The province of Quebec is divided into units at the regional, supralocal and local levels. The primary types of subdivision are administrative regions, regional county municipalities (RCMs), metropolitan communities (CMs), the Kativik Regional Government (KRG), unorganized territories (TNOs), agglomerations, northern villages, Cree villages, Naskapi villages, and a variety of local units which may collectively be referred to as local municipalities and boroughs.

In English versions of provincial statutes, English names are used for the generic names of government bodies and administrative subdivisions and French ones in proper names, except when the body itself is bilingual. In such cases the existence of an official English name is usually the result of a specific legal provision to that effect. For example, official nomenclature is "ten regional county municipalities", but "An Act respecting the Municipalité régionale de comté du Bas-Richelieu". On the other hand, "Kativik Regional Government" is used in English because the legislation that created it specifically provides for English and Inuktitut names alongside the French one.

The use of acronyms is divided, however, as the acronyms corresponding to the English generic terms are not always in use. Thus one writes "ten RCMs", "the MRC du Bas-Richelieu", "five regional conferences of elected officers" and "five CREs". 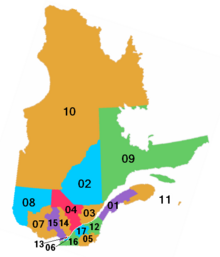 While CMs may overlap with various administrative regions, RCMs are each wholly contained within a single region, as is the sole regional government, the Kativik Regional Government. RCMs and CMs may also overlap.

In addition to local municipalities, unorganized territories or TNOs (territoires non organisés) may also fall under the jurisdiction of an RCM or of the Kativik Regional Government. Although they are not municipalities, TNOs will be considered "local municipal units" for the purposes of the discussion below.

Local municipalities not belonging to an RCM

The 29 local municipal units of various descriptions (see below) under the jurisdiction of the Kativik Regional Government do not belong to any RCM. Their total population in 2001 was 10,420.

There are a further 47 Aboriginal local municipal units (30 Indian reserves, 8 Cree villages, 8 lands reserved for the Cree and 1 land reserved for the Naskapi, with a total population in 2001 of 48,082) which do not fall under the jurisdiction of an RCM.

Indian reserves differ from Cree, Naskapi and northern villages in the relatively greater role played in the former by the federal government, as opposed to the provincial one, in many areas ordinarily of provincial jurisdiction such as education, health and local government organization.

In all, Quebec has some 86 regional county municipalities or RCMs. RCMs deal with issues requiring coordination between neighbouring local municipalities such as waste management and public transportation.

The powers of the RCM are exercised by the RCM council (conseil de MRC). It is composed of the mayors of each of the member municipalities and possibly other elected municipal officials as well as a warden (préfet). Depending on the RCM, a warden can either be appointed by the council (in which case the warden must be one of the mayors) or elected by universal suffrage (in which case they cannot hold any other elective office).

The voting strength of each municipality on the council is determined in part by its population, but a formula is used to prevent a small number of large municipalities from making decisions unilaterally.

CMs have responsibility for areas of common interest to their constituent municipalities such as urban planning, economic development, promotion of international trade, artistic and cultural development, public transportation and waste management. Each CM also has specific areas of jurisdiction defined by the legislation governing it.

The CMM comprises 82 local municipalities in all, of which 21 do not belong to any RCM, including Montreal itself. The CMM further encompasses the entire territory of four RCMs and parts of another six RCMs.

The CMQ consists of some 28 local municipalities, of which four do not belong to an RCM, including Quebec City itself. The CMQ also covers all of MRC de L'Île-d'Orleans and parts of La Côte-de-Beaupré and La Jacques-Cartier RCMs.

The Kativik Regional Government or KRG (Administration régionale Kativik), located in the Nord-du-Québec region, serves a primarily Inuit population. In addition to the usual functions of RCMs, the KRG exercises powers devolved to the Inuit of Quebec in recognition of their right to self-government. These include, among other things, jurisdiction over police, transportation, communications and labour.

The KRG is composed of 14 northern villages or VNs ("villages nordiques"), 12 "Category I lands for the Inuit" or TIs (terres de la catégorie I pour les Inuit), one Naskapi village or VK (village naskapi) and two unorganized territories or TNOs ("territoires non-organisés").

Some areas are not part of any local municipality. These are known as unorganized territories or TNOs (territoires non-organisés). Municipal authority in TNOs is exercised directly by the MRC to which they belong (or the KRG, as the case may be).

In addition to local municipalities, there are two other kinds of administrative entity at the local level which are not general features of municipal organization in Quebec, but which occur in a limited number of areas, especially urban ones, and retain some features of previous states of municipal organization in those areas. These are the borough (or arrondissement), which is submunicipal, and the agglomeration (agglomération), which may group together a number of local municipalities.

There are 1,117 local municipalities in Quebec. This figure is excluding northern villages (VN), Cree villages (VC) and the Naskapi village (VK), as well as their associated reserved lands (TI, TC and TK).

At the beginning of the 2000s, the Quebec government carried out a program of municipal mergers, hoping thereby to achieve economies of scale in municipal expenditures and greater fiscal equity. As a result, cities such as Montreal, Quebec, Hull and Chicoutimi absorbed neighbouring municipalities in 2002 (occasionally changing their names in the process, as Hull and Chicoutimi did). After a change of provincial government, it was decided to hold "demerger" referendums in the former municipalities which had merged, and some of these decided to reclaim their status as municipalities. These municipalities were reconstituted in 2006. However, many features of the organization of the original merged cities were retained, including shared fiscal responsibility for a number of matters that would ordinarily be handled at the municipal level. Hence when the new, merged cities were turned into "agglomerations" (agglomérations), the reconstituted municipalities recovered only part of their autonomy. Most notably, the entire Island of Montreal forms a single agglomeration.

Powers of the agglomeration

The City of Montreal website lists the following areas of jurisdiction for the agglomeration council (some of these are RCM powers that would not be exercised by most agglomerations):[2]

Powers of the reconstituted municipality

The functions of a reconstituted municipality vary by agglomeration and by municipality, but generally relate to what are called compétences de proximité, known as "local powers" in English. The Ministère des affaires municipales et régionales website [1] lists some of these.

Currently, eight local municipalities in Quebec are divided into boroughs. These are Montreal, Quebec City, Longueuil, Sherbrooke, Saguenay, Lévis, Métis-sur-Mer and Grenville-sur-la-Rouge. In many cases, boroughs correspond to municipalities that existed before amalgamation in 2002.

Types of municipalities in Quebec