Adelaide city centre is the inner city locality of Greater Adelaide, the capital city of South Australia. It is known by locals simply as "The City" or "Town" to distinguish it from Greater Adelaide and from the City of Adelaide local government area (which also includes North Adelaide and the Park Lands around the whole city centre). Due to the construction of many new apartments in the city, the population has grown over ten years from 10,229 (2006 census) to 15,115 (2016 census).

Adelaide was planned based on a grid layout featuring streets that run at right angles to each other, surrounded by gardens and parks. Within the city centre, there are other designations used to describe various areas, the broadest being:

Other well-known institutions within the city centre are the Adelaide Central Market, Victoria Square and Rundle Mall shopping area. 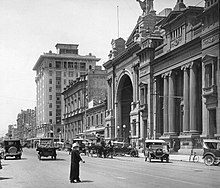 Before the British colonisation of South Australia, the Adelaide Plains, on which Adelaide was built, were home to the Kaurna group of Aboriginal Australians. The colony of South Australia was established in 1836 at Glenelg, and the city itself established in 1837. The location and characteristic grid layout of the city and North Adelaide, as well as the surrounding parklands, were the result of the work of Colonel William Light (1786–1839), who was the first Surveyor General of South Australia. The area where the Adelaide city centre now exists was once known as "Tarndanya",[4] the Kaurna word for as "male red kangaroo rock", which was the name used for an area along the south bank of what is now known as the River Torrens (Karrawiri Pari), which flows through Adelaide. 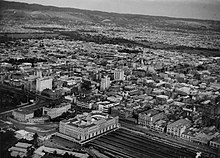 Adelaide was not as badly affected by the 1860s economic depression in Australia as other gold rush cities like Sydney and Melbourne, allowing it to prosper. Historian F.W. Crowley noted that the city was full of elite upper-class citizens which provided a stark contrast to the grinding poverty of the labour areas and slums outside the inner city ring. Due to its historic wealth during the 20th century, the city retains a notable portion of Victorian architecture.[citation needed] 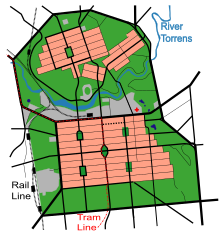 Adelaide is separated from its greater metropolitan area by a ring of public parklands on all sides. The so-called "square mile" within the park lands is defined by a small area of high rise office and apartment buildings in the centre north, around King William Street, which runs north-to-south through the centre. Surrounding this central business district are a large number of medium to low density apartments, townhouses and detached houses which make up the residential portion of the city centre.

The layout of Adelaide, known as Light's Vision, features a cardinal direction grid pattern of wide streets and terraces and five large public squares: Victoria Square in the centre of the city, and Hindmarsh, Light, Hurtle and Whitmore Squares in the centres of each of the four quadrants of the Adelaide city centre. These squares occupy 32 of the 700 numbered "town acre" allotments on Light's plan.

All east-west roads change their names as they cross King William Street, except for North and South terraces.[5] They also alternate between being wide and narrow, 99 and 66 feet (30 and 20 m), except for the central Grote and Wakefield which are extra-wide, 132 feet (40 m),[6] along with the surrounding four terraces.[7] In the south half of the city, in several places the Adelaide City Council has constructed wide footpaths and road markings to restrict traffic to a lesser number of lanes than the full width of the road could support.[citation needed]

The street pairs, design widths, and town acres in Light's Vision are illustrated in this diagram: 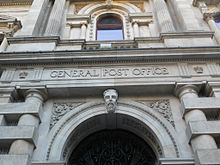 The streets and squares were named by a committee of a number of prominent settlers after themselves, after early directors of the South Australian Company, after Colonisation Commissioners of South Australia (appointed by the British government to oversee implementation of the acts that established the colony), and after various notables involved in the establishment of the colony.

All members of the committee (except Stephens) had one or more of the streets and squares in the Adelaide city centre and North Adelaide named after themselves. Brown Street, named for John Brown, was subsequently subsumed as a continuation of Morphett Street in 1967. In the same year, Hanson Street, named for Richard Hanson, was subsumed as a continuation of Pulteney Street.

The squares were named after:

Most of these people did not reside in or visit South Australia.

Dual naming of squares and parklands

The Adelaide City Council began the process of dual naming all of the city squares, each of the parks making up the parklands which surround the city centre and North Adelaide, and other sites of significance to the Kaurna people in 1997.[15] The naming process, which assigned an extra name in the Kaurna language to each place, was mostly completed in 2003,[16] and the renaming of 39 sites finalised and endorsed by the council in 2012.[17]

The City of Adelaide Council has defined a number of neighbourhood precincts in the city centre, each with a character of their own:

At federal level, Adelaide is within the Division of Adelaide, a marginal seat which historically has alternated between the Liberal and Labor parties. It has been held since 2004 by Kate Ellis of the Labor party.[23]

In the South Australian House of Assembly, Adelaide is within the Electoral district of Adelaide. Since the March 2010 state election, the seat has been held by Rachel Sanderson of the Liberal party. 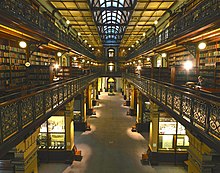 Adelaide's cultural and entertainment precincts/venues are generally concentrated in the city centre. They include the Convention Centre, Entertainment Centre and the redeveloped Adelaide Oval. Additionally, most of the events relating to the Adelaide Festival and Adelaide Fringe are held within Adelaide's city centre during February and March. This time is known as "Mad March", due to the large number of other cultural festivities at the same time, including the Adelaide 500 and WOMADelaide. North Terrace is considered Adelaide's "cultural boulevard" because of its tight concentration of galleries and museums. 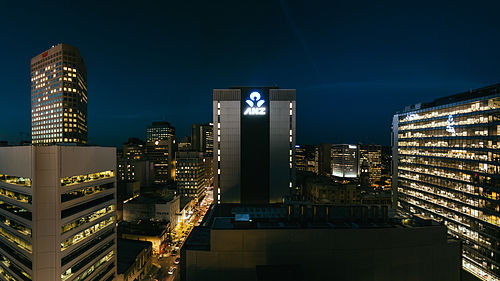 Part of Adelaide CBD at night. (Looking east from Bentham Street, with Waymouth Street to the left, 2014
Pictures of Adelaide city centre skyline