The area has been inhabited since the earliest times and many civilisations have settled there. There are places of historical interest that attract visitors. Nemrud Dağı is a major site of interest there, noted for its sanctuary of statues built by Antiochus I Theos of Commagene. It is accessed through the town of Kâhta.

A branch of the large Atatürk reservoir lies between Adıyaman and the town of Samsat.

Until the 1950s, Adıyaman was a city in the province of Malatya. It was made into a province in its own right, on 1 December 1954, as a reward for voting for the winning Democratic Party in the 1954 general election.[3]

Adıyaman has since proved relatively high vote shares for Islamist politician, Necmettin Erbakan. His movement (then, the National Salvation Party) scored a landmark 15% there in 1973 a few years after its modest beginning, and his score went on to gradually increase. After being damaged by the military coup in 1980, Erbakan's party (which had become the Welfare Party) came back to win the province with 29.24% and 27% in 1994 and 1999, respectively.[6][7] 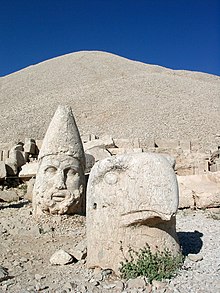 Some of the statues near the peak of Mount Nemrut