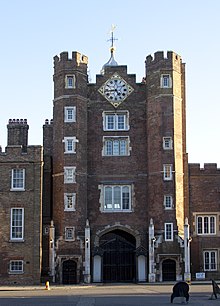 In the United Kingdom, the Accession Council is a ceremonial body which assembles in St James's Palace upon the death of a monarch (Demise of the Crown), to make formal proclamation of the accession of the successor to the throne. Under the terms of the Act of Settlement 1701, a new monarch succeeds automatically. The proclamation merely confirms by name the identity of the heir who has succeeded. 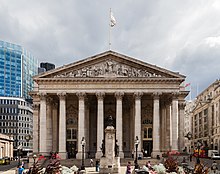 The final public reading in London is at the steps of the Royal Exchange building.

The council's Proclamation of Accession, which confirms the name of the heir, is signed by all the attendant Privy Counsellors. The proclamation is traditionally read out at several locations in London, Edinburgh, Windsor, and York. It may also be read at a central location in a town or village.[citation needed]

The most recent proclamation was as follows:

Whereas it has pleased Almighty God to call to His Mercy our late Sovereign Lord King George the Sixth of Blessed and Glorious memory, by whose Decease the Crown is solely and rightfully come to the High and Mighty Princess Elizabeth Alexandra Mary:
WE, therefore, the Lords Spiritual and Temporal of this Realm, being here assisted with these His late Majesty's Privy Council, with representatives of other Members of the Commonwealth, with other Principal Gentlemen of Quality, with the Lord Mayor, Aldermen, and Citizens of London, do now hereby with one voice and Consent of Tongue and Heart publish and proclaim that the High and Mighty Princess Elizabeth Alexandra Mary is now, by the death of our late Sovereign of happy memory, become Queen Elizabeth the Second, by the Grace of God Queen of this Realm and of all Her other Realms and Territories, Head of the Commonwealth, Defender of the Faith, to whom Her lieges do acknowledge all Faith and constant Obedience with hearty and humble Affection, beseeching God by whom Kings and Queens do reign, to bless the Royal Princess Elizabeth the Second with long and happy Years to reign over us.[1]

Though proclamations have been worded broadly the same, they also vary as necessary. In the case of Victoria, certain words were included (having regard to section 2 of the Regency Act 1830 prescribing the Oath of Allegiance) which expressly reserved the rights of any child of the late king, William IV, which might be borne to his widow, Adelaide of Saxe-Meiningen.[2] In the case of George VI, the proclamation was reworded because Edward VIII had abdicated, rather than died, and "Emperor of India" was added at the end of the list of titles until that title was relinquished by George VI.[citation needed]

The proclamation has been ceremonially read out in various locations around the United Kingdom. By custom, it is usually first read from the Friary Court balcony at St James's Palace by the heralds of the College of Arms. The heralds proceed to travel and read it at various points in London (including Trafalgar Square, and the original site of Temple Bar on Fleet Street) until they reach the Royal Exchange where it is read in the presence of the Lord Mayor of London and other officials. Likewise, the heralds of the Court of the Lord Lyon also publicly read the proclamation from Mercat Cross in Edinburgh.[citation needed]

Once the monarch makes a sacred oath to the council, the Garter King of Arms steps onto the Proclamation Gallery which overlooks Friary Court to announce the new monarch.[4][5]

Queen Elizabeth II was in Kenya when she acceded to the throne, and the Accession Council therefore met twice, first for the proclamation and again so that the new Queen could take the oath.[citation needed].

Upon accession, a new sovereign is also required to make what is known as the Accession Declaration. This is not usually made at a meeting of the Accession Council but in the presence of Parliament on the first State Opening following the monarch's accession to the throne or at his coronation, whichever occurs first. King George VI made the declaration at his coronation.[6] In addition to the above oath and declaration, should a monarch have a coronation, he or she makes a Coronation Oath which contains references to the Church of England.[citation needed]

The King is dead. Long live the King!

Further information: The king is dead, long live the king!

While "The King is dead. Long live the King" is commonly believed to be part of the official text of the Proclamation of Accession read out following the decision of the Accession Council as to the rightful heir to the throne, it is in fact only tradition that causes it to be recited immediately after the proclamation is read aloud in many villages and towns.[citation needed]