Arcadia (Greek: Αρκαδία, romanized: Arkadía Modern Greek: [ɐr.kɐˈði.ɐ]) is one of the regional units of Greece. It is part of the administrative region of Peloponnese. It is situated in the central and eastern part of the Peloponnese peninsula. It takes its name from the mythological figure Arcas. In Greek mythology, it was the home of the god Pan. In European Renaissance arts, Arcadia was celebrated as an unspoiled, harmonious wilderness.

Arcadia is a rural, mountainous regional unit comprising about 18% of the land area of the Peloponnese peninsula. It is the peninsula's largest regional unit. According to the 2011 census, it has about 86,000 inhabitants; its capital, Tripoli, has about 30,000 residents in the city proper, and about 47,500 total in the greater metropolitan area.[1]

Arcadia consists partly of farmland, and to a larger extent grassland and degenerated shrubland. It also has three mountain ranges, with forestation mainly at altitudes above 1000 meters: Mainalo, a winter ski resort, situated in the central north; Parnon in the central south; and Mount Lykaion, famous for the ancient history and myths associated with it, in the southwest.

Its climate features hot summers and mild winters in the east, the south, and those parts of the central area that are less than 1000 meters above sea level. Fall and winter are mostly rainy, except in the mountains to the west and north, Taygetus and Mainalo, which are snowy in winter.

Arcadia is almost totally mountainous and part of the "carbonate platform" (calcareous or limestone deposits) of the Peloponnese. The whole peninsula was formed by intense tectonics (faults, overthrusts and regional metamorphism).[2] In Arcadia's central part around the Tripoli region developed a special form of topography, a geologically fascinating phenomenon: There are several plains and "intra mountainous basins", even "closed basins": The 30 km long "Tripoli-Plateau", "Argon Pedion", Basin of Levidi, Basin of Vlacherna Arcadia/Hotoussa/Kandila.[3]

The peculiarity of the plains and basins is a result of intensive karstification: Water seeps into the underground, rather than eroding and draining the topography by surface waterways. All drainage runs through ponors (in Greek: καταβόθρες) and subterranean waterways.[4][5] The additional problem for rural activities in the basins: When winter rains are heavy, the ground is flooded or temporary lakes arise, even today, as drainage through katavothres is often too slow to start cultivation in due time. 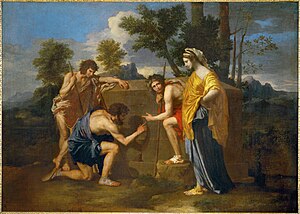 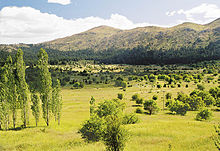 After the collapse of the Roman power in the west, Arcadia remained as part of the Greek-speaking Byzantine Empire. Arcadia remained a beautiful, secluded area, and its inhabitants became proverbial as herdsmen leading simple pastoral unsophisticated yet happy lives, to the point that Arcadia may refer to some imaginary idyllic paradise, immortalized by Virgil's Eclogues, and later by Jacopo Sannazaro in his pastoral masterpiece, Arcadia (1504); see also Arcadia (utopia).

After the Fourth Crusade, the area became a part of the Principality of Achaea, but was progressively recovered by the Byzantine Greeks of the Despotate of the Morea from the 1260s on, a process that was completed in 1320. The region fell into the hands of the Ottoman Turks in 1460. With the exception of a period of Venetian rule in 1687–1715, the region remained under Turkish control until 1821.

The Latin phrase Et in Arcadia ego, which is usually interpreted to mean "Even in Arcadia there am I", is an example of memento mori, a cautionary reminder of the transitory nature of life and the inevitability of death. The phrase is most often associated with a 1647 painting by Nicolas Poussin, also known as "The Arcadian Shepherds". In the painting the phrase appears as an inscription on a tomb discovered by youthful figures in classical garb.

Commander Panagiotis Kephalas raising the Maniot flag in Tripoli (Tripolitsa), the capital of Arcadia, after the successful siege.

Arcadia was one of the centres of the Greek War of Independence which saw victories in their battles including one in Tripoli. After a victorious revolutionary war, Arcadia was finally incorporated into the newly created Greek state. Arcadia saw economic growth and small emigration.

In the 20th century, Arcadia experienced extensive population loss through emigration, mostly to the Americas. Many Arcadian villages lost half their inhabitants, and fears arose that they would turn into ghost towns. Arcadia now has a smaller population than Corinthia. Demographers expected that its population would halve between 1951 and the early 21st century. The population has fallen to 87,000 in 2011.

An earthquake measuring 5.9 on the Richter magnitude scale shook Megalopoli and the surrounding area in 1965. Large numbers of buildings were destroyed, leaving people homeless. Within a couple of years, the buildings were rebuilt anti-seismically. This earthquake revealed an underground source of lignite in the area, and in 1967 construction began on the Megalopoli Power Plant, which began operating in 1970. The mining area south of the plant is the largest mining area in the peninsula and continues to the present day with one settlement moved.

In July and August 2007 forest fires caused damage in Arcadia, notably in the mountains.

In 2008, a theory proposed by classicist Christos Mergoupis suggested that the mummified remains of Alexander the Great (not his actual tomb), may in fact be located in Gortynia-Arkadia, in the Peloponnese of Greece. Since 2008, this research is ongoing and currently being conducted in Greece. The research was first mentioned on CNN International in May 2008.[6][7]

When, during the Greek Dark Ages (c. 1200 BC–800 BC), Doric Greek was introduced to the Peloponnese, the older Arcadocypriot Greek language apparently survived in Arcadia. Arcadocypriot never became a literary dialect, but it is known from inscriptions. Tsan is a letter of the Greek alphabet occurring only in Arcadia, shaped like Cyrillic И; it represents an affricate that developed from labiovelars in context where they became t in other dialects.

The Tsakonian language, still spoken on the coast of modern Arcadia (but in the Classical period considered the southern Argolid coast immediately adjoining Arcadia), is a descendant of Doric Greek, and as such is an extraordinary example of a surviving regional dialect of Greek. The principal cities of Tsakonia are the Arcadian coastal towns of Leonidio and Tyros.

The regional unit Arcadia is subdivided into 5 municipalities. These are (number as in the map in the infobox):[8]

As a part of the 2011 Kallikratis government reform, the regional unit Arcadia was created out of the former prefecture Arcadia (Greek: Νομός Αρκαδίας). The prefecture had the same territory as the present regional unit. At the same time, the municipalities were reorganised, according to the table below.[8]

Arcadia was divided into four provinces:

Note: Provinces no longer hold any legal status in Greece.

Ancient and modern towns and cities

A thermoelectric power station which produces electricity for most of southern Greece, operates to the south of Megalopolis, along with a coal mine.

In agriculture, potato farms (dominant in central and northcentral Arcadia), mixed farming, olive groves, and pasture dominate the plains of Arcadia, especially in the area around Megalopolis and between Tripoli and Levidi.

The Moreas Motorway (A7, E65) highway connects Tripoli with Corinth and Athens. It is being extended further southwest to Megalopoli and Kalamata.

Arcadia has two tunnels. The Artemisio Tunnel opened first, followed by the tunnel east of Megalopolis; both serve traffic flowing between Messenia and Athens.

Arcadia is the name of the space battleship of captain Harlock