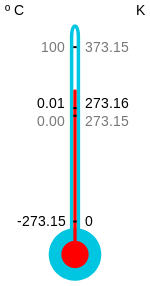 Absolute zero is the lowest limit of the thermodynamic temperature scale, a state at which the enthalpy and entropy of a cooled ideal gas reach their minimum value, taken as zero kelvins. The fundamental particles of nature have minimum vibrational motion, retaining only quantum mechanical, zero-point energy-induced particle motion. The theoretical temperature is determined by extrapolating the ideal gas law; by international agreement, absolute zero is taken as −273.15° on the Celsius scale (International System of Units),[1][2] which equals −459.67° on the Fahrenheit scale (United States customary units or Imperial units).[3] The corresponding Kelvin and Rankine temperature scales set their zero points at absolute zero by definition.

It is commonly thought of as the lowest temperature possible, but it is not the lowest enthalpy state possible, because all real substances begin to depart from the ideal gas when cooled as they approach the change of state to liquid, and then to solid; and the sum of the enthalpy of vaporization (gas to liquid) and enthalpy of fusion (liquid to solid) exceeds the ideal gas's change in enthalpy to absolute zero. In the quantum-mechanical description, matter (solid) at absolute zero is in its ground state, the point of lowest internal energy.

Scientists and technologists routinely achieve temperatures close to absolute zero, where matter exhibits quantum effects such as superconductivity and superfluidity.

At temperatures near 0 K (−273.15 °C; −459.67 °F), nearly all molecular motion ceases and ΔS = 0 for any adiabatic process, where S is the entropy. In such a circumstance, pure substances can (ideally) form perfect crystals as T → 0. Max Planck's strong form of the third law of thermodynamics states the entropy of a perfect crystal vanishes at absolute zero in which a perfect crystal is gone. The original Nernst heat theorem makes the weaker and less controversial claim that the entropy change for any isothermal process approaches zero as T → 0:

The implication is that the entropy of a perfect crystal approaches a constant value.

The Nerst postulate identifies the isotherm T = 0 as coincident with the adiabat S = 0, although other isotherms and adiabats are distinct. As no two adiabats intersect, no other adiabat can intersect the T = 0 isotherm. Consequently no adiabatic process initiated at nonzero temperature can lead to zero temperature. (≈ Callen, pp. 189–190)

A perfect crystal is one in which the internal lattice structure extends uninterrupted in all directions. The perfect order can be represented by translational symmetry along three (not usually orthogonal) axes. Every lattice element of the structure is in its proper place, whether it is a single atom or a molecular grouping. For substances that exist in two (or more) stable crystalline forms, such as diamond and graphite for carbon, there is a kind of chemical degeneracy. The question remains whether both can have zero entropy at T = 0 even though each is perfectly ordered.

Perfect crystals never occur in practice; imperfections, and even entire amorphous material inclusions, can and do get "frozen in" at low temperatures, so transitions to more stable states do not occur.

Using the Debye model, the specific heat and entropy of a pure crystal are proportional to T 3, while the enthalpy and chemical potential are proportional to T 4. (Guggenheim, p. 111) These quantities drop toward their T = 0 limiting values and approach with zero slopes. For the specific heats at least, the limiting value itself is definitely zero, as borne out by experiments to below 10 K. Even the less detailed Einstein model shows this curious drop in specific heats. In fact, all specific heats vanish at absolute zero, not just those of crystals. Likewise for the coefficient of thermal expansion. Maxwell's relations show that various other quantities also vanish. These phenomena were unanticipated.

Since the relation between changes in Gibbs free energy (G), the enthalpy (H) and the entropy is

thus, as T decreases, ΔG and ΔH approach each other (so long as ΔS is bounded). Experimentally, it is found that all spontaneous processes (including chemical reactions) result in a decrease in G as they proceed toward equilibrium. If ΔS and/or T are small, the condition ΔG < 0 may imply that ΔH < 0, which would indicate an exothermic reaction. However, this is not required; endothermic reactions can proceed spontaneously if the TΔS term is large enough.

Moreover, the slopes of the derivatives of ΔG and ΔH converge and are equal to zero at T = 0. This ensures that ΔG and ΔH are nearly the same over a considerable range of temperatures and justifies the approximate empirical Principle of Thomsen and Berthelot, which states that the equilibrium state to which a system proceeds is the one that evolves the greatest amount of heat, i.e., an actual process is the most exothermic one. (Callen, pp. 186–187)

A Bose–Einstein condensate (BEC) is a state of matter of a dilute gas of weakly interacting bosons confined in an external potential and cooled to temperatures very near absolute zero. Under such conditions, a large fraction of the bosons occupy the lowest quantum state of the external potential, at which point quantum effects become apparent on a macroscopic scale.[5]

This state of matter was first predicted by Satyendra Nath Bose and Albert Einstein in 1924–25. Bose first sent a paper to Einstein on the quantum statistics of light quanta (now called photons). Einstein was impressed, translated the paper from English to German and submitted it for Bose to the Zeitschrift für Physik, which published it. Einstein then extended Bose's ideas to material particles (or matter) in two other papers.[6]

Seventy years later, in 1995, the first gaseous condensate was produced by Eric Cornell and Carl Wieman at the University of Colorado at Boulder NIST-JILA lab, using a gas of rubidium atoms cooled to 170 nanokelvins (nK)[7] (1.7×10−7 K).[8]

A record cold temperature of 450 ± 80 picokelvins (pK) (4.5×10−10 K) in a BEC of sodium atoms was achieved in 2003 by researchers at Massachusetts Institute of Technology (MIT).[9] The associated black-body (peak emittance) wavelength of 6,400 kilometers is roughly the radius of Earth.

Absolute, or thermodynamic, temperature is conventionally measured in kelvins (Celsius-scaled increments) and in the Rankine scale (Fahrenheit-scaled increments) with increasing rarity. Absolute temperature measurement is uniquely determined by a multiplicative constant which specifies the size of the degree, so the ratios of two absolute temperatures, T2/T1, are the same in all scales. The most transparent definition of this standard comes from the Maxwell–Boltzmann distribution. It can also be found in Fermi–Dirac statistics (for particles of half-integer spin) and Bose–Einstein statistics (for particles of integer spin). All of these define the relative numbers of particles in a system as decreasing exponential functions of energy (at the particle level) over kT, with k representing the Boltzmann constant and T representing the temperature observed at the macroscopic level.[1]

On 3 January 2013, physicists announced that for the first time they had created a quantum gas made up of potassium atoms with a negative temperature in motional degrees of freedom.[11] 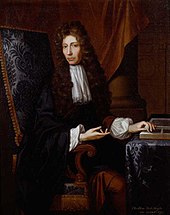 Robert Boyle pioneered the idea of an absolute zero

One of the first to discuss the possibility of an absolute minimal temperature was Robert Boyle. His 1665 New Experiments and Observations touching Cold, articulated the dispute known as the primum frigidum.[12] The concept was well known among naturalists of the time. Some contended an absolute minimum temperature occurred within earth (as one of the four classical elements), others within water, others air, and some more recently within nitre. But all of them seemed to agree that, "There is some body or other that is of its own nature supremely cold and by participation of which all other bodies obtain that quality."[13]

Limit to the "degree of cold"

The question whether there is a limit to the degree of coldness possible, and, if so, where the zero must be placed, was first addressed by the French physicist Guillaume Amontons in 1702, in connection with his improvements in the air thermometer. His instrument indicated temperatures by the height at which a certain mass of air sustained a column of mercury—the volume, or "spring" of the air varying with temperature. Amontons therefore argued that the zero of his thermometer would be that temperature at which the spring of the air was reduced to nothing. He used a scale that marked the boiling point of water at +73 and the melting point of ice at +​51 1⁄2, so that the zero was equivalent to about −240 on the Celsius scale.[14] Amontons held that the absolute zero cannot be reached, so never attempted to compute it explicitly.[15] The value of −240 °C, or "431 divisions [in Fahrenheit's thermometer] below the cold of freezing water"[16] was published by George Martine in 1740.

Values of this order for the absolute zero were not, however, universally accepted about this period. Pierre-Simon Laplace and Antoine Lavoisier, in their 1780 treatise on heat, arrived at values ranging from 1,500 to 3,000 below the freezing point of water, and thought that in any case it must be at least 600 below. John Dalton in his Chemical Philosophy gave ten calculations of this value, and finally adopted −3,000 °C as the natural zero of temperature.

After James Prescott Joule had determined the mechanical equivalent of heat, Lord Kelvin approached the question from an entirely different point of view, and in 1848 devised a scale of absolute temperature that was independent of the properties of any particular substance and was based on Carnot's theory of the Motive Power of Heat and data published by Henri Victor Regnault.[18] It followed from the principles on which this scale was constructed that its zero was placed at −273 °C, at almost precisely the same point as the zero of the air thermometer.[14] This value was not immediately accepted; values ranging from −271.1 °C (−455.98 °F) to −274.5 °C (−462.10 °F), derived from laboratory measurements and observations of astronomical refraction, remained in use in the early 20th century.[19]

The race to absolute zero

With a better theoretical understanding of absolute zero, scientists were eager to reach this temperature in the lab.[20] By 1845, Michael Faraday had managed to liquefy most gases then known to exist, and reached a new record for lowest temperatures by reaching −130 °C (−202 °F; 143 K). Faraday believed that certain gases, such as oxygen, nitrogen, and hydrogen, were permanent gases and could not be liquefied.[21] Decades later, in 1873 Dutch theoretical scientist Johannes Diderik van der Waals demonstrated that these gases could be liquefied, but only under conditions of very high pressure and very low temperatures. In 1877, Louis Paul Cailletet in France and Raoul Pictet in Switzerland succeeded in producing the first droplets of liquid air −195 °C (−319.0 °F; 78.1 K). This was followed in 1883 by the production of liquid oxygen −218 °C (−360.4 °F; 55.1 K) by the Polish professors Zygmunt Wróblewski and Karol Olszewski.

Scottish chemist and physicist James Dewar and Dutch physicist Heike Kamerlingh Onnes took on the challenge to liquefy the remaining gases, hydrogen and helium. In 1898, after 20 years of effort, Dewar was first to liquefy hydrogen, reaching a new low-temperature record of −252 °C (−421.6 °F; 21.1 K). However, Kamerlingh Onnes, his rival, was the first to liquefy helium, in 1908, using several precooling stages and the Hampson–Linde cycle. He lowered the temperature to the boiling point of helium −269 °C (−452.20 °F; 4.15 K). By reducing the pressure of the liquid helium he achieved an even lower temperature, near 1.5 K. These were the coldest temperatures achieved on Earth at the time and his achievement earned him the Nobel Prize in 1913.[22] Kamerlingh Onnes would continue to study the properties of materials at temperatures near absolute zero, describing superconductivity and superfluids for the first time. 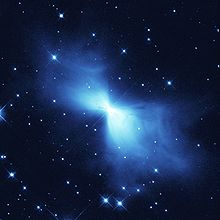 The rapid expansion of gases leaving the Boomerang Nebula, a bi-polar, filamentary, likely proto-planetary nebula in Centaurus, causes the lowest-observed temperature outside a laboratory: 1 K

Absolute zero cannot be achieved, although it is possible to reach temperatures close to it through the use of cryocoolers, dilution refrigerators, and nuclear adiabatic demagnetization. The use of laser cooling has produced temperatures less than a billionth of a kelvin.[25] At very low temperatures in the vicinity of absolute zero, matter exhibits many unusual properties, including superconductivity, superfluidity, and Bose–Einstein condensation. To study such phenomena, scientists have worked to obtain even lower temperatures.