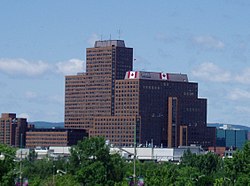 Crown-Indigenous Relations and Northern Affairs Canada (CIRNAC; French: Relations Couronne-Autochtones et des Affaires du Nord Canada (RCAANC)) is the department of the Government of Canada responsible for Canada's northern lands and territories, and one of two departments with responsibility for policies relating to Indigenous peoples in Canada (the other being Indigenous Services Canada).

The department is overseen by two cabinet ministers, the Minister of Crown–Indigenous Relations (whose portfolio includes treaty rights and land negotiations) and the Minister of Northern Affairs.[1] Its headquarters were in Terrasses de la Chaudière, in downtown Gatineau, Quebec.[2]

Restructuring of the Former Indian Affairs and Northern Development Canada

In August 2017, the Trudeau government announced the dissolution of Indigenous and Northern Affairs Canada and announced that it will be replaced by Indigenous Services Canada (ISC) and Crown-Indigenous Relations and Northern Affairs Canada (CIRNAC).[3][4] This came into effect as of July 15, 2019.[5] The transition was not instantaneous, with Orders-in-Council initially separating the portfolios, and formal legislation constituting the new departments being passed in July 2019.[6][7]

According to Trudeau, the rationale behind the restructuring was that "the structures in place at Indigenous and Northern Affairs Canada were created at a time where the approach around the Indian Act, the approach around our engagement with indigenous peoples, was very much looked at in a paternalistic, colonial way". The new departments are consistent with the 1996 Royal Commission on Aboriginal Peoples' recommendations to improve the delivery of services dramatically and fast-track self-government.[1]

First Nation,[8] has been used since the 1970s instead of the word "Indian", which some people found offensive.[9] The term "Indian" is used for legal and historical documents such as Status Indians as defined by the Indian Act. For example, the term "Indian" continues to be used in the historical and legal document, the Canadian Constitution and federal statutes. Aboriginal Affairs and Northern Development Canada used the term Inuit in referring to "an Aboriginal people in Northern Canada, who live in Nunavut, Northwest Territories, Northern Quebec and Northern Labrador. The word means "people" in the Inuit language — Inuktitut. The singular of Inuit is Inuk." [9] Eskimo is found in historical documents about Canadian Inuit. The term "Aboriginal" is commonly used when referring to the three groups of indigenous peoples (First Nations, Inuit, and Métis) as a whole.[9] It is also used by Aboriginal people who live within Canada who claim rights of sovereignty or Aboriginal title to lands.

CIRNAC is one of the federal government departments responsible for meeting the Government of Canada's obligations and commitments to First Nations, Inuit and Métis, and for fulfilling the federal government's constitutional responsibilities in the North. The department's responsibilities are largely determined by numerous statutes, negotiated agreements and relevant legal decisions. Most of the department's programs, representing a majority of its spending - are delivered through partnerships with Aboriginal communities and federal-provincial or federal-territorial agreements. CIRNAC also works with urban Indigenous people, Métis and Non-Status Indians (many of whom live in rural areas).[10]

CIRNAC supports indigenous peoples (First Nations, Inuit and Métis) and Northerners in their efforts to:

CIRNAC also works with urban First Nations, Métis and Non-Status Indians (many of whom live in rural areas) through the Office of the Federal Interlocutor.[11] CIRNAC also manages the resources of federal lands, including land and subsurface leases and resource royalties.

The federal government's legislative responsibilities for Indians and Inuit derive from section 91(24) of the Constitution Act, 1867 and responsibility was given to the Secretary of State for the Provinces Responsible for Indian Affairs. In 1876, the Indian Act, which remains the major expression of federal jurisdiction in this area, was passed and a series of treaties[12] were concluded between Canada and the various Indian bands across the country.

The responsibility for Indian Affairs and Northern Development rested with various government departments between 1873 and 1966. The Minister of the Interior also held the position of Superintendent-General of Indian Affairs after the Indian Affairs Department was established in 1880. In 1939, federal jurisdiction for Indian peoples was interpreted by the courts to apply to the Inuit. A revised Indian Act was passed in 1951.

From 1950 to 1965, the Indian Affairs portfolio was carried by the Minister of Citizenship and Immigration. On October 1, 1966, the Department of Indian Affairs and Northern Development was created as a result of the Government Organization Act, 1966.[13] Effective June 13, 2011, the department began using the applied title Aboriginal Affairs and Northern Development Canada in addition to the legal name of the department.[14]

Beginning in the early 20th century, the Government of Canada sponsored annual expeditions to the Canadian North. These expeditions yielded extensive photographic documentation of the lives of northern indigenous peoples by participating explorers, engineers, scientists and medical staff.

Explorer, photographer, filmmaker, writer and lecturer Richard S. Finnie accompanied numerous expeditions to the North. His first voyage was aboard CGS Arctic, under the command of Captain Bernier in 1924. During the 1930–1931 expedition to the Western Arctic, Finnie served as filmmaker. Lachlan T. Burwash, an exploratory engineer with the Department of the Interior, made a survey of the east coasts of Hudson Bay and James Bay, and the Belcher Islands in the late 1920s.

Zoologist Joseph Dewey Soper travelled to the Baffin Island (Qikiqtaaluk) region in the late 1920s in order to document the landscape, as well as the plant and bird life. J.G. Wright, Superintendent of Eastern Arctic Patrol and National Film Board photographer, served on the 1945–1946 expedition sponsored by the Canadian National Institute for the Blind. As the Regional Director of Family Allowances for Yukon and the Northwest Territories, S.J. Bailey served as part of the Eastern Arctic Patrol beginning in the late 1940s.

CIRNAC has offices in ten (10) regions, at headquarters and to deal with oil and gas leases. The offices are further divided into the broad divisions of treaties and aboriginal government; lands and economic development and education and social development. Northern Development is represented in only the Northwest Territories (NWT) and Nunavut (NU) regional offices and headquarters.

The Nunavut Land Claims Agreement was implemented in 1993 between the Inuit of the Nunavut Settlement Area and the Government of Canada subject to the Constitution Act of 1982. The territory of Nunavut was formed in 1999. INAC has major responsibilities for managing the lands and resources of Nunavut.

With respect to the Inuit of Nunavut, the department and its Minister have the challenge of implementing the Conciliator's Final Report, dated March 1, 2006 on the Nunavut Land Claims Agreement Implementation Contract Negotiations for the Second Planning Period 2003-2013 "The Nunavut Project" authored by Thomas Berger.[16] This report recommends an increase in Inuit participation in Nunavut's federal and territorial public service.