Aberdeen South is a burgh constituency of the House of Commons of the Parliament of the United Kingdom and it elects one Member of Parliament (MP) by the first-past-the-post system of election.

From 1832 to 1885 there was a single Aberdeen constituency. Prior to 1832, the burgh of Aberdeen had been represented as a component of the Aberdeen Burghs constituency.

When Aberdeen South was created by the Redistribution of Seats Act 1885 and first used in the 1885 general election, so was Aberdeen North. Aberdeen South then consisted of the municipal wards of St Nicholas, Rosemount, Rubislaw and Ferryhill, and the 9th Parliamentary Polling District.[3] The rest of the county of Aberdeen was covered by the county constituencies of Eastern Aberdeenshire and Western Aberdeenshire.[4]

For the 1950 general election boundaries were redefined again, by the House of Commons (Redistribution of Seats) Act 1949. A new list of wards defined Aberdeen South – Ferryhill, Holburn, Rosemount, Rubislaw, Ruthrieston and Torry[4] – but the City of Aberdeen remained a two-constituency city, divided between Aberdeen South and Aberdeen North, with both constituencies entirely within the city.

The county of Aberdeen was then again divided between East Aberdeenshire and West Aberdeenshire, with both of these constituencies entirely within the county.[citation needed]

The same boundaries were used for the 1951 general election.

The 1979 general election was held before a review of constituency boundaries took account of new local government boundaries.

In 1996, under the Local Government etc (Scotland) Act 1994, local government regions and districts were abolished and the city became one of 32 unitary council areas of Scotland. Also, the name of the city became, officially, Aberdeen City.

The same boundaries were used for the 2001 general election.

The Aberdeen South constituency is an affluent suburban constituency located along the south of the Aberdeen City Council area. The seat covers most of Aberdeen's affluent West End and the outer suburbs of Bieldside, Cults, Milltimber and Peterculter. Situated within the constituency are some of Scotland's most affluent neighbourhoods, including Broomhill, Rubislaw and Queen's Cross, which was named the wealthiest part of Scotland in 2003.[6][7] The seat also extends south-east across the River Dee to cover the suburb of Cove Bay and the more deprived neighbourhoods of Torry and Kincorth.

Chart of Aberdeen South elections since the 1970 general election.

Ross Thomson of the Conservatives went on to gain the seat at the 2017 snap general election with a majority of 4,752 votes (10.6%) ahead of the sitting SNP MP Callum McCaig. 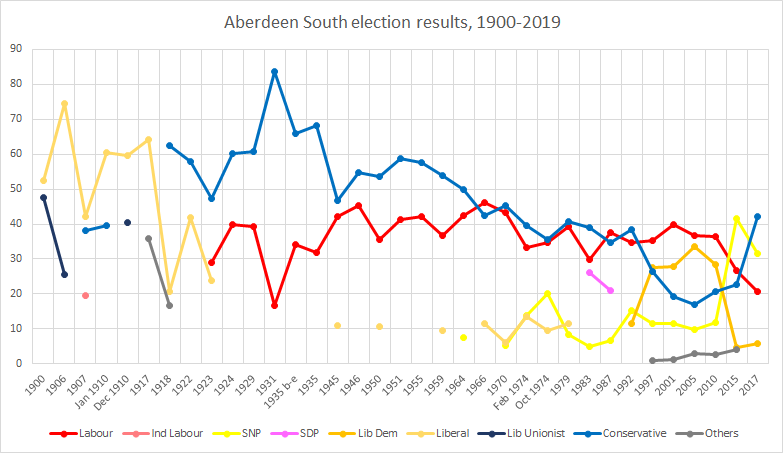