An abbreviation (from Latin brevis, meaning short [1]) is a shortened form of a word or phrase, by any method. It may consist of a group of letters, or words taken from the full version of the word or phrase; for example, the word abbreviation can itself be represented by the abbreviation abbr., abbrv., or abbrev.; NBM, for nil (or nothing) by mouth is an abbreviated medical instruction. It may also consist of initials only, a mixture of initials and words, or words or letters representing words in another language (for example, e.g., i.e. or RSVP). Some types of abbreviations are acronyms (which are pronounceable), initialisms (using initials only), or grammatical contractions or crasis.

An abbreviation is a shortening by any of these, or other, methods.

Acronyms, initialisms, contractions and crasis share some semantic and phonetic functions, and all four are connected by the term "abbreviation" in loose parlance.[2]:p167

A contraction is a reduction of size by the drawing together of the parts; a contraction of a word or words is made by omitting certain letters or syllables and bringing together the first and last letters or elements, such as "I'm" . A contraction may be regarded as a type of abbreviation, but not vice versa.

Abbreviations have a long history, created so that spelling out a whole word could be avoided. This might be done to save time and space, and also to provide secrecy. In both Greece and Rome the reduction of words to single letters was common.[3] In Roman inscriptions, "Words were commonly abbreviated by using the initial letter or letters of words, and most inscriptions have at least one abbreviation". However, "some could have more than one meaning, depending on their context. (For example, ⟨A⟩ can be an abbreviation for many words, such as ager, amicus, annus, as, Aulus, Aurelius, aurum and avus.)"[4]

Abbreviations in English were frequently used from its earliest days. Manuscripts of copies of the old English poem Beowulf used many abbreviations, for example the Tironian et (⁊) or & for and, and y for since, so that "not much space is wasted".[5] The standardisation of English in the 15th through 17th centuries included such a growth in the use of abbreviations.[6] At first, abbreviations were sometimes represented with various suspension signs, not only periods. For example, sequences like ‹er› were replaced with ‹ɔ›, as in ‹mastɔ› for master and ‹exacɔbate› for exacerbate. While this may seem trivial, it was symptomatic of an attempt by people manually reproducing academic texts to reduce the copy time.

In the Early Modern English period, between the 15th and 17th centuries, the thorn (letter) Þ was used for th, as in Þe ('the'). However, in modern times, ⟨Þ⟩ was often misread and wrongly rewritten as ⟨y⟩, as in Ye Olde Tea Shoppe.[7]

During the growth of philological linguistic theory in academic Britain, abbreviating became very fashionable. For example J. R. R. Tolkien, his friend C. S. Lewis and other members of the Oxford literary group were known as the Inklings.[8][clarification needed] Likewise, a century earlier in Boston, a fad of abbreviation started that swept the United States, with the globally popular term OK generally credited as a remnant of its influence.[9][10]

Over the years, however, the lack of convention in some style guides has made it difficult to determine which two-word abbreviations should be abbreviated with periods and which should not. This question is considered below,

Widespread use of electronic communication through mobile phones and the Internet during the 1990s allowed for a marked rise in colloquial abbreviation. This was due largely to increasing popularity of textual communication services such as instant- and text messaging. The original SMS, supported message lengths of 160 characters at most (using the GSM 03.38 character set), for instance.[a] This brevity gave rise to an informal abbreviation scheme sometimes called Textese, with which 10% or more of the words in a typical SMS message are abbreviated.[11] More recently Twitter, a popular social networking service, began driving abbreviation use with 140 character message limits.

In modern English, there are several conventions for abbreviations, and the choice may be confusing. The only rule universally accepted is that one should be consistent, and to make this easier, publishers express their preferences in a style guide. Questions which arise include those in the following subsections.

If the original word was capitalized then the first letter of its abbreviation should retain the capital, for example Lev. for Leviticus. When a word is abbreviated to more than a single letter and was originally spelled with lower case letters then there is no need for capitalization. However, when abbreviating a phrase where only the first letter of each word is taken, then all letters should be capitalized, as in YTD for year-to-date, PCB for printed circuit board and FYI for for your information. However, see the following section regarding abbreviations that have become common vocabulary: these are no longer written with capital letters. 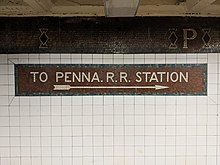 Sign in New York City subway, reading “Penna.” for Pennsylvania, showing American style of including the period even for contractions.

A period (full stop) is often used to signify an abbreviation, but opinion is divided as to when and if this should happen.

According to Hart's Rules, the traditional rule is that abbreviations (in the narrow sense that includes only words with the ending, and not the middle, dropped) terminate with a full stop, whereas contractions (in the sense of words missing a middle part) do not, but there are exceptions.[2]:p167–170 Fowler's Modern English Usage says full stops are used to mark both abbreviations and contractions, but recommends against this practice: advising them only for abbreviations and lower-case initialisms and not for upper-case initialisms and contractions.[12]

In American English, the period is usually included regardless of whether or not it is a contraction, e.g. Dr. or Mrs.. In some cases, periods are optional, as in either US or U.S. for United States, EU or E.U. for European Union, and UN or U.N. for United Nations. There are some house styles, however—American ones included—that remove the periods from almost all abbreviations. For example:

Acronyms that were originally capitalized (with or without periods) but have since entered the vocabulary as generic words are no longer written with capital letters nor with any periods. Examples are sonar, radar, lidar, laser, snafu, and scuba.

Today, spaces are generally not used between single-letter abbreviations of words in the same phrase, so one almost never encounters "U. S."

When an abbreviation appears at the end of a sentence, only one period is used: The capital of the United States is Washington, D.C.

There is a question about how to pluralize abbreviations, particularly acronyms. Some writers tend to pluralize abbreviations by adding 's (apostrophe s), as in "two PC's have broken screens", although this notation typically indicates possessive case. However, this style is not preferred by many style guides. For instance, Kate Turabian, writing about style in academic writings,[13] allows for an apostrophe to form plural acronyms "only when an abbreviation contains internal periods or both capital and lowercase letters". Turabian would therefore prefer "DVDs" and "URLs" and "Ph.D.'s", while the Modern Language Association[14] explicitly says, "do not use an apostrophe to form the plural of an abbreviation". Also, the American Psychological Association specifically says,[15][16] "without an apostrophe".

However, the 1999 style guide for The New York Times states that the addition of an apostrophe is necessary when pluralizing all abbreviations, preferring "PC's, TV's and VCR's".[17]

Following those who would generally omit the apostrophe, to form the plural of run batted in, simply add an s to the end of RBI.[18]

For all other rules, see below:

To form the plural of an abbreviation, a number, or a capital letter used as a noun, simply add a lowercase s to the end. Apostrophes following decades and single letters are also common.

To indicate the plural of the abbreviation or symbol of a unit of measure, the same form is used as in the singular.

When an abbreviation contains more than one full point, Hart's Rules recommends putting the s after the final one.

However, subject to any house style or consistency requirement, the same plurals may be rendered less formally as:

According to Hart's Rules, an apostrophe may be used in rare cases where clarity calls for it, for example when letters or symbols are referred to as objects.

However, the apostrophe can be dispensed with if the items are set in italics or quotes:

In Latin, and continuing to the derivative forms in European languages as well as English, single-letter abbreviations had the plural being a doubling of the letter for note-taking. Most of these deal with writing and publishing. A few longer abbreviations use this as well.

Conventions followed by publications and newspapers

Many British publications follow some of these guidelines in abbreviation:

Writers often use shorthand to denote units of measure. Such shorthand can be an abbreviation, such as "in" for "inch" or can be a symbol such as "km" for "kilometre/kilometer".

In the International System of Units (SI) manual[20] the word "symbol" is used consistently to define the shorthand used to represent the various SI units of measure. The manual also defines the way in which units should be written, the principal rules being:

New York City has various neighborhoods named by syllabic abbreviation, such as Tribeca (Triangle below Canal Street) and SoHo (South of Houston Street). This usage has spread into other American cities, giving SoMa, San Francisco (South of Market) and LoDo, Denver (Lower Downtown), amongst others.

Partially syllabic abbreviations are preferred by the US Navy, as it increases readability amidst the large number of initialisms that would otherwise have to fit into the same acronyms. Hence DESRON 6 is used (in the full capital form) to mean "Destroyer Squadron 6", while COMNAVAIRLANT would be "Commander, Naval Air Force (in the) Atlantic."

Languages other than English

Syllabic abbreviations prevailed in Nazi Germany and the Soviet Union for naming a plethora of new bureaucratic organisations. For example, Gestapo stands for Geheime Staats-Polizei, or "secret state police". Similarly, Leninist organisations such as the Comintern (Communist International) and Komsomol (Kommunisticheskii Soyuz Molodyozhi, or "Communist youth union") used Russian language syllabic abbreviations. This has given syllabic abbreviations negative connotations in some countries,[citation needed] (as in Orwell's Newspeak), notwithstanding that such abbreviations were used in Germany even before the Nazis came to power, e.g., Schupo for Schutzpolizei, and are still used, e.g. Kripo for Kriminalpolizei.

In Belarus there is Beltelecom (Belarus Telecommunication) and Belsat (Belarus Satellite).

Syllabic abbreviations were also typical for the German language used in the German Democratic Republic, e.g. Stasi for Staatssicherheit ("state security", the secret police) or Vopo for Volkspolizist ("people's policeman"). Other uses are in company or product names such as Aldi, from the name of the founder, Theo Albrecht, and the German word Diskont (discount) or Haribo, from the name of the founder and the headquarters of the company, Hans Riegl Bonn.

East Asian languages whose writing systems use Chinese characters form abbreviations similarly by using key Chinese characters from a term or phrase. For example, in Japanese the term for the United Nations, kokusai rengō (国際連合) is often abbreviated to kokuren (国連). (Such abbreviations are called ryakugo (略語) in Japanese; see also Japanese abbreviated and contracted words). The syllabic abbreviation is frequently used for universities: for instance, Tōdai (東大) for Tōkyō daigaku (東京大学, University of Tokyo) and is used similarly in Chinese: Běidà (北大) for Běijīng Dàxué (北京大学, Peking University). The English phrase "Gung ho" originated as a Chinese abbreviation.