Enlarge ISBN (identifier) Dorset (unitary authority)
This article is about the village in England. For the suburb in Sydney, Australia, see Abbotsbury, New South Wales.
Human settlement in England

Abbotsbury is a village and civil parish in the English county of Dorset. It is in the Dorset unitary authority area and is situated about 1 mile (1.6 km) inland from the English Channel coast. In the 2011 census the civil parish had a population of 481.

The coastline within Abbotsbury parish includes a section of Chesil Beach, an 18-mile (29 km) barrier beach which is part of the Jurassic Coast, a World Heritage Site.

Abbotsbury is known for its swannery, subtropical gardens and surviving abbey buildings, including St Catherine's Chapel, a 14th-century pilgrimage chapel that stands on a hill between the village and the coast.

Much of Abbotsbury, including Chesil Beach, the swannery and subtropical gardens, is owned by the Ilchester Estate, which owns 61 square kilometres (15,000 acres) of land in Dorset.

The village of Abbotsbury comprises a long street of stone houses,[2] many of which are thatched, with some dating from the 16th century.[3][4] The street broadens at one point into an old market square.[3] Parts of the street have a raised pavement.[5] The village is surrounded by hills on all sides, except to the east; in 1905 Sir Frederick Treves described Abbotsbury as being "very pleasantly situated among the downs".[4] Dorset-born broadcaster and writer Ralph Wightman described the village as "possibly the most interesting in Dorset".[2]

The B3157 road between Abbotsbury and Burton Bradstock is notable for its fine coastal views.[6] 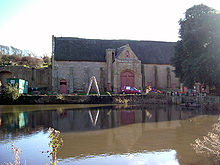 One and a half miles (2.4 km) northwest of the village, at the top of Wears Hill, are the earthworks of Abbotsbury Castle, an Iron Age hill fort.[7] The earthworks cover a roughly triangular area of about 10 acres (4.0 ha), of which about 4.5 acres (1.8 ha) are inside the ramparts.[8]

In the 10th century a charter of King Edmund records a granting of land at Abbedesburi,[9] a name which indicates the land may have once belonged to an abbot.[9] In the 11th century King Cnut granted land at nearby Portesham to the Scandinavian thegn Orc (also Urki, Urk), who took up residence in the area with his wife Tola.[10] The couple founded Abbotsbury Abbey and enriched it with a substantial amount of land.[10]

In 1086, in the Domesday Book Abbotsbury was recorded as Abedesberie or Abodesberie;[11] it had 62 households, 16 ploughlands, 32 acres (13 ha) of meadow and 2 mills. It was in the hundred of Uggescombe and the lords and tenants-in-chief were Abbotsbury Abbey and Hawise, wife of Hugh son of Grip.[12]

Abbotsbury Abbey existed for 500 years, but was destroyed in the dissolution, although the abbey barn survived. Stone from the abbey was used in the construction of many buildings in the village,[2] including the house of Abbotsbury's new owner, Sir Giles Strangways.[6] 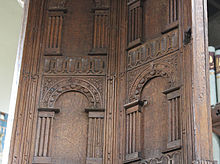 In 1664, during the English Civil War, Roundheads (Parliamentarians) and Cavaliers (Royalists) clashed at Abbotsbury. Parliamentarians besieged the Royalists in the church of St. Nicholas;[13] two bullet holes from the fight remain in the Jacobean pulpit.[6] The Strangways house which had replaced the Abbey after the dissolution was also the scene of a skirmish, as the Royalist Colonel Strangways resisted the Parliamentarians, who besieged the house and burned it. The house gunpowder store exploded in the fire and the house was destroyed,[6] together with the old abbey records which had been stored there.[14]

In the late 17th, and early 18th centuries Abbotsbury experienced several fires, resulting in the destruction of virtually all its medieval buildings. Most of the historic secular buildings in the village today were built from stone in the 17th and 18th centuries.[15]

County historian John Hutchins (1698–1773) recorded that fishing was the main industry in the village, and 18th-century militia ballot lists reveal that husbandry was also particularly important. Ropemaking, basketry and the manufacture of cotton stockings were other notable trades within the village, with records indicating hemp and withies being grown in the area.[15]

Between 1885 and 1952, Abbotsbury was served by the Abbotsbury Railway, a 6 miles (9.7 km) branch from the main line to Weymouth. It was primarily designed for freight, in anticipation of the development of oil shale deposits and stone at Portesham, as well as iron ore at Abbotsbury which would be shipped to South Wales for processing. The Abbotsbury terminus of the line was inconveniently sited 1 mile (1.6 km) east of the village because the railway could not buy the land needed to build the station closer to the village.[16][self-published source]

During the Second World War, the coastal front was fortified and defended as a part of British anti-invasion preparations of World War II.[17][18][self-published source] Later, The Fleet Lagoon was used as a machine gun training range, and bouncing bombs were tested there, for Operation Chastise (the "Dambuster" sortie).

In the United Kingdom national parliament, Abbotsbury is in the West Dorset parliamentary constituency, which is currently represented by Oliver Letwin of the Conservative Party. In local government, Abbotsbury is governed by Dorset unitary authority at the highest tier, and Chesil Bank Group Parish Council (which also governs the parishes of Portesham, Fleet and Langton Herring) at the lowest tier.[19]

In national parliament and local council elections, Dorset is divided into several electoral wards, with Abbotsbury being within Chickerell and Chesil Bank ward.[20][21][22] In county council elections, Abbotsbury is in the Chickerell and Chesil Bank electoral division, one of 42 divisions that elect councillors to Dorset County Council. It includes the parishes of Abbotsbury, Chickerell, Fleet, Kingston Russell, Langton Herring, Littlebredy, Long Bredy, Portesham, Winterbourne Abbas and Winterbourne Steepleton. Dorset County Council estimate that in 2011 the division had a population of 7,900.[23] 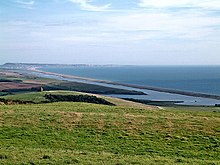 Chesil Beach and The Fleet from the northwest, with St Catherine's Chapel on the left

Abbotsbury village is in the Dorset unitary authority administrative area, situated amidst hills about 1 mile (1.6 km) inland from the English Channel coast at Chesil Beach, an 18-mile (29 km) barrier beach which south of the village encloses The Fleet, a brackish coastal lagoon. Measured directly, the village is about 7 miles (11 km) northwest of Weymouth and 8 miles (13 km) southeast of Bridport.[24] Abbotsbury is connected to those towns by the B3157, which is the main road running through the village. Abbotsbury is located 6 miles (9.7 km) from Upwey railway station and 35 miles (56 km) from Bournemouth International Airport. The coastline within Abbotsbury civil parish is part of the Jurassic Coast, a World Heritage Site.[25] All of Abbotsbury parish is within the Dorset Area of Outstanding Natural Beauty.[26]

The population of the civil parish in the censuses between 1921 and 2001 is shown in the table below: 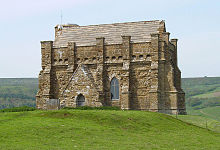 To the south of the village, on a bare hill about 80 metres (260 ft) high, stands St Catherine's Chapel, a small 14th-century pilgrimage chapel used by the monks of the abbey as a place for private prayer.[32] It is built entirely of stone, including the roof and even the panelled ceiling.[6] The walls are 1.2 metres (3.9 feet) thick and buttressed. The chapel overlooks the English Channel, and may have served as a beacon for sailors, warning of the nearby Isle of Portland. The chapel is listed as Grade I.[33]

The Parish Church of St Nicholas dates from the 14th century but has had various revisions over the centuries. The tower contains three bells dating from 1773 and made by Thomas Castleman Bilbie of the Bilbie family in Cullompton.[34][self-published source] The chancel was classicised in the 18th century and still has its plastered barrel roof and fine altarpiece. There are also some 15th-century painted glass, a stone effigy of one of the abbots and a Jacobean canopied pulpit.[35] The church is listed as Grade I.[36]

Abbotsbury Abbey tithe barn was built around 1400. It measures 83 by 9.5 metres (272 by 31 ft) and is the world's largest thatched tithe barn.[8][37] It has 23 bays, 11 of which have been unroofed since the 17th century. The 12 roofed bays are covered with thatch, though previously stone slabs were used. Part of the north wall has been destroyed. The barn is listed as Grade I.[38]

An estate of some 61 square kilometres (15,000 acres) in Dorset covering Chesil Beach and Abbotsbury is held by the Ilchester Estate, owned by Mrs Charlotte Townshend, the daughter of Viscount Galway, a descendant of the first Countess of Ilchester and owner of the Melbury Estate. 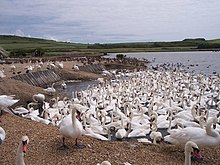 Mute swans on the Fleet lagoon at Abbotsbury Swannery

Situated south of the village on the shore of the Fleet lagoon, Abbotsbury Swannery is over 600 years old, having previously been owned by the abbot and managed, using decoys, to provide meat for the abbey. When the abbey was destroyed the swannery passed to the earls of Ilchester,[2] and today the decoys are used for monitoring and recording purposes.[6] The swannery has a large colony of mute swans, as well as other waterfowl, and is open to the public. The site is an important nesting and breeding ground for the swans and, from May through the summer, cygnets can be seen at close quarters.

Abbotsbury Subtropical Gardens were founded in 1765 by the Countess of Ilchester, as a kitchen garden for the nearby castle.[39] Since then, the gardens have developed into a 20-acre (81,000 m²) site filled with exotic plants, many of which were newly discovered species when they were first introduced. There are formal and informal gardens, with woodland walks and walled gardens. In 1990 violent storms damaged many of the rare specimens, which have since been replaced by younger plants.[40] 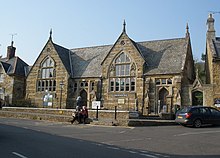 Abbotsbury has a village hall, called the Strangways Village Hall; it is run by the Strangways Hall Committee and is a registered charity and available for hire.[41] The village has two public houses, The Ilchester Arms[42] and The Swan Inn, and several tearooms, small shops and businesses. The village also has a cricket ground.[43]