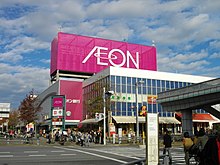 ÆON is the largest retailer in Asia.[2] ÆON is a retail network comprising around 300 consolidated subsidiaries and 26 equity-method affiliated companies ranging from convenience stores "Ministop" and supermarkets to shopping malls and specialty stores, including Talbots. ÆON is Japan's single-largest shopping mall developer and operator.

The name ÆON is a transliteration from the koine Greek word ὁ αἰών (ho aion), from the archaic αἰϝών (aiwon). The name and symbolism used in the branding implies the eternal nature of the company.[3]

As of March 1, 2011, all JUSCO and Saty stores under the ÆON umbrella in Japan officially changed their names to ÆON while all the JUSCO stores and shopping centres in Malaysia are fully re-branded into ÆON since March 2012. However, JUSCO stores still operate in the Greater China region and some others.

In November 2012, ÆON acquired the operation of Carrefour Malaysia with an enterprise value of €250 million.[4] All of the current Carrefour hypermarkets and supermarkets in Malaysia will be fully re-branded into "ÆON Big" in the near future. The acquisition of Carrefour Malaysia will make ÆON as the second largest retailer in the nation, combining the sales from ÆON Retail stores (formerly known as JUSCO) and current Carrefour outlets.[5] Post-acquisition, ÆON's ASEAN business vice president said the retail giant envisages to open 100 outlets in various formats in the country by year 2020.[6]