The Ağrı Province (Turkish: Ağrı ili, Kurdish: Parêzgeha Agiriyê‎[2]) is a province in eastern Turkey, bordering Iran to the east, Kars to the north, Erzurum to the northwest, Muş and Bitlis to the southwest, Van to the south, and Iğdır to the northeast. In Turkish Kurdistan, it has an area of 11,376 km² and a population of 542,022 (2010 est). A majority of the province's population are Kurds.[3] The region also has a sizeable Qarapapaq minority.[4][5][6] 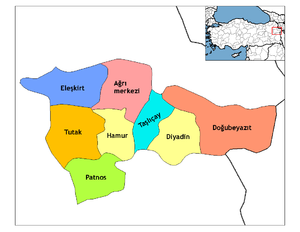 Ağrı is named after the nearby Mount Ararat, a 5,137 metres (16,854 ft) high stratovolcano, the highest mountain in Turkey and a national symbol to Armenians (see Western Armenia). It can be climbed from here and can be seen from parts of Azerbaijan, Iran, Georgia, and Armenia. The nearest town to the mountain is Doğubayazıt.

46% of the province is mountainous, 29% is plain, 18% is plateau, and 7% high meadow. As well as Ararat there are many other peaks over 3,000m, including Aladağlar and Tendürek. The plains are fertile, being covered in volcanic deposits, and are used for growing grains and grazing. Various tributaries of the Murat River (which later feeds the Euphrates) flow through the area and water these plains. The high meadows are used for grazing.

The weather here is very cold (temperatures as low as -10 °C (14 °F) in winter) and the mountainsides are mainly bare. There are a number of important passes and routes through the mountains.

The plateau of Ağrı was controlled by the Kingdom of Urartu until its transition to the Kingdom of Armenia. The area was coveted by many as a gateway between east and west. It was conquered numerous times by Assyrians, Greeks, Romans, Byzantines, Arabs, Georgians, Mongols, Persians, and finally by the Seljuq and Ottoman Turks.

The first Muslims in the area were the Abbasids in 872. The Turkish tribes began to pass through in huge numbers following the defeat of the Byzantine armies at Malazgirt in 1071, sometimes pursued by Mongols. The land was brought into the Ottoman Empire by Sultan Selim I following the Battle of Chaldiran. The region was part of the Erzurum Vilayet during the Ottoman Empire.

In the late 1920s, in an attempt to curb the Ararat rebellion,[9][10], the province was included into the First Inspectorate-General (Turkish: Birinci Umumi Müfettişlik)[11] comprising the provinces of Mardin, Diyarbakır, Van, Elazıĝ, Bitlis, Hakkari, Şanlıurfa and Siirt.[12]

On August 19, 2006, the Tabriz–Ankara gas pipeline exploded in the province. Turkish authorities suspect Kurdish rebels were behind the incident.[16]

The economy is mainly agricultural. People also live by breeding animals. Ağrı attracts tourists to the mountains, for climbing and trekking in summers, and skiing in winters. Places of interest include:

A majority of its population, approximately 315,000 people, live in urban areas (59%) up from only 53,000 people in 1965 (22% of its population). That means a sixfold increase of the urban population. The urbanization rate is still increasing. However, Ağrı remains predominantly agricultural because a large minority lives in rural areas and works in agriculture. The rural population grew from 193,000 in 1965 to 221,000 in 2017. Three districts with the largest populations have urban majorities, while the other five districts with the smallest populations, have rural majorities.[citation needed]