Activated at Camp Adair, Oregon, in 1943, the 70th Division served throughout World War II in the European Theater of Operations, the division was deactivated in October 1945 at Camp Kilmer, New Jersey following its return to the United States.

The name "Trailblazers" originated from the pioneers moving west into Oregon and "blazing" trails through the thick evergreen forests of the Pacific Northwest. The 70th Infantry Division adopted the "Trailblazer" title when they were activated in 1943. They became known as the Trailblazer Division.

Memorial for fallen soldiers of the 70th at Spicheren Heights, near Stiring-Wendel

The three infantry regiments of the 70th Infantry Division, the 274th, 275th and 276th, landed at Marseille, France, 10–15 December 1944, and were formed into Task Force Herren under command of deputy division commander, Thomas W. Herren, before the arrival of the remainder of the division on 18 January 1945. Task Force Herren took over defensive positions along the west bank of the Rhine, 28 December 1944, in the vicinity of Bischwiller, south of Haguenau Forest. Elements took part in the fight to stop the German Operation Nordwind, and struck at the enemy at Philippsbourg and at Wingen between Bitche and Hagenau. In mid-January 1945, the task force moved to an area directly south of Saarbrücken, where it carried out reconnaissance and combat patrols, and improved its defensive positions. Upon the arrival of the remainder of the division, Task Force Herren was dissolved.

The division continued patrolling and combat raids as it made preparations for an offensive drive in mid-February. On 17 February 1945, the division attacked just below the Saar River. The 70th drove onto high ground overlooking Saarbrücken, smashed into Forbach, took Stiring-Wendel, and continued across the Saar to take Saarbrücken, 20 March 1945. Pushing through Siegfried Line defenses along the north bank of the Saar, the division took Völklingen and other Saarland cities and towns. On March 31 it was reassigned to the Third Army. In April it took part in the reduction of the Saar Basin, and after VE-day was engaged in occupational duties, with command posts at Otterberg, Bad Kreuznach, Frankfurt, and Oranienstein in Germany. 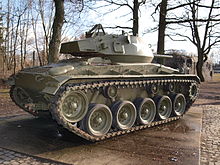 M24, donated by veterans of the 70th, facing ruins of fortifications at Spicheren Heights

In 1952 it was allotted to the Organized Reserve Corps, now known as the Army Reserve. Later the same year the 70th was redesignated as the 70th Division (Training). It remained in Detroit until 1968, when it was moved to Livonia, Mich. The 70th Division (Training) was formally inactivated in Michigan on Nov. 15, 1996. The very next day, the 70th Regional Support Command was activated at Fort Lawton, Wash., bringing the name of the 70th back to the Northwest

In 1979 the command was redesignated as the 70th Regiment (Infantry One Station Unit Training), 70th Division (Training). During Desert Storm in 1991 the 70th took over Infantry School operations at Fort Benning, Georgia. The command was formally inactivated in Michigan on Nov. 15, 1996 and the 124th Army Reserve Command (ARCOM) adopted the division title and history the next day. In 2000 the 70th Regional Support Command became the 70th Regional Readiness Command and began developing a history and relationship with the 70th ID soldiers and association.

Based upon the 2005 BRAC recommendations, Fort Lawton was closed and the 70th Regional Support Command deactivated in 2009.