6th of October (Arabic: السادس من أكتوبر‎ Al Sādis Min Uktōber; Egyptian Arabic: ستة اكتوبر‎ Setta Oktōbar) is a city in Giza Governorate, a satellite town and part of the urban area of Cairo, Egypt, 32 km (20 miles) outside the city.[1] It has a population ranging between some 185,000 in the city to an estimated 500,000 inhabitants in the wider area.[2]

6th of October was the capital of the now defunct 6th of October Governorate. A new city in the desert,[3] it hosts Egyptian students and students from various countries, such as the Persian Gulf, Jordan, Nigeria, Cameroon, Syria, Iraq, and the Palestinian territories, who study at its private universities.

The settlement was established in 1979 by the 504th presidential decree of Egyptian President Anwar El Sadat. It is 17 km (11 mi) from the great pyramids of Giza and 32 km (20 mi) from downtown Cairo. The city has a total area of 482 km2 (119,200 acres) and, eventually, is expected to have 6 million inhabitants, although there are many unoccupied or incomplete buildings.[4]

It was announced as the capital of the 6th of October Governorate in April 2008. Following the governorate's dissolution in April 2011, in the wake of the Egyptian revolution, it was reincorporated into the Giza Governorate, to which it had originally belonged.

The city's name commemorates the commencement of the 1973 Arab–Israeli War on 6 October 1973, the same date chosen as Egypt's Armed Forces Day.

Köppen-Geiger climate classification system classifies its climate as hot desert (BWh). Its climate is very similar to Giza and Cairo, owing to its proximity to them

6th of October is the headquarters of the Confederation of African Football. It hosts Egypt's Smart Village, the technology park and regional hub for many companies in the IT and financial sectors.[citation needed]

6th of October City has one of the largest industrial zones in Egypt on which the entire city is established. The industrial zone provides jobs for employees within the city as well as from other parts of Giza. It is accompanied by a banking sector that groups branches of all banks in Egypt in an area that is close to the industrial area to serve the needs of the industry and residents.

Some of the largest businesses in 6th of October City are mentioned below:

6th of October Airport is used for the transport of products and materials to and from the city. The city also houses four industrial zones.

Center for Documentation of Cultural and Natural Heritage

There are seven private universities in 6th of October City, including two private medical schools at Misr University for Science and Technology and October 6 University.

The city has several teaching, public, and private hospitals as well as many smaller clinics. 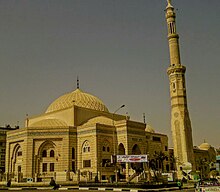 The city is served by many mosques, the largest being El Hosary Mosque on El Tahrir St. built in the honour of an eminent Egyptian Qari, Mahmoud Khalil Al-Hussary.

There are several churches in 6th of October city. The most famous of them is Redeem Christian Church of God(RCCG). 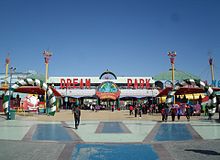 The city has a wide variety of entertainment and leisure activities for families and individuals.

There are four mega malls, as well as many small malls and centers with an average of three for each city.

6th of October has 10 cinema complexes

There are nine sporting clubs.

The city has two paintball fields (Adrenaline Paintball and KEE Action Park). There is one amusement park: Dream Park. Camp X-treme is a team building venue, family picnic park and camping facility for kids and adults.