Starting at the Prime Meridian and heading eastwards, the parallel 45° north passes through: 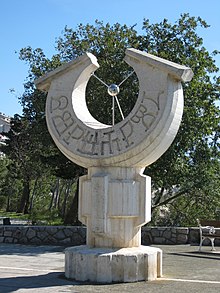 Sundial at the 45th parallel in Senj, Croatia.

In Europe the 45th parallel hits the Bay of Biscay coast of France in the west. It crosses the river Rhône at Pont-de-l'Isère, just north of Valence, Drôme and through Grenoble. It then continues across the Massif Central and into the Aquitaine region. The city of Bordeaux is just south of the parallel.

In northern Italy it parallels the river Po, near Rovigo, passing by Voghera, then just south of Turin before passing into France in the Cottian Alps.

Further east it passes through the Balkans: Romania (just north of Ploieşti, and through Târgu Jiu), the Serbian autonomous province of Vojvodina, the eastern tip of Croatia, the northern edge of Bosnia and Herzegovina, and a section of Adriatic Croatia. The capital city of Serbia – Belgrade is just south of the parallel.

After leaving Russia the parallel passes through southern Kazakhstan, skirting the northern edge of the Ustyurt Plateau. It intersects the city of Burylbaytal at the southern tip of Lake Balkhash and the city of Qyzylorda further west. At the border with Uzbekistan it bisects the Aral Sea and its toxic Vozrozhdeniya Island peninsula, site of an abandoned Soviet bioweapons laboratory.

In northwest China it passes through the Ili Kazakh Autonomous Prefecture in Xinjiang and the oil city of Karamay. Transecting southern Mongolia it passes through the provinces of Sükhbaatar, Dornogovi (and its capital Sainshand), Dundgovi, Övörkhangai, Bayankhongor, Govi-Altai, and Khovd. At Khanka Lake it enters northeast China, cutting across Heilongjiang and continuing through part of Jilin and eastern Inner Mongolia.

It leaves the Asian mainland on the coast of Primorsky Krai in Russia, north of Vladivostok and continues through the northern part of the Sea of Japan. It passes through Rishiri-Rebun-Sarobetsu National Park and the adjacent town of Horonobe on the northern tip of Hokkaidō, the northernmost of Japan's main islands, before heading east across the North Pacific Ocean. 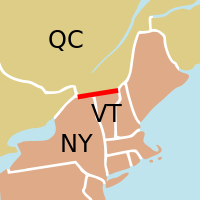 The 45th parallel approximately defines part of the international border between Quebec, Canada, and New York and Vermont, United States.

The 45th parallel approximately defines most of the border between Montana and Wyoming in the United States.

Throughout the United States the parallel is marked in many places on highways by a sign proclaiming that the location is halfway between the North Pole and the equator.[3][4][N 1]

Going from west to east, the line makes landfall at the Pacific coast in Oregon. After crossing Idaho and the Rocky Mountains, it makes up most of the boundary between Montana and Wyoming. It then passes through the Great Plains and further east roughly bisects the metropolitan area of Minneapolis-St. Paul.

In Michigan, the Old Mission Peninsula in Grand Traverse Bay ends just shy of the 45th parallel. Many guidebooks and signs at the Mission Point Lighthouse describe it as being halfway between the equator and north pole. When the Grand Traverse Bay recedes below normal level, it is possible to walk out to the exact line.

Further east, the 45th parallel roughly marks the Canada–United States border between the St. Lawrence and Connecticut rivers, between the Canadian province of Quebec and the states of New York and Vermont. The parallel is sometimes called the "Canada line". After the Seven Years' War, the 45th parallel was declared the boundary between New York and Quebec. Under the Webster–Ashburton Treaty of 1842, original measurement errors stand so that the boundary is not exactly at 45 degrees north but is where the survey monuments were erected in 1772. The actual boundary of Vermont lies approximately 1 kilometre (3,300 ft) north of the parallel due to an error in the 1772 survey.[5]