The 43rd G7 summit was held on 26–27 May 2017[1] in Taormina (ME), Sicily, Italy.[2] In March 2014, the G7 declared that a meaningful discussion was currently not possible with Russia in the context of the G8. Since then, meetings have continued within the G7 process.

The choice of Taormina as the headquarters of the G7 was announced by the then Prime Minister Matteo Renzi on 4 July 2016. The summit was initially scheduled to take place in Florence. Among the reasons for the change of choice, Renzi cited the words of an international leader at a previous summit that with a joke had highlighted his prejudice against Sicily pointing out as the land of the Mafia and claimed that those words had convinced him to fix the G7 in Sicily. 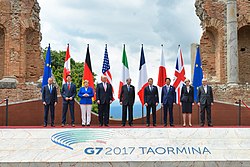 Official photo of the dinner with the President of Italy

Leaders posing after signing the Statement on the fight against terrorism and violent extremism. The document was signed just a few days after the Manchester Arena bombing

The attendees include the leaders of the seven G7 member states as well as representatives of the European Union. The President of the European Commission has been a permanently welcome participant at all meetings and decision-making since 1981.

The G7 leaders emphasized common endeavours: to end the Syrian crisis, to fulfill the UN mission in Libya and reducing the presence of ISIS, ISIL and Da'esh in Syria and Iraq. North Korea was urged to comply with UN resolutions, Russian responsibility was stressed for the Ukraine conflict. Supporting economic activity and ensuring price stability was demanded while inequalities in trade and gender were called to be challenged. It was agreed to help countries in creating conditions that address the drivers of migration: ending hunger, increasing competitiveness and advancing global health security.[3]