Schloss Elmau in the Bavarian Alps, location of the 2015 G7 summit

The 41st G7 summit was held in Schloss Elmau, Krün, Bavaria and Germany on June 7–8, 2015.[1] In March 2014 the remaining members of the G8 declared that a meaningful discussion was currently not possible with Russia, and since then meetings have continued under the G7 name (not to be confused with the G7 meetings of finance ministers and central bank governors).

The attendees included the leaders of the seven currently active G7 member states,[2] as well as representatives of the European Union. The President of the European Commission is a permanently welcome participant in all meetings and decision-making since 1981.

The 41st G7 summit was the last summit for Canadian Prime Minister Stephen Harper. It was also the first summit for Donald Tusk and Jean-Claude Juncker.

The leaders of the G7. 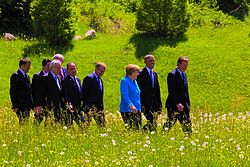 Key topics for the summit

The G7 Summit 2015 in Schloss Elmau will focus on the global economy as well as on key issues regarding foreign, security and development policy. Additionally the UN conferences to be held in 2015 as well as the post-2015 agenda will be discussed.

Other key issues they will be addressing include

In addition, they will continue the ongoing G7 process in regard to development policy.

A community of shared values

The G7 countries have a special responsibility when it comes to shaping our planet's future. As a community of shared values, the G7 must work towards establishing peace and security and ensuring people can live a self-determined life. Freedom and human rights, democracy and the rule of law, peace and security, prosperity and sustainable development are core principles agreed by the G7. "The heads of state and government of the G7 do not accept the Russian Federation’s illegal annexation of Crimea. As a community of values, they have therefore decided to hold their meetings without Russia until further notice."

The G7's commitment to pursue a common foreign and security policy is extremely important given the numerous political crises the world over. In March 2014 the G7 declared that a meaningful discussion was currently not possible with Russia in the context of the G8. Since then meetings have continued within the G7 process.

On 15 April 2015, the Foreign Ministers included in their final communiqué a considerable amount of international crises and common challenges the international community is currently facing.[4] Special attention was also paid to the issue of Climate and Security. The Ministers welcomed the external study "A New Climate for Peace: Taking Action on Climate and Fragility Risks",[5] which "analyses the compound risks of climate change on fragile states and regions, identifies critical pathways through which climate change is likely to have significant interactions with the stability and fragility of states and societies, and recommends that G7 governments should align their efforts toward the common goal of increasing resilience and reducing fragility in the face of global climate change."[4]

The G7 countries are key actors in international economic relations, and as such they carry great responsibility for creating reliable, sustainable and viable global economic conditions. Dynamic and sustainable growth in industrialised, newly industrialising and developing countries is easier to achieve if those countries are agreed on basic issues around economic development, cross-border trade and an effective, prudent financial market architecture. That is why the G7 will continue to work towards establishing an enabling environment that is stable in the long term in order to promote dynamic, sustainable economic growth. Sound finances, open global markets and a well-functioning labour market have a key role to play in that. The G7 states will together continue to promote international trade.

The leaders of the G7 intend to support African nations in their reform efforts and thus to lay the foundations for peace and security, growth and sustainable development on the African continent. That is why they will be inviting the heads of state and government primarily of African countries to join them on the second day of the summit. Together with them they will engage in a wide-ranging dialogue on Africa and global policy issues. The German Chancellor also plans to hold an inclusive dialogue with civil society in the context of Germany's G7 Presidency. As part of an outreach process Angela Merkel will meet representatives of the scientific community, business and trade unions, as well as non-governmental organisations and young people from the G7 countries. 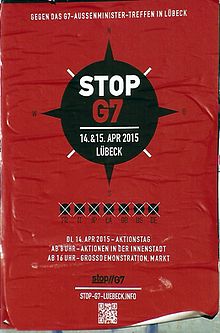 attempts to disrupt the meeting

The following meetings of ministers were planned in the run-up to the summit in Schloss Elmau:[3]