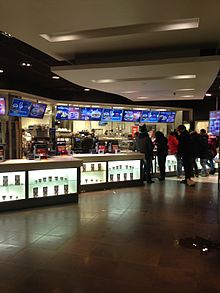 In commerce and industry, 24/7 or 24-7 service (usually pronounced "twenty-four seven") is service that is available at any time and usually, every day.[1] An alternate orthography for the numerical part includes 24×7 (usually pronounced "twenty-four by seven"). The numerals stand for "24 hours a day, 7 days a week". Less commonly used, 24/7/52 (adding "52 weeks") and 24/7/365 service (adding "365 days") make it clear that service is available every day of the year.

Synonyms include round-the-clock service (with/without hyphens), especially in British English,[2][3] and nonstop service, but the latter can also refer to other things, such as public transport services which go between two stations without stopping.

The Oxford English Dictionary (OED) defines the term as "twenty-four hours a day, seven days a week; constantly". It lists its first reference to 24/7 to be from a 1983 story in the US magazine Sports Illustrated in which Louisiana State University player Jerry Reynolds describes his jump shot in just such a way: 24-7-365.

24/7 service might be offered by a supermarket, convenience store, ATM, automated online assistant, filling station, restaurant, concierge services or a staffed datacenter, or a staffing company that specializes in providing nurses since often nurses cover shifts 24/7 at hospital which are open 24/7. 24/7 services may also include taxicabs, security services, and in densely populated urban areas, construction crews.

Public 24/7 services often include those provided by emergency medical providers, police, fire and emergency telephone numbers, such as 9-1-1 in North America.

Transport services like airports, airlines, and ferry services, and in some cases trains and buses, may provide 24-hour service. Examples of public transport services operating 24/7 include the New York City Subway, PATCO, the Copenhagen Metro, and two lines of the Chicago "L". Some public transportation services, including two lines of the SEPTA system, some lines of the London Underground, the Barcelona Metro, and the Istanbul Metro, only offer 24-hour service on Friday and Saturday nights.

Industrial and manufacturing facilities—especially those that operate near or at capacity, or which depend upon processes (such as production lines) that are costly to suspend—often provide 24/7 services. Similarly, utilities generally must provide multiple 24/7 services. For instance, an electricity provider will handle outage reports 24/7 and dispatch emergency repair technicians 24/7, in addition to monitoring electrical infrastructure and producing electricity at all times. The same applies to telecommunications and internet service providers.

Many 24/7 services operate continuously at all times with complete shift staff.

24/7 services that can utilize virtual offices, such as call centers, may employ daytime agents in alternating time zones.

In some cases, 24/7 services may be temporarily unavailable under certain circumstances. Such scenarios may include scheduled maintenance, upgrades or renovation, emergency repair, and injunction. 24/7 services which depend upon the physical presence of employees at a given location may also be interrupted when a minimum number of employees cannot be present due to scenarios such as extreme weather, death threats, natural disasters, or mandatory evacuation.

Some 24/7 services close during major holidays.

24/7 services often employ complex schemes that ensure their resistance to potential disruption, resilience in the event of disruption, and minimum standards of overall reliability.

Critical infrastructure may be supported by failover systems, electric generators, and satellite communications. In the event of catastrophic disaster, some 24/7 services prepare entirely redundant, parallel infrastructures, often in other geographic regions.

24/7 workplaces can put employees under conditions that limit their personal life choices and development. Calls for a rehumanisation of the 24/7 workplace have therefore been voiced.[4] Some have also remarked on the "collective mania" especially in the US that takes a sort of pride in the "work at all times" attitude exemplified by the 24/7 concept.[5]

In England, Wales, and Northern Ireland, the Sunday trading laws prevent many stores from truly opening 24/7, but they sometimes advertise as such. Some core services such as filling stations are exempt from the law requiring them to close. A campaign against changing the law was supported by many bodies, including the Church of England, the Church in Wales, and many secular bodies in an effort called Keep Sunday Special.