The NDP won 24 seats in total: including nineteen seats in Edmonton, three seats in Calgary (Calgary-Buffalo, Calgary-McCall and Calgary-Mountain View), and the seats of Lethbridge-West and St. Albert, a total of 24. The UCP won the remaining 63 seats in the province. Two other parties that won seats in the 2015 election, the Alberta Party and the Alberta Liberals, failed to win any seats, making this election the first Alberta general election since 1993 where only two parties won seats.

The Election Act fixes the election date to a three-month period, between March 1 and May 31 in the fourth calendar year after the preceding election day which in this case was May 5, 2015. However, this did not affect the powers of the Lieutenant Governor to dissolve the Legislative Assembly before this period.[3]

This election resulted in the highest voter turnout since 1982[4] at 64%, rising from 57% in the last general election held in 2015.[1][5] It marked only the fifth change of government since Alberta joined Canada in 1905, and also the first time that an incumbent government has failed to win a second term.

The United Conservative Party made a small improvement in its overall share of the popular vote compared to the combined vote of the Progressive Conservative and Wildrose parties which preceded it. The party won 63 seats. The UCP finished no lower than second place in any constituency. UCP leader Jason Kenney won re-election in his constituency.

The Alberta New Democratic Party lost about one-fifth of its vote share, although due to the considerably higher turnout compared to 2015 it actually gained votes. The NDP with 24 seats formed the opposition in the Alberta legislature. The NDP finished first or second in 85 out of 87 ridings. NDP leader and outgoing premier Rachel Notley won re-election in her constituency.

The Alberta Liberal Party finished fourth in the overall popular vote, with its vote share falling by more than three quarters. They were shut out of the legislature for the first time since 1982. Liberal Leader David Khan placed fourth in his constituency, which was formerly represented by his retiring predecessor David Swann.

A number of minor parties, including several running to the right of the UCP, contested the election, but none came close to winning any seats. The Alberta Independence Party (which fielded the most candidates after the UCP, NDP and AP) finished fifth in the overall popular vote. The Freedom Conservative Party finished sixth, although they ran fewer candidates compared to the other parties. On average, FCP candidates polled the most votes outside the three largest parties. The FCP's only incumbent (party founder and leader Derek Fildebrandt), who had been originally elected as a representative for the now defunct Wildrose Party, finished a distant third in his own riding. The Green Party of Alberta finished seventh in the overall popular vote and the Alberta Advantage Party finished eighth.

The last time only two parties took all of the seats was in 1993, and the only time before that was in 1913 after the defeat of Socialist Party MLA Charles O'Brien and before the rise of farmer and labour parties. Incumbent Independent MLA Rick Strankman - previously a UCP MLA - finished second place in his riding.

This was the first provincial election in which eligible voters could cast ballots in any advance poll in the province (called the "Vote Anywhere" feature by Elections Alberta).

Notley's 24-member caucus is the largest Official Opposition caucus since the Liberals won 32 seats in 1993. 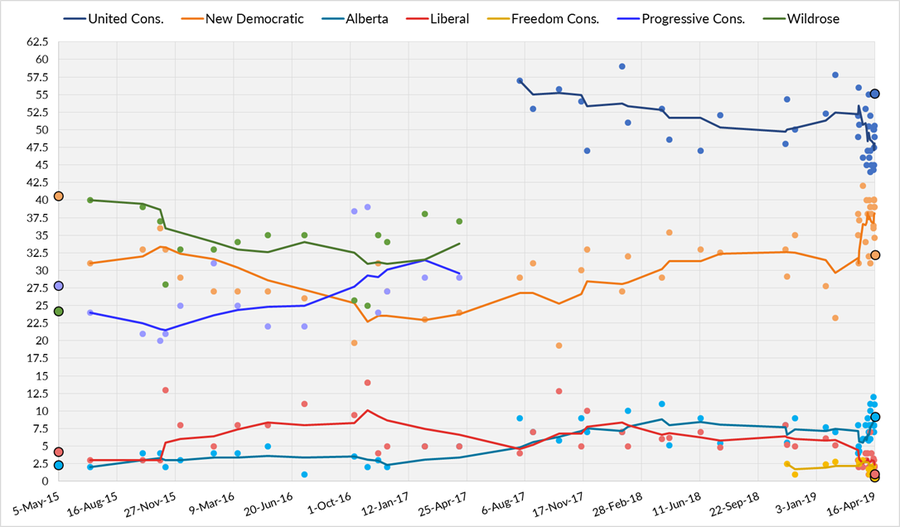 The following is a list of scientific opinion polls of published voter intentions.

The following MLAs have announced that they would not run in the 2019 provincial election:

Party leaders are in bold. Candidate names appear as they appeared on the ballot.

† = Not seeking re-election
‡ = Running for re-election in different riding