Student-athletes from all over the world between the ages of 17 and 28 arrived in Almaty to take part in Winter Universiade organized by FISU.[2]

There were two candidates to host the event.

«Given the difficult economic situation in Italy and the high financial obligations to the International Federation for the moment, the Council of the Autonomous Province of Trento sees no possibility to raise funds for the Universiade in 2017 and therefore removes the candidature of the city.»

Later Trentino was invited to host the 2013 Winter Universiade, after Maribor withdrew to host the event.[3]

Formal decision on the Universiade in Almaty was taken on a vote of the International University Sports Federation (FISU) on November 29, 2011, which was held in Brussels (Belgium).

Thus, due to the lack of competitors, Almaty was declared the host city of the 28th Winter Universiade in 2017.

Earlier it was reported that Kazakhstan would spend $950 million on Winter Universiade 2017. An Ice Palace, two ice rinks, an Athletic Village and international airport terminal and many more other sport and non-sport venues were to be built in Almaty for the event. The cost is considered small, and it is because some of the objects had already been built for the 7th Asian Winter Games,[4] part of the competition which also took place in Almaty, and certain existing and remodeled venues. Kazakhstan chose bandy, ski jumping, Nordic combined, freestyle skiing and speed skating as optional sports, with bandy being in the form of demonstration. However, after tightening the budget, bandy was removed.

The competition schedule for the 2017 Winter Universiade is shown as follows:[5] The opening ceremony of the 28th Winter Universiade was held on 29 January 2017. A total of 1,604 athletes from 56 countries arrived in Almaty to compete in 85 events and 12 types of sports.[6][7]

Bandy was supposed to debut as a demonstration sport.[8] However, after tightening of the budget, Bandy was no longer part of the programme.

56 national university sports federations sent a total of 1,604 athletes.[10] The numbers in parenthesis represent the number of participants. The International University Sports Federation (FISU) declared there were no positive doping cases at the 28th Winter Universiade.[11]

Logo of the Winter Universiade 2017 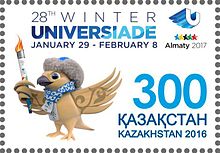 2016 stamp of Kazakhstan showing the mascot of the 2017 Winter Universiade, an eyas.

The logo of the Winter Universiade 2017 was created considering the following images:[12]

The logo was created in bright and soft colors that emphasize the modernity and the eco-friendly approach, which is one of the most important elements of the general concept of the Games.