The 2017 Conservative Party of Canada leadership election was held on May 27, 2017. Party members chose Andrew Scheer as leader, replacing Stephen Harper, who led the Conservative Party of Canada as its leader from 2004 following the merger of the Canadian Alliance and Progressive Conservative parties. Harper led the party through five federal elections: the party increased its seat count in the House of Commons in 2004, formed two minority governments in 2006, and 2008, and then a majority government in 2011. Following the defeat of the party in the 2015 federal election on October 19, Harper tendered his resignation as party leader.[3] In a statement, Conservative Party President John Walsh said he had spoken to Harper, "and he has instructed me to reach out to the newly elected parliamentary caucus to appoint an interim Leader and to implement the leadership selection process."[4]

Subsequent to the election, fourth placed candidate Brad Trost and his campaign were fined $50,000 by the Conservative Party of Canada for allegedly leaking the party's membership list to the National Firearms Association. Trost denied that he or any of his staff leaked the list.[7] On February 11, 2019, the Conservative Party released a statement from its Leadership Election Organizing Committee (LEOC) which concluded: "In short, LEOC does not believe there is evidence that the Trost Campaign was responsible for leaking of the membership list...." [8] The fine was therefore removed from the Brad Trost Campaign. Trost went on to lose renomination as the party candidate for his riding during the 43rd Federal election on March 10, 2018 to Corey Tochor, former speaker of the Saskatchewan Legislature.[9]

Criticism has been raised about how the party memberships were handled, with some prominent members saying they never received a ballot, even after contacting the party about it.[10]

In addition, the result of the leadership race and party handling was questioned by some supporters of such as runner-up Maxime Bernier and fifth place candidate Kellie Leitch due to discrepancies in the final ballot count, specifically a gap between the number of ballots cast and the announced result - a 7,466 vote discrepancy, which is greater than Andrew Scheer's 7,049 votes margin of victory in the final round. There was criticism over the exact role of the accounting firm Deloitte during the voting process - a deal revealed that Deloitte was not specifically tasked with auditing the vote but "observe" the counting process.[11][12] It was also reported that some of Brad Trost's supporters contravened the Elections Act and party membership rules by offering incentives to vote. Dimitri Soudas, a former Stephen Harper aide, pointed out that it violated election rules and it benefited Scheer's campaign but the ballots have been destroyed so the results stood.[13]

Conservative Party president John Walsh's letter to caucus stated that only Members of Parliament (MPs) would vote for the interim leader, but Conservative Senators pointed out that the party constitution states that the entire parliamentary caucus votes.[14][15] The caucus allowed Senators to vote, declining to adopt the provisions of the Reform Act that would have only allowed MPs to vote.[16][17]

The caucus chose Rona Ambrose, MP for Sturgeon River—Parkland, Alberta and former Minister of Health, as interim leader at its first meeting on November 5, 2015, in a vote by preferential ballot.[18][19][20] Ambrose, as the interim leader, also served as Leader of the Official Opposition in the Parliament of Canada until a permanent leader was chosen. She defeated Candice Bergen, Diane Finley, Mike Lake, Rob Nicholson, Erin O'Toole, and the joint ticket of Denis Lebel and Michelle Rempel in the caucus vote.[21][22][23][20][24]

Under the party's constitution, Ambrose, as the interim leader, could not run for the permanent position.[22]

Following Harper's resignation, debate emerged within the Conservative Party regarding the timing of the leadership election. Some members of the party's national council called for a leadership convention as early as May 2016 according to Maclean's magazine.[25] However, interim leader Rona Ambrose has said there is a consensus among the party's caucus that the leadership election shouldn't be rushed and should be held sometime in 2017.[26][27][27][28] In a December 2015 interview, Ambrose said the party would take its time allowing all members, including those not already involved in politics, to build a strong candidacy. "If we take a little extra time, that will mean we'll have a better leadership race."[29]

Only party members in good standing at 5pm Eastern Time on March 28, 2017, were allowed to vote.[2][31] The fee for a party membership was raised from $15 to $25, an increase that was reversed on April 23, 2016, after criticisms that the move was "elitist".[32] Membership fees could only be paid via personal cheque or credit card. Cash payments were not permitted. This new requirement was intended to prevent the election being dominated by new members, and to prevent anyone other than the individual member, such as a candidate's campaign, from signing up scores of members and paying the membership fees in cash out of campaign funds.[33] Despite this, the Conservative Party confirmed irregularities with 1,351 memberships connected to prepaid credit cards that it subsequently struck from its membership roll.[34]

To register, candidates must:[2]

A party committee reviewed the candidate's nomination form and may disqualify a potential candidate.[39] Candidates are allowed to spend a maximum of $5 million on their campaigns.[40] 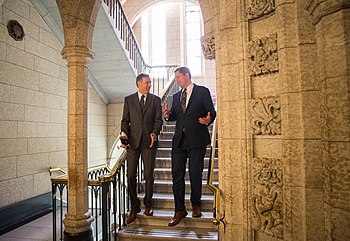 Maxime Bernier and Andrew Scheer walking down the stairs at Parliament Hill, May 30, 2017. 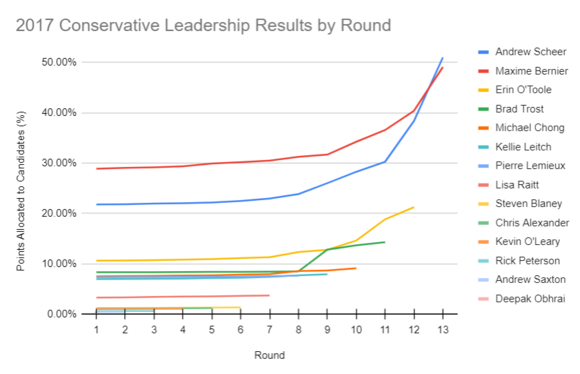 2017 Conservative leadership election results by round.

Candidates who have paid their entrance fee and compliance deposit and filed their nomination papers:[58] 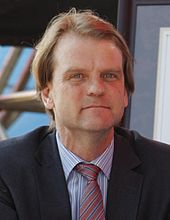 Chris Alexander, 52, is the former Minister of Citizenship and Immigration (2013–2015), Parliamentary Secretary to Minister of National Defence (2011– 2013)[59] and the former MP for Ajax—Pickering, Ontario (2011–2015). Prior to entering politics, he served as a member of Canada's foreign diplomatic service, most notably in the Canadian Embassy in Moscow and as the Canadian Ambassador to Afghanistan from 2003 to 2005.[60] From 2005 to 2009 he held the post of Deputy Special Representative of the United Nations Secretary General for Afghanistan.[61] In addition to English, he is fluent in both French and Russian languages.[62][63]

He believes that immigration is the key to "economic growth."[59] Is proposing to increase immigration to 400,000 a year[59] including 40,000 refugees and calling for doubling defence spending and "for an accelerated push to settle all outstanding land claims and to sign treaties with First Nations communities that would empower them to govern themselves".[64] Was prominent in the Conservative government's handling of the Syrian refugee crisis and in the government's promise during the 2015 election to create a telephone tip line to report so-called "barbaric cultural practices."[67] As minister, he was criticized over delays in meeting the government's commitment to resettle Syrian refugees.[68] 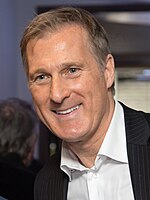 Provincial politicians:
Municipal politicians:
Former MPs:
Former Senators:
Former provincial politicians:
Former municipal politicians:
Other prominent individuals:
Organizations:
Media:
Policies
Supports banning the wearing of the niqab while voting, taking the citizenship oath, or by federal public servants,[59] even if such a ban would require invoking the notwithstanding clause of the Constitution in order to override the Charter of Rights and Freedoms.[161] Also advocates testing of would be citizens on "their understanding and appreciation of Canada's core principles."[162] He wants to "beef up" screening.[68] The number of immigrants he wants to bring in will be based upon labour-market studies.[68] 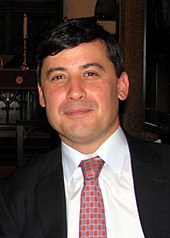 Michael Chong, 48, is the MP for Wellington—Halton Hills, Ontario (2004–present) and was the Deputy Shadow Minister of the Environment (2015–2016). He was Minister of Intergovernmental Affairs and Youth (2006)[59] and Minister of Sport (2006). Chong resigned from the Harper cabinet in 2006 to protest the government's recognition of the Québécois as a nation within Canada.[59] As a backbench MP he advocated democratic reforms in Parliament to limit the power of the Prime Minister's Office and party leaders over their caucuses and individual MPs and introduced the Reform Act to give caucuses the option of the power to remove party leaders, elect caucus chairs, and expel or readmit MPs, and elect interim leaders.[16][163][164][165] He was a member of the Progressive Conservative Party at the time of the merger.[59] 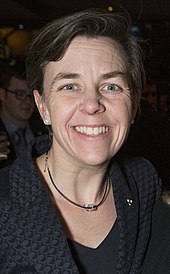 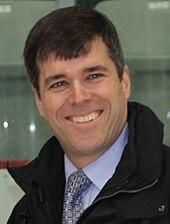 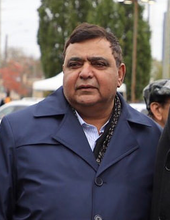 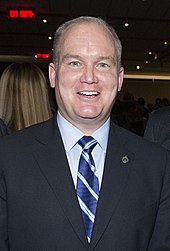 Rick Peterson, 61, is a venture capitalist, party fundraiser, the principal of Peterson Capital, and a former candidate for leadership of the British Columbia Conservative Party.[59][287] He was a member of the Progressive Conservatives at the time of the merger.[288] 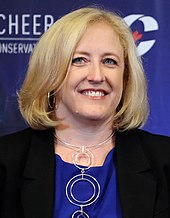 Saxton's campaign is an economic platform.[59] He plans on lowering taxes and balancing the budget.[59]

Running as an "unapologetic" Conservative who can unite all wings of the party.[379][380] He is "committed" to lower taxes,[59] fiscal responsibility,[59] and "compassion". Scheer believes that there should be a "more robust screening process."[381] Scheer is pro-life, but doesn't intend to bring any legislation on the topic.[381] Scheer advocates for immigration based process, economic indicators, and "what our society needs."[68] 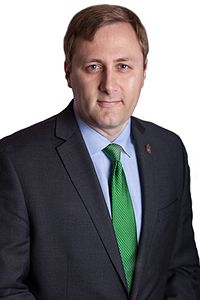 Brad Trost, 46, MP for Saskatoon—University, Saskatchewan (2015–2019), had represented Saskatoon—Humboldt, Saskatchewan (2004–2015), and was appointed Official Opposition Critic for Canada-U.S. Relations (2015–2016) following the 2015 election. Prior to election, Trost worked as an exploration geophysicist (prospector) in natural resources extraction in the north. He was also an active participant in his family's mixed grain, oilseeds and beef cattle farm operation. In his first Parliament, he founded the Conservative Party Energy Caucus and pushed for the re-creation of the Standing Committee on Natural Resources. He has served on the Standing Committees on International Trade and on Industry, and was elected vice-chair of the Canada-U.S. Parliamentary Association.[382] 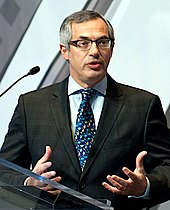 Daniel Lindsay, 60, president of the College of Physicians and Surgeons of Manitoba, radiologist, has done five tours as a civilian medical specialist with the Canadian Armed Forces, including in Kandahar, Afghanistan.[397]

Date campaign announced: January 18, 2017[418]
Date withdrawn: April 26, 2017[127]
Other information
O'Leary withdrew from the election despite polls showing he was the frontrunner. He stated that while he believed he could win the leadership election, he would be unable to defeat Justin Trudeau in the next federal election due to his inability to speak French fluently and his lack of support in Quebec. He endorsed Maxime Bernier.[54] As his withdrawal took place after the deadline, O'Leary remained on the final leadership ballot.

Adrienne Snow, 49, Toronto-based communications consultant, former director of policy for National Foundation for Family Research and Education. Former executive director of Centre for the Study of Civic Renewal. Announced on August 23, 2016, that she intended to be a candidate but failed to register and announced in January that she was ending her campaign.[419]

Some of the polls below were conducted before nominations for the leadership closed and therefore include potential candidates for the leadership race. Rona Ambrose, as interim leader, is ineligible to run for the permanent leadership unless there is a change to the party's constitution.