The 2017 Census of Pakistan was a detailed enumeration of the Pakistani population which began on 15 March 2017 and ended on 25 May 2017. The census was conducted by the Pakistan Bureau of Statistics for the first time in 21st century, after 19 years.[1][2] Initial estimates would put the population at 20 crore (210–220 million).[3] The provisional results were finally presented to the Council of Common Interests on 25 August 2017, and then approved and released to the public. The results showed a total population of Pakistan at 207,774,520 people.[4][5][6][7] It didn't include the population of autonomous regions of Azad Kashmir and Gilgit-Baltistan. As of December 2019, the complete and final results of the census had still not been published.[8]
The 2018 Pakistani general election was held under a new delimitation of constituencies, based on the provisional results of the 2017 census.[9]

The census was conducted by 91,000 enumerators from various government sectors, of which the Pakistan Army provided security with 200,000 personnel.[10] The census recorded a total of 9 languages out of an estimated of 80 languages spoken in the country,[11] and officially recognized transgender as a third gender.[12]

The census was conducted in 2 phases. The first phase lasted from 15 March 2017 to 13 April 2017 and covered 63 districts of the country. The second phase began on 25 April 2017 and lasted until 24 May 2017 covering the remaining 88 districts. However, the census in the Islamabad Capital Territory and neighbouring districts of Attock and Rawalpindi, although included in the second phase, began on 30 March 2017 and concluded on 23 May 2017. Furthermore, for administrative purposes, the census in the Kech District of Balochistan was spread over both phases.[13] 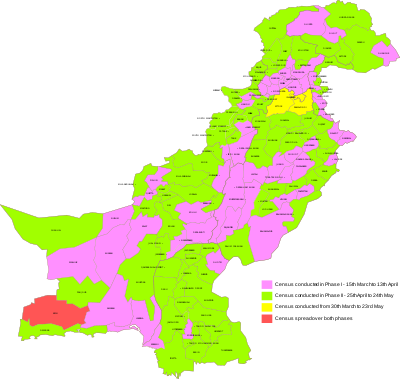 This is a District-by-district Map of Average Annual Population Change by district between 1998 and 2017. It uses data from the PBS (Pakistan Bureau of Statistics)

The population of 10 major cities of the country has increased by 74.4 percent since 1998, when the last census was conducted, according to the data of recently concluded 6th Population and Housing Census 2017.

The Religion census data was due to be released in March 2018 but it has still not been made public. Mangla Sharma, provincial lawmaker from Muttahida Qaumi Movement-Pakistan (MQM-P) said “The government must end its discriminatory policies and focus on releasing the results,”.[25][26]

The Sindh Assembly refused to accept the results of the 2017 census, stating that millions of people were shown with double addresses and counted in their home provinces despite living and working in Sindh.[28] In April 2018, Mustafa Kamal, chairman of the Pak Sarzameen Party and former Mayor of Karachi, challenged the results of the 2017 census in the Supreme Court, seeking a third-party audit of the national census. Kamal pleaded that records from the National Database and Registration Authority (NADRA) showed the population of Karachi to be 20.15 million, rather than 16 million as shown in the census.[29]

Shahab Uddin Khan, a Member of the National Assembly (MNA) from Bajaur Agency, has stated he believes that a large number of people displaced from the Mamund and Nawagai regions due to security operations have not been counted by the census. He has stated he intends to challenge the census in court. Bismillah Khan, an MNA from Bajaur Agency, has stated he believes the population of the Federally Administered Tribal Areas is double of what is reflected in the census. He added that he will take up the issue with the federal government along with other lawmakers. Sajid Hussain Turi, an MNA from Khyber Agency, claimed that more than three million people from FATA are living in other cities in the country due to military operations, and expressed concern that developmental work in the region could be underfunded if the population is underestimated by the census.[30]

Syed Khurshid Ahmed Shah of the Pakistan Peoples Party (PPP), Former Leader of the Opposition in the National Assembly, questioned the provisional census results. He issued a statement demanding that data collected by the statistics division should be compared to data from the Pakistan Army. PPP leader Nawab Muhammad Yousuf accused authorities of doctoring the results, alleging that the population of Sindh had been intentionally underestimated by at least 10 million and the population of Punjab had been overestimated by 10 million. He described the results as an attempt to usurp the rights of Sindh. PPP Senator Mukhtiar Ahmed Dhamrah disputed the population of Karachi and Lahore reported in the preliminary results.[31]

Bushra Gohar, leader of Awami National Party (ANP), pointed out in a tweet that the reported population of around 5 million for the Federally Administered Tribal Areas seems contradictory to the fact that there have been nearly 2 million internally displaced persons registered from North Waziristan alone.[31]