The 2016 Manitoba general election was held on April 19, 2016 to elect members to the Legislative Assembly of Manitoba, Canada.[1] The New Democratic Party of Manitoba, led by Greg Selinger, were defeated by the Progressive Conservative Party of Manitoba led by Brian Pallister, ending nearly 17 years of NDP government. The Tories won 40 seats, one of the largest majority governments in Manitoba history, the other one was in 1915 when Liberals also won 40 seats.[2]

Under the Manitoba Elections Act, the general election is to be held on the first Tuesday of October in the fourth calendar year, following the previous election.[3] As the last election was held in 2011, that date would be October 6, 2015. However, the act also provides that if, as of January 1 of the election year, the election period would overlap with a federal election period, the provincial election is to be postponed until the third Tuesday of the following April.[4] Under the federal fixed-term act, on January 1, 2015, the next federal election was tentatively scheduled for October 19, 2015, overlapping election periods by approximately three weeks. Thus the next Manitoba election was scheduled for April 19, 2016. The Lieutenant Governor retains the power to dissolve the Legislative Assembly early.[5] The legislature was dissolved and writs or the election were dropped on March 16, 2016.[6]

The election was relatively unique within Canadian politics, in that opinion polling indicated that most voters were basing their decision on the local candidate in their riding or the party platform, not the performance of the leader. In most Canadian elections, such as the 2016 Saskatchewan election, the behaviour of the party leader was a stronger motivator for constituents when voting;[7] in the context of the Manitoba election, however, polling found that none of the three main party leaders was particularly well-liked or trusted by the electorate.[8] Although Pallister fared best with 33 per cent support in public opinion polling on the question of preferred premier, even he finished only one point ahead of "none of the above" at 32 per cent.[8]

The campaigns of all three parties were based on themes of change, with even Selinger suggesting the incumbent NDP government would be able to respond to constituent concerns and change problematic policies in the leaders' debate.[7] Opinion polling during the campaign suggested a lack of enthusiasm for all party leaders, and a general desire for change.[9]

The Tories went into the election as heavy favourites, having led opinion polls for almost four years. They scored a near-sweep of rural southern and central Manitoba, and also made significant inroads in Winnipeg, taking every seat in the southern and western portions of the capital. In many cases, previously safe NDP seats either fell to the Tories or saw the NDP margins cut by more than half.

Incumbents not contesting their seats 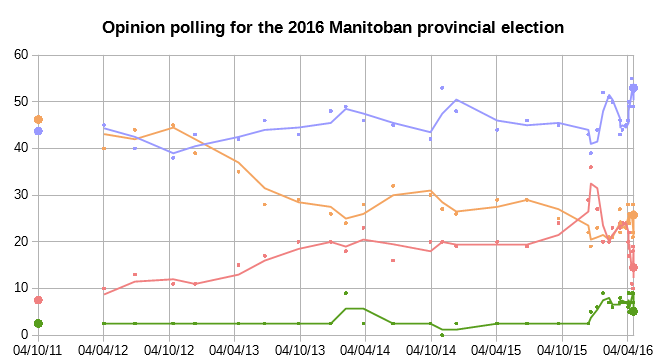