A constitutional referendum was held in Italy on Sunday 4 December 2016.[1] Voters were asked whether they approve a constitutional law that amends the Italian Constitution to reform the composition and powers of the Parliament of Italy,[2] as well as the division of powers between the State, the regions, and administrative entities.

The bill, put forward by then-Prime Minister of Italy, Matteo Renzi, and his centre-left Democratic Party, was first introduced by the government in the Senate on 8 April 2014. After several amendments were made to the proposed law by both the Senate and the Chamber of Deputies, the bill received its first approval on 13 October 2015 (Senate) and 11 January 2016 (Chamber), and, eventually, its second and final approval on 20 January 2016 (Senate) and 12 April 2016 (Chamber).[3]

In accordance with Article 138 of the Constitution, a referendum was called after the formal request of more than one fifth of the members of both the Senate and the Chamber of Deputies,[4] since the constitutional law had not been approved by a qualified majority of two-thirds in each house of parliament in the second vote.[5] 59.11% of voters voted against the constitutional reform, meaning it did not come into effect.[6] This was the third constitutional referendum in the history of the Italian Republic; the other two were in 2001 (in which the amending law was approved) and in 2006 (in which it was rejected).

Had the voters approved the constitutional law, it would have achieved the most extensive constitutional reform in Italy since the end of the monarchy, not only influencing the organization of the Parliament, but also improving, according to its proponents, on the poor government stability of the country. Opposition parties and well-known jurists (such as Gustavo Zagrebelsky[7] and Stefano Rodotà[8]) harshly criticised the bill, claiming that it was poorly written and would have made the government too powerful.[9][10]

Following the clear victory of the "No" vote, Renzi tendered his resignation as Prime Minister.[11] Paolo Gentiloni was selected as his replacement on December 11.[12]

Palazzo Madama, the meeting place of the Italian Senate.

The Italian Parliament is described as a perfectly symmetric bicameral legislature, in that it has a lower house (the Chamber of Deputies) and an upper house (the Senate of the Republic) with the following characteristics:

The first concrete attempts at reforming the Senate took place in the 1980s, when the first bicameral committee for constitutional reform headed by Aldo Bozzi was created (1983).[13] A second bicameral committee (headed by Ciriaco De Mita, later replaced by Nilde Iotti) operated in 1992–1994,[14] followed in 1997 by the third committee headed by the leader of the Left Democrats, Massimo D'Alema.[15] These attempts were unsuccessful.

A reform bill proposed by Silvio Berlusconi's government was finally approved by the parliament in 2005.[16] This proposal, which would also have considerably strengthened the powers of the Prime Minister, at the same time weakening the role of the President,[17] was ultimately rejected in the 2006 referendum.

In 2011, with the financial crisis ensuing and Berlusconi forced to resign from the position of Prime Minister,[18] the Parliament reprised discussions on constitutional reforms at the urging of president Giorgio Napolitano.[19] However, strong disagreements between the two main parties (the People of Freedom and the Democratic Party) prevented the Parliament from deciding on a reform.

After the 2013 general election, constitutional reform remained a prominent political topic. However, the first real breakthrough occurred when Matteo Renzi, the new Secretary of the Democratic Party, was appointed Prime Minister in February 2014. As part of his government's program, Renzi pledged to implement a number of reforms, including the abolition of the perfectly symmetric bicameralism, with a substantial decrease in the membership and power of the Senate. As well as effectively abolishing the current Senate, the package also included a new electoral law, aimed at giving the party that won the most votes in elections for the Chamber of Deputies a great many additional seats, allowing the formation of a stronger government.

After the proposals passed both the Chamber of Deputies and the Senate twice, as required by Article 138 of the Italian constitution, Renzi announced that he would hold a referendum to secure the endorsement of the Italian people for the change. In January 2016, announcing an October date for the referendum, Matteo Renzi stated that if his reforms were rejected he would resign as Prime Minister and leave politics.[20] Some opposition parties, predominantly Five Star Movement, Lega Nord and Italian Left, and also some newspapers like Il Fatto Quotidiano and Il manifesto, accused Renzi of turning the referendum into a plebiscite on his premiership with those comments.[21] However, after some months, Renzi said that his government will continue until the end of the legislature.

On 15 January 2016, La Repubblica announced that Renzi had hired American political adviser Jim Messina – who had worked with Barack Obama[22] and David Cameron[22] and would later work for Mariano Rajoy[23] – to oversee the campaign for "Yes".[24]

Details of the proposed change

Role and powers of the Senate

Senators enjoy the same immunities as the deputies, but receive no remuneration.[26]

The Government does not need to have the confidence of the new Senate, and the Senate cannot pass a motion of no confidence against the Government.[27]

Composition of the Senate

No seats are assigned to the overseas constituencies of Italian Parliament (unlike in the Chamber of Deputies and the pre-reform Senate).[31]

Apportionment of seats among regions

a Autonomous province, part of the region of Trentino-South Tyrol.

Under the unicameral procedure (which is used every time the Constitution does not require a special procedure), bills can be adopted by a vote of the Chamber of Deputies. At that point, the approved bill is sent to the Senate, which has 10 days to decide whether to examine it to propose changes, or let it be enacted without modification. If one-third of the senators ask to review the bill, the Senate has 30 days to formulate amendments and send the bill back to the Chamber of Deputies. Then the deputies will take the final decision on the Senate's proposals and on the bill as a whole. No further approval of the Senate is needed, but a qualified majority might be required to overcome the Senate's veto for laws adopted under the supremacy clause.

The bicameral procedure works in a similar way to the current legislative procedure, in that bills must be approved in the same text by both houses to be enacted, and will be forwarded from one house to the other until approved by both. This procedure is required for bills regarding the following.

Opponents to the referendum argue that the legislative procedures under the reformed Constitution would be much more than two, because of the several articles that introduce exceptions.[36][37]

The reform draws a different partition of matters reserved to the State and to the regions. The so-called "concurrent competence", according to which State law legislates the principles that are later to be implemented by regional laws, is abolished. All concurrent matters are reassigned to either the State's or the regions' competence.[38]

The Government can propose legislation to the Parliament on matters that are not reserved to the State, when this is required to protect the juridical or economic unity of Italy, or to protect national interests.[38] Such laws are adopted according to the unicameral legislative procedure: however, when modifications are proposed by an absolute majority of the members of the Senate, the Chamber of Deputies can override the proposals only by voting against them with an absolute majority of its members.[34]

The National Council for Economics and Labour[39] (CNEL), which is a consultative assembly of experts of the economic, social, and legal fields, representatives of public and private-sector producers of goods and services, and representatives of social service and voluntary organisations, is abolished.[40]

Provinces (the second-level administrative divisions of Italy) are removed from the Constitution, except for the autonomous provinces of Bolzano and Trento.[41] This opens the door for ordinary laws to abolish or radically reform them. In 2014–15 fourteen provinces were already replaced by "metropolitan cities" (that still exist in the reformed Constitution).

Books about the 2016 constitutional referendum.

Prime Minister Renzi was accused by some law scholars and politicians, such as Stefano Rodotà and Fausto Bertinotti, of being authoritarian and anti-democratic for proposing this reform.[48][49][50][51][52] Others, like Gianfranco Pasquino, argue that the adopted text is badly written.[53][54]

Ballot used in the referendum

Sardinia and South Tyrol, both constituent entities of the Italian Republic with special conditions of autonomy, reported overall the highest percentage[96] of No[97][98] and Yes[99] votes respectively.

Votes of Italians abroad by country[100] 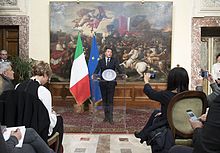 Renzi announces his resignation after the referendum result.

After the first exit polls, Prime Minister Matteo Renzi announced in a midnight press conference that he would resign the next day.[101][102] In his speech, Renzi assumed full responsibility for the referendum defeat.[101]

The President of the Italian Republic Sergio Mattarella asked Matteo Renzi to briefly postpone his resignation, in order to complete the parliamentary approval of the next year's budget law. After the budget was passed on 7 December, Renzi resigned that night.[103]

Financial markets were not particularly affected by the defeat of the constitutional reform: the Milan stock exchange closed the Monday session on stable (−0.2% on respect of previous Friday closing, before the vote),[104] while on Tuesday 6 December the stock index jumped at +4.15% (best result since 11 March 2016).[105]