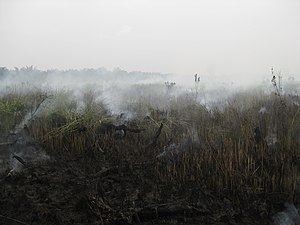 A peat fire near the Raja Musa Forest Reserve in Selangor, Malaysia (2013). The fires are below the surface, where the peat is smoldering.

The Southeast Asian haze is a fire-related large-scale air pollution problem that occurs regularly. Generally, it is worst between July and October.[1] These haze events have caused adverse health and economic impact on Brunei Darussalam, in Indonesia, Malaysia, Singapore and, to a lesser degree, the Philippines and Thailand.[2][3] The problem flares up every dry season, in varying degrees.[4] Transboundary haze in Southeast Asia has been recorded since 1972.[5]

The haze is largely caused by illegal agricultural fires due to industrial-scale slash-and-burn practices in Indonesia, especially from the provinces of South Sumatra and Riau in Indonesia's Sumatra island, and Kalimantan on Indonesian Borneo. Burned land can be sold at a higher price illegally, and eventually used for activities including oil palm and pulpwood production. Burning is also cheaper and faster compared to cutting and clearing using excavators or other machines.[6][7]

Most haze events have resulted from smoke from fires that occurred on peatlands in Sumatra and the Kalimantan region of Borneo island.[8][9]

Undisturbed humid tropical forests are considered to be very resistant to fire, experiencing rare fires only during extraordinary dry periods.[10]

A study published in 2005 concluded that there is no single dominant cause of fire in a particular site and there are wide differences in the causes of fires in different sites. The study identified the following direct and indirect causes of fire:

Fire as a tool in land clearing

Fire is the cheapest and fastest method to clear land in preparation for planting. Fire is used to clear the plant material left over from logging or old crops. Mechanically raking the plant material into long piles and letting them rot over time, is expensive and slow, and could harbour pests. Clearing land with machines and chemicals can cost up to US$200 per hectare while using fire costs US$5 per hectare.[12]

After a peat swamp forest has been cleared and drained, the peat soil is still unsuitable for agriculture, because peat soil is nutrient-poor and acidic (pH 3 - 4). To make the soil suitable for agriculture, the pH has to be neutralised and nutrients added. Pests and plant diseases also have to be removed. One method is to use chemicals such as limestone to neutralise the acidity, as well as fertilisers and pesticides. This method costs about Rupiah 30 - 40 million per hectare. Alternatively, fire is used to clear the plant material left over from logging. The fire kills pests and the resulting ash serves to fertilise the soil and neutralise the acidity. This method costs Rupiah 2 million per hectare.[13]

In Indonesia, the Basic Forestry Law grants the Ministry of Forestry authority over all land classified as forests. Approximately 49% of the nation (909,070 square kilometres) is covered by actual forest, although the government classifies 69% of the land area (1,331,270 square kilometres) as forest. The land rights of traditional communities that live on land classified as forest cannot be registered and are generally unrecognised by the state.[14] Therefore, these communities do not really have the ability to enforce rules at the village level and exclude outsiders such as oil palm plantations, logging companies, residents of other villages, migrants, small-scale loggers or transmigrants. Competing claims in turn leads to land conflicts.[15] As the number of new, external actors increases, so does the likelihood that fire will be used as a weapon.[16]

Peat forms under waterlogged conditions in peat swamp forests such as this one in Raja Musa Forest Reserve, Selangor, Malaysia.

A peatland is an area where organic material such as leaves and twigs had accumulated naturally under waterlogged conditions in the last 10,000 years. This layer of organic material, known as peat, can be up to 20m deep. Indonesia has 265,500 km2 of peatland, which comprises 13.9% of its land area. Malaysia also has significant peatland, at 26,685 km2, covering 8.1% of its land area.[17]

Although originally a wetland ecosystem, much of the peatland in Southeast Asia have been drained for human activities such as agriculture, forestry and urban development. A report published in 2011 stated that more than 30% of peat swamp forests had been converted to agricultural land and a further 30% had been logged or degraded in the past 20 to 30 years.[18] Excessive drainage in peat results in the top layer of peat drying out. Due to its high carbon content, dry peat is extremely susceptible to burning, especially during the dry season.

Studies have shown that peat fires are a major contributor to the haze. In 2009, around 40% of all fires in Peninsular Malaysia, Borneo, Sumatra and Java were detected in peatlands, even though they cover only 10% of the land area studied.[10] The concentration of sulphur in rain falling over Singapore in 1997 correlated closely with the PM2.5 concentration, which can be attributed to the strong sulphur emission from peat fires.[19]

Haze related damages can be attributed to two sources: the haze causing fire and the haze itself. Each of the two factors can create significant disruption to people's daily lives and affect people's health. As a whole the recurring haze incidents affected regional economy and generated contention between governments of nations affected.

Haze fires can cause many kinds of damage that are local as well as transboundary. These include loss of direct and indirect forest benefits, timber, agricultural products and biodiversity. The fires also incur significant firefighting costs and carbon release to the atmosphere.[20]

Some of the more direct damage caused by haze include damage to people's short term health and regional tourism during haze periods. The haze also leads to industrial production losses, airline and airport losses, damage to fisheries, and incurs the costs on cloud seeding. In addition, severe haze weather can lead to long-term health damage, reduced crop productivity, reduced visibility, avertive expenditures, accidents, loss of life, evacuations, and the loss of confidence of foreign investors.[20]

The health effects of haze depend on its severity as measured by the Pollutants Standards Index (PSI). Levels above 100 are classified as unhealthy and anything above 300 - as hazardous.[21] There is also individual variation regarding the ability to tolerate air pollution. Most people would at most experience sneezing, running nose, eye irritation, dry throat and dry cough from the pollutants.

However, persons with medical conditions like asthma, chronic lung disease, chronic sinusitis and allergic skin conditions are likely to be more severely affected by the haze and they may experience more severe symptoms. Children and the elderly in general are more likely to be affected.[3] For some, symptoms may worsen with physical activity.[22]

The transboundary Southeast Asian haze has been linked to various cardiovascular conditions including acute ischemic stroke,[23] acute myocardial infarction[24] and cardiac arrest.[25] These studies found dose-dependent effect of PSI on the risk of development these conditions. There appears to be increased susceptibility amongst the elderly and those with past history of heart disease and diabetes mellitus.[25] The risk is elevated for several days after exposure. PSI during periods of haze has also been correlated with all-cause mortality,[26] as well as respiratory-illnesses that presented to Emergency Departments and hospital admissions.[27]

The below solutions are proposed by Dennis et al. to mitigate the direct and indirect causes of fires which result in haze.[11]

Reduce the use of fire as a tool in land clearing

Indonesian law prohibits the use of fire to clear land for any agriculture but weak enforcement is a major issue. Many companies have also claimed that zero burning is impractical and uncompetitive given the lack of meaningful penalties for illegal burning.

Research shows that the most common cause of fire was related to competition and conflict about land tenure and land allocation. Land-use allocation decisions made by central government agencies often overlap with the concession boundaries of local jurisdictions and indigenous communities’ territories. Regional reforms are needed to resolve the resource conflicts and they offer opportunities for the regional government to reconcile decisions with those of local and customary institutions. Regional reforms should also ensure that land and resource allocations and decisions at all levels are compatible with physical site characteristics, prominently taking fire risks into account. However, Indonesia's legacy of inaccurate maps, overlapping boundaries, and a lack of technical expertise at the Provincial and District levels will make this a difficult task.

Policies to improve land management and measures to restore ecological integrity to degraded natural forests are extremely important to reduce the incidence of repeated fires. Promoting community involvement in such rehabilitation efforts is critical for their success in reducing fire risks.

Capacity to prevent and suppress fires

The fires in Kalimantan and Sumatra highlight the need to develop fire management systems that address concerns of specific areas. Sufficient resources must be made available to improve fire management in regions that need them, while recognising the diverse needs of different regions and the people within them.

Technology such as remote sensing, digital mapping, and instantaneous communications can help to predict, detect, and respond to potential fire crises. However, such technology should be broadly accessible, widely used, and transparently controlled before they can be effective in improving fire management in remote regions.

In addition to effective criminal and monetary penalties for illegal burning and liability for fire damage, some policy analysts believe in the potential for economic policy reforms and market-based incentives. A combination of eco-labeling and international trade restrictions could reduce markets for commodities that posed high-fire risks in their production. The government could also provide fiscal advantages to support companies’ investments in fire management.

It generally refers to haze occurring in Southeast Asia. In specific intense cases, it may refer to: