The 2012 Quebec student protests (movement) were a series of student riots led by student unions such as the Association pour une solidarité syndicale étudiante (ASSÉ), the Fédération étudiante universitaire du Québec, and the Fédération étudiante collégiale du Québec against a proposal by the Quebec Cabinet, headed by Liberal Premier Jean Charest, to raise university tuition from $2,168 to $3,793 between 2012 and 2018.[1] As part of the protest movement, a series of widespread student strikes were organized, involving half of Quebec's student population by April 2012.[2] A third of Quebec students continued to participate in the strike by its 100th day,[3] while a quarter million had participated during its peak.[4] Other students continued to attend their courses.[5]

On May 18, the Government passed Bill 78, an emergency law forbidding picketing or protest near university grounds, and requiring police approval for large public protests anywhere in Quebec. The law was mainly repealed by the Marois government in September 2012[7] and expired in 2013.[8][9][10]

In the Fall of 2012, with a new school term beginning, student participation in the strikes and demonstrations dwindled. The Quebec nationalist Parti Québécois was later elected as minority government and halted any tuition increases in line with its campaign promises.[11]

In the 1960s, the provincial government took over responsibility for higher education. Changes included the creation of a separate pre-university college level, a publicly funded college system, and providing universities enough funding so that it would be affordable to anyone who wanted to attend.[14] These changes in education access gave birth to a Quebec middle class and transformed the possibility of upward mobility in the province.[15]

The province's student associations have a mandatory membership and dues structure. These associations depend on the size and level of the institution.[20]

In smaller colleges and universities, strikes will be campus wide, but at larger schools they usually happen by department so the entire campus is rarely shut down. For example, if engineering students voted to strike, the picket lines would focus only on engineering students. [20]

Most student strikes in Quebec won at least a partial victory.[20] These previous student strikes demanded free tuition, democratic administration of the universities, the expansion of French instruction and facilities, elimination of more stringent aptitude tests, and an increase in bursaries.[21] 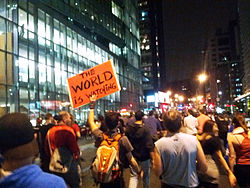 One of the many night protests in the streets of Montreal, 27 May 2012.

In March 2011, Quebec decided to pursue planned five year tuition increases, prompting protests from student groups, and the occupation of the office of the Finance minister.[2]

In July, student leaders accused police of brutality and repression against protesters, whose numbers swelled to 30,000 by November, leading to the occupation of McGill University's administrative building.[2]

On February 23, students are pepper-sprayed by police after occupying Montreal's Jaques Cartier bridge.

On March 7, 2012, during a sit-in demonstration blocking front of the Loto-Québec (lottery) head office, police deployed tear gas and flash-bang grenades against over 1,000 protesters.[2] One student named Francis Grenier had his eye seriously wounded by what he and other demonstrators stated was a flash-bang grenade launched by police.[24] According to the student's father, police investigators sought to demonstrate the wound was caused by a snowball.[24] Students begin to wear patches over their left eyes in solidarity with Grenier.

During the morning rush hour on March 20, 150 student demonstrators blocked the Montreal-bound entrance ramp to the Champlain Bridge in Brossard using concrete blocks.[25] Upon the arrival of Sûreté du Québec police officers, the protesters fled through the streets of Brossard to coaches waiting for them at Terminus Panama. When officers arrived at the Terminus, they surrounded the buses and arrested around 100 demonstrators. Each was identified and fined C$494.[25]

On March 22, an estimated 200,000 people came together for a massive peaceful protest in downtown Montreal.[2] At its peak, the parade stretched up to 50 blocks. While there was no violence, the police confiscated sticks carried by some participants.[26] By this time, over 310 000 students (out of 400 000 in the province) were on strike. [27]

On March 27, protesters block access to the Quebec Liquor Board offices as students begin to target economic symbols.

On April 2, the outside of Line Beauchamp's office is painted red. This building becomes a popular rallying point at marches.

On April 18-19, more than 300 people are arrested in Gatineau, Quebec during confrontations between the police and protesters at Universite du Quebec's Outaouais campus.

In April and early May, 185,000 Quebec students went on strike, with an additional 90,000 students threatening to strike. Quebec education minister Line Beauchamp called on students to negotiate while refusing to negotiate with CLASSE, which she accused of instigating violence. Students demanded that university administrative costs be reduced by $189 million, to pay for teaching and research.[2]

On May 5, after a marathon negotiating session, student groups and government reach deal to delay increases in cost of education for a few months pending a study by a new body. Student assemblies massively reject the offer, while some student faculties vote to end walkout and return to school.

On May 6, 2012, a demonstration took place in Victoriaville, which eventually turned into a riot when vandals started throwing projectiles at the crowd. At least ten people were injured, including some police officers who were attacked by protesters.[28] Two protesters were very seriously injured. The first one lost an eye. The second one sustained head trauma and a skull fracture.[29]

On May 18, 2012, Bill 78 passed in the National Assembly of Quebec during the early hours of the morning and the municipality of Montreal passed a law prohibiting mask-wearing during any organization or demonstration. The nightly protest being held in downtown Montreal ended in violence and 69 arrests. There were reports of projectiles being launched by protesters, as well as molotov cocktails, and police responded by firing rubber bullets and using tear gas and noise bombs against the protesters. Police declared the protest to be illegal.[31][32][33]

On May 19, 2012, Montreal-based band Arcade Fire wore the "red square" solidarity symbol during a performance with Mick Jagger on the season finale of Saturday Night Live.[34]

On May 20, 2012, during an evening protest that turned violent, a protester was seriously injured by police officers in riot gear.[35] Upon attacking an officer, the victim was beaten by five officers with their clubs and forcibly neutralized.

On May 22, 2012, in response to the passage of Bill 78 and in commemoration of 100 days since the beginning of the student strike, another march took place, with tens of thousands of marchers and approximately 1,000 arrests[36] Organizers spun this event as "The single biggest act of civil disobedience in Canadian history."[12][37]

By May 24, 2012, the "Casseroles" series of nightly protests had rapidly expanded to most Montreal residential neighborhoods outside of the usual protest routes. These protests, in which people stood on their own balconies banging pots and pans, emerged as a way of subverting the ban on unannounced street protests.[38][39] Inspired by the cacerolazos of Chile in 1971, these involved residents banging on pots and pans from their windows or taking to the streets with their kitchenware at 8 o'clock. A viral amateur video[citation needed] of one such protest in the Plateau Mont-Royal neighborhood further fueled this phenomenon.

On May 31, the Quebec government stated that it was pulling out of talks meant to end the protest after four days of negotiations with student leaders, without having reached a stable consensus. By that day, more than 150,000 students were estimated to be on strike.[40]

Strikes continued as more thousands more joined the movement to directly protest Bill 78. Since this bill effected all Quebec citizens, groups including trade unions, teachers and professor unions, the Quebec Bar Association, jurists, and hundreds of others joined the protests. Police were now arresting dozens of people each night. During the Canadian Grand Prix weekend (June 9-10, 2012), Montreal police carried out mass preventative arrests.[15]

Bill 78 was repealed in August 2012.[22] After the announcement by ministerial decree of tuition freeze on September 5, 2012, the remaining student associations on strike voted to return to class.

On May 16, soon after the appointment of Michelle Courchesne, she and Premier Charest announced their plan to introduce Bill 78. The bill is titled "An Act to enable students to receive instruction from the postsecondary institutions they attend," and restricts freedom of assembly, protest, or picketing on or near university grounds, and anywhere in Quebec without prior police approval. The bill also places restrictions upon the right of education employees to strike. After 20 hours of debate, the National Assembly passed Bill 78 on May 18, 2012.

This bill was criticized by the United Nations, with the UN High Commissioner stating that: "In the context of student protests, I am disappointed by the new legislation passed in Quebec that restricts their rights to freedom of association and of peaceful assembly". [41] The bill was also denounced by opposition parties.

The red square, symbol of the Quebec student protest against tuition fee increases.
The red square is a symbol of the protest against the raise in university fees. It is the primary symbol that was used in the student protests of 2005 and 2012. The square first appeared in October 2004 when the Collectif pour un Québec sans pauvreté (Collective for a Quebec without Poverty) used it in a campaign against Bill 57. Throughout the 2012 student protest, red squares made of felt, worn by students opposed to tuition increases and their supporters, can also be seen on many monuments, and in the windows of educational institutions, businesses and residences.[42] A giant red square was briefly suspended from the Jacques-Cartier Bridge and the Mount Royal Cross by students from the Université de Montréal during a protest.[43]

After the red square became a well-known symbol in Quebec, other groups decided to use squares of varying colours to promote their own viewpoints.

On April 18, 2012, a group of 300 protesters broke windows and ransacked rooms at the University of Montreal and injured a security guard. Among the six that were arrested, Yalda Machouf-Khadir, the daughter of Quebec solidaire's Amir Khadir, was sued by the University of Montreal for CAD$100,000 in damages.[49] Students were later sentenced to probation and community service.[50]

On May 23, 2012, at around 23h45, about 500 civilians suspected to be protesters were arrested by the Service de police de la Ville de Montréal at the intersections of Sherbrooke Street and Saint-Denis at Montréal. They were not informed as to why they were arrested, police claiming the protest had been declared illegal, but the victims argued that at no occasion had they been informed that the protest was illegal or that they could disperse. The 500 suspected protesters were detained inside buses for 3 to 8 hours. Documents used in court against the city describe people suffering hypothermia and hypoglycemia. Also the 500 citizens were not permitted to use bathrooms for up to 8 hours, the Service de police de la Ville de Montréal would ask people to urinate at the back of the buses because they said the number of officers was insufficient to safely bring everyone to the bathroom one by one. In the end, no one in those buses would have any tickets or accusations. [51]

On June 12, 2012, some protesters were referring to local police authorities as SS and anti-police pamphlets using the swastika were distributed. The use of the Nazi symbolism was quickly decried in the Montreal Gazette by several Jewish organizations. Although it is said that protesters were using these symbols to condemn the recent tactics use by the local police, the CLASSE has implored its members to stop using these symbols.[52]

The protests inspired directors Mathieu Denis and Simon Lavoie to make the 2016 film Those Who Make Revolution Halfway Only Dig Their Own Graves. Denis and Lavoie said they often wondered what happened to these students in later years.[53] Lavoie was particularly influenced by mug shots of four young people who placed smoke bombs on the Montreal Metro during the protests.[54]