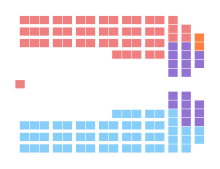 It was the first time since 2007 (and only the third time in Quebec history) that a minority government would be formed, as no party won an absolute majority of the seats. Both the PQ and Liberal vote declined which boosted support for the CAQ and Quebec Solidaire.

During Marois' victory speech, an attack including gunshots and a fire occurred at the Métropolis concert hall housing the event[3] and a forty-year-old man died as a result of gunshot wounds.[4][5]

Pauline Marois on the campaign trail.

Incumbent MNAs who did not run for re-election

† Results change is compared to the Action démocratique du Québec in 2008.
†† The party avoids formally designating David and Khadir as co-leaders, relying instead on internal direct democracy during general assembly meetings; the de jure leader recognized by the Chief Electoral Officer of Quebec (DGE) is Régent Séguin.[38]
* Party did not nominate candidates in the previous election.

^1 Results change is compared to the Action démocratique du Québec in 2008.

Evolution of voting intentions for the 2012 Quebec general election. Dots are individual poll results and trend lines are local regressions with 95% confidence interval.