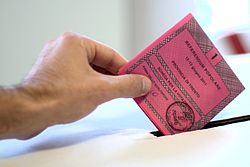 A nationwide popular referendum was held in Italy on 12 and 13 June 2011, on four questions concerning the repeal of recent laws regarding the privatisation of water services (two questions), a return to the nuclear energy which had been phased out after the 1987 referendum, and criminal procedure, specifically a provision exempting the Prime Minister and the Ministers from appearing in court. The first aim of those campaigning for a yes vote was to ensure that the quorum (50% + 1) of the electorate was reached.[1]

Turnout, while below general election records, was higher than it had been for any referendum since 1995; on 12 June 2011, turnout had reached 11.64% at midday,[3] and 30.32% at 19.00, indicating that the necessary quorum would likely be reached.[4] When polls closed on 13 June 2011, turnout was 56.9%, with clear majorities of 94.6% to 96.1% in favour on all questions[5] (meaning that about 53,8% to 54,7% of electorate approved them). Due to Prime Minister Silvio Berlusconi's implicit invitation to boycott the vote (in the hope that the required quorum would not be met), the results don't accurately represent popular opinion.[6][dubious – discuss]

The high offices of the Republic

The President of the Republic Giorgio Napolitano declared he would take part to the referendums, without revealing his intentions regarding the votes.[17]

The President of the Senate of the Republic Renato Schifani underlined the importance of the vote as a form of democratic participation and said he would vote.[18]

The President of the Chamber of Deputies Gianfranco Fini declared he would vote.[19]

The President of the Council of ministers Silvio Berlusconi declared he wouldn't vote.[20] His statement "the Constitution gives the right to citizens to say yes or no to the referendum, but also to say "I do not mind this question, I do not vote." was considered an implicit invitation for his electorate to abstain, so that the referendums would fail quorum.[6]