The 2008 G20 Washington Summit on Financial Markets and the World Economy took place on November 14–15, 2008, in Washington, D.C., United States. It achieved general agreement amongst the G20 on how to cooperate in key areas so as to strengthen economic growth, deal with the 2008 financial crisis, and lay the foundation for reform to avoid similar crises in the future.[1][2] The Summit resulted from an initiative by the French and European Union President, Nicolas Sarkozy, Australian Prime Minister Kevin Rudd, and the British Prime Minister, Gordon Brown.[3][4] In connection with the G7 finance ministers on October 11, 2008, United States President George W. Bush stated that the next meeting of the G20 would be important in finding solutions to the economic crisis. Since many economists and politicians called for a new Bretton Woods system (a monetary management which was instituted after World War II) to overhaul the world's financial structure, the meeting has sometimes been described by the media as Bretton Woods II.[1]

Approaches in the early 2000s

Bretton Woods II was an informal designation for the system of currency relations which developed during the 00's . As described by political economist Daniel Drezner, "Under this system, the U.S. is running massive current account deficits to be the source of export-led growth for other countries. To fund this deficit, central banks, particularly those on the Pacific Rim, are buying up dollars and dollar-denominated assets."[5]

The notion of a "revived Bretton Woods system" was introduced in a 2004 paper by Dooley, Folkerts-Landau, and Garber, in which it is described as arising after the end of the Cold War, out of the choice of countries,

In 2005, Roubini and Setser argued that the system is unsustainable:

If the US does not take policy steps to reduce its need for external financing before it exhausts the world's central banks willingness to keep adding to their dollar reserves – and if the rest of the world does not take steps to reduce its dependence on an unsustainable expansion in US domestic demand to support its own growth – the risk of a hard landing for the US and global economy will grow. The basic outlines of a hard landing are easy to envision: a sharp fall in the value of the US dollar, a rapid increase in US long-term interest rates and a sharp fall in the price of a range of risk assets including equities and housing. The asset price adjustment would lead to a severe slowdown in the US, and the fall in US imports associated with the US slowdown and the dollar's fall would lead to a global severe economic slowdown, if not an outright recession.[7]

On September 26, 2008, French President Nicolas Sarkozy, said, "We must rethink the financial system from scratch, as at Bretton Woods."[8]

On October 13, 2008, British Prime Minister Gordon Brown said world leaders must meet to agree to a new economic system. "We must have a new Bretton Woods, building a new international financial architecture for the years ahead."[9] However, Brown's approach is quite different than the original Bretton Woods system, emphasising the continuation of globalization and free trade as opposed to a return to fixed exchange rates.[10] There have been tensions between Brown and Sarkozy, who argues that the "Anglo-Saxon" model of unrestrained markets has failed.[11]

Italian Economics Minister Giulio Tremonti has said that Italy will use its 2009 G7 chairmanship to push for a "New Bretton Woods." He has been critical of the U.S.'s response to the global financial crisis of 2008, and has suggested that the dollar may be superseded as the base currency of the Bretton Woods system.[12][13][14] On 20 October 2008, Tremonti told the Italian daily Corriere della Sera that proposals for a new Bretton Woods had been spread for many years by American political activist Lyndon LaRouche.[15] 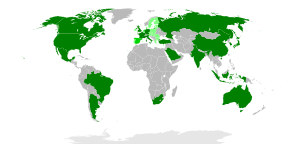 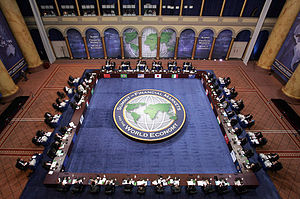 G20 leaders and delegates attend the Summit on Financial Markets and the World Economy Saturday at the National Building Museum in Washington, D.C. on November 15, 2008.

The formula is "G7 plus". In announcing the summit, US President George Bush said that the summit would bring together members of the G20. The G20 was set up to respond to the financial turmoil of 1997-99 through the development of policies that "promote international financial stability". The G20 comprises countries considered to be systemically important, but omits over 170 governments (192 governments are members of the United Nations).

The first meeting of the G20 leaders on financial markets and the world economy was held in Washington, D.C. on November 14–15, 2008, at the National Building Museum. The participants were: Argentina, Australia, Brazil, Canada, the People's Republic of China, France, Germany, India, Indonesia, Italy, Japan, Mexico, Republic of Korea, Russia, Saudi Arabia, South Africa, Turkey, the United Kingdom, the United States of America, the European Union (represented by France's President Nicolas Sarkozy as President of the European Council, as well as by José Manuel Barroso, president of the European Commission), the Netherlands (allowed extraordinary presence), Spain (allowed extraordinary presence), the World Bank, the International Monetary Fund and the Financial Stability Forum. Although Dutch Prime Minister Jan Peter Balkenende arrived at Andrews Air Force Base on the evening of November 14, he immediately returned to the Netherlands when notified of the death of his father; the Netherlands was instead represented by State Secretary Jan Kees de Jager.[16]

Spanish Prime Minister José Luis Rodríguez Zapatero was not initially invited, but was "so desperate to secure an invitation" to the summit, that he traveled "to Asia to seek the help of President Hu Jintao of China."[17] Zapatero eventually extracted an invitation through "intense lobbying" of French President Nicolas Sarkozy, who happened to hold two invitations (the second French invitation was due to the fact that France held the Presidency of the Council of the European Union during this period).[18]

The following participants of the Washington summit include the core members of the G20, which comprises 19 countries and the European Union which is represented by its two governing bodies, the European Council and the European Commission,[19] as well as other nations and regional organizations invited to take part.

Working sessions of the G20 heads of states and governments. 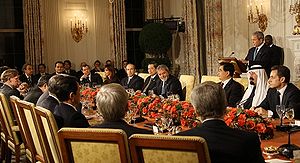 President Bush and the other summit leaders at a working dinner in the East Wing of the White House.

German Chancellor Angela Merkel and French President Nicolas Sarkozy said "Bretton Woods II" should bring about "genuine, all-encompassing reform of the international financial system".[21] The Council of the European Union sees the meeting as "tak[ing] early decisions on transparency, global standards of regulation, cross-border supervision and crisis management, to avoid conflicts of interest and to create an early warning system, so as to engender confidence among savers and investors in every country." In announcing the meeting, the spokesperson for US President George Bush said that "leaders will review progress being made to address the current financial crisis, advance a common understanding of its causes, and, in order to avoid a repetition, agree on a common set of principles for reform of the regulatory and institutional regimes for the world's financial sector". UK Prime Minister Gordon Brown, in a mid-October speech, set out several principles. These include transparency (internationally agreed accounting standards, credit insurance market standards), integrity (credit agencies, executive pay), responsibility (board member competency and expertise), sound banking practice (protecting against speculative bubbles). While addressing the G20 leaders, Chinese President Hu Jintao listed four priorities in reforming the international financial system: stepping up international cooperation in financial regulation; advancing reform of international financial institutions; encouraging regional financial cooperation; and improving the international currency system.[22] Foreign ministry spokesman Qin Gang said the agreement was "comprehensive, positive and balanced".[23] Prior to this summit, Japan's Prime Minister, Taro Aso, had contributed feasible action plan based on the analysis of the surplus of Japan's international balance of payments in spite of her prolonged economic slump to The Wall Street Journal,[24] and also provided his idea includes funding in the meeting. Eventually Japan provided the International Monetary Fund 100 billion U.S. dollar to bolster the fund during the global economic and financial crisis.[25]

The White House reported that the summit had reached what would be the Washington declaration. The five key objectives the leaders agreed upon were:

A summary of the meeting's other salient points is presented by the White House in the "Fact Sheet"[26] while the full conclusions are given in the Summit Declaration.[27]

Despite the optimism expressed by many of those present, doubts soon began to emerge about the success of the meeting and the chances of achieving all its objectives.[28]

The 2009 G20 management troika (U.K., Brazil, South Korea) is charged with coordinating the task of coming up with the content and method of implementing the 47 short and mid-term objectives by March 2009.[29]

The financial press generally welcomed the results of the summit but the Financial Times drew attention to the need for real global cooperation on the ambitious agenda[43] while The Wall Street Journal questioned whether the "regulatory crackdown on the kind of high-risk lending and investment that has led the world into a financial mess" might not backfire by causing an unwanted credit crunch.[44] Business Week listed a number of difficult fundamental questions finance ministers would now have to resolve by the end of March. These included trade tensions and protectionism, consumer spending, housing prices, a clampdown on lending practices and how to achieve global coordination.[45] The Hindu's Business Line opined that "it is all very well to speak blithely of new Bretton Woods institutions but, when there is no acceptance of a world mediated by Western ideas, the move is doomed ab initio."[46]

The UN General Assembly set up an Interactive Panel on the Global Financial Crisis which held its first meeting in New York on 30 October 2008, led by Professor Joseph Stiglitz. It covered similar ground as the G20, but involving a broader range of countries, and lobbied for an agreement involving all members of the UN.[47] The panel's work was carried forward by a Commission of Experts on Reform of the International Financial System, also led by Stiglitz.