The Universal Forum of Cultures Monterrey 2007 was an international civil-society[citation needed] event that took place in the city of Monterrey, Mexico, starting on September and ending in December of mentioned year. The Forum, as it is commonly referred to, is a global event which takes place every 4 years, in a different city each time, and seeks to reunite citizens from a varied range of cultures, languages, religions to foster inter-cultural dialogue and to promote global civil society empowerment. This massive event gathered an approximate 4 million visitors to Monterrey, and was mostly free of charge.[1]

The Universal Forum of Cultures project was born in 1996 in the city of Barcelona, Spain. The mayor of Barcelona identified that, after the 1992 Barcelona Olympic Games, there was a large number of international events that fostered competition. On the other hand, there was no event dedicated to empowering civil society or focused on the celebrations of the arts and culture. The proposal to create such an event was then presented in 1997 to UNESCO by the delegation of Spain, and unanimously approved by all member states represented in the Organization.

In 1999, UNESCO signed a cooperation agreement with the Forum Foundation, that established the Organization as the chief partner and main sponsor of the event.

In 2004, Barcelona hosted the first Universal Forum of Cultures: Barcelona 2004, which lasted 141 days and established the event as the major global gathering for arts, culture and dialogues. Upon concluding the 2004 Forum, the Forum Foundation selected the city of Monterrey, Mexico to host the 2007 Forum. Other candidate cities in the race included important venues such as Amsterdam, Montreal, Durban, and Fukuoka.

In 2005, during UNESCO's 33rd General Conference it was decided that UNESCO would again be the main partner of the Forum providing technical assistance and promotion of the Forum with international governmental and non-governmental organizations (NGO).

Main Objectives of the 2007 Forum

The main objectives of the Universal Forum of the Cultures Monterrey 2007, were the following:

The Universal Forum of Cultures Monterrey 2007 revolved around 4 Core Concepts or Axis. These 4 topics sum up the vast majority of issues and problems faced by global civil society and will remain, according to experts, the most urgent and relevant working areas for the global community. The 4 Core Concepts of the 2007 Forum were:

The existence of cultural diversity in the world is an undeniable fact. People often coexist with others who share different beliefs, traditions and customs. Forum seeks to provide knowledge of the circumstances in which others live, new ways to see the world, respect our planet, and seek social advancement. Forum allowed us to understand the particular elements which entail the richness of our modern world, and seeks to identify the differences between cultures, to promote a respectful, peaceful coexistence.

Sustainability is an issue of major transcendence in the contemporary world, which needs to find new options for economic, social, and cultural development; seeking an improved utilization of natural resources for the benefit of the planet and its inhabitants. Forum took on this sensitive topic not only from an environmental perspective, but from a wide spectrum of approaches.

Knowledge is a human construction designed to organize and convey our experiences in the world. The challenge is learning how to make the best use of it so we can achieve an effective improvement in our quality of life. This topic was proposed by the 2007 Monterrey Forum, as it was not debated in Barcelona 2004.

Paving a way for peace does not only mean preventing armed warfare. In the Universal Forum of Cultures, new dialogues on peace were instituted on all levels. Peace with ourselves and the people around us, peace with our ecosystem, and peace amongst peoples and nations. Keeping in mind at all times that there can be no peace where basic needs have not been satisfied.

Activities and Events for the 2007 Forum

The 4 Core Concepts of the Monterrey 2007 Forum were carried out in 4 separate activities programmes. These were:

The Forum Dialogues took place in the form of lectures, seminars, debates, symposium, international encounters, and other types of activities. The Dialogues were broken down into 8 continuous weeks of events, with more than 350 world level speakers and experts, and carried out in Themed Weeks. That meant, that during each particular week, all the Forum Dialogues were centered in one single topic, tackled from various angles and perspectives. There were 12 main topics, organized in 8 weeks of events.

The 8 Themed Weeks of Forum Dialogues were:

The 2007 Monterrey Forum did also present 16 grand exhibitions, that allowed the participants to experience the topics and concerns of the modern world via an interactive experience. Many of the Forum Exhibitions were planned and created only for this event. The exhibitions offered at the event were: 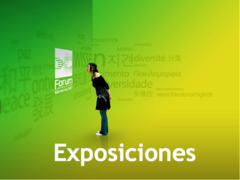 The 2007 Monterrey Forum provided the participants with the opportunity to experience a wide array of Cultural Expressions from all continents of the world. More than 1,000 single events ranging from 189 companies from more than 75 countries, were presented during the 80 days of the event. A promotional video for the Cultural Expressions offer can be viewed in the following link [2].

Some of the most relevant shows and performers that were presented during the Forum included:

The 2007 Monterrey Forum also included a series of grand events and spaces for social participation, which took place during the course of the 80-day event. These were designed to foster communal gathering and free speech, and also to provide an access area for members of the community to participate directly with the Forum, and to experience the richness that the event entailed.

Some of these Special Projects and Events included the following:

The Fundidora Park was the central venue for the 2007 Universal Forum of Cultures. However, this is not the only venue that hosted the more than 1000 activities that took place during the 80-day event. There are approximately 20 distinct venues that were located through the entire city. Some of the most relevant ones included:

The biggest firework show ever seen on Latin America was the closure to the forum, with over 1,500 kg on artificial fireworks.