For the previous twelve years Davíð Oddsson of the Independence Party had been Prime Minister of Iceland and since the 1995 election had been ruling in coalition with the Progressive Party.[3] At the last election in 1999 the two ruling parties together won 38 of the 63 seats, to maintain a majority in the Icelandic parliament.[4] 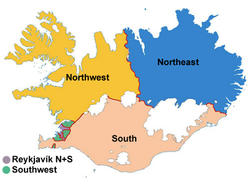 Method for apportionment of constituency seats

The available constituency seats are first distributed to each party according to the D'Hondt method, so that proportional representation is ensured within each of the constituencies. The next step is to apportion these party distributed seats to the candidates within the party having the highest "vote score", after counting both direct candidate votes and their share of party votes in the constituency. In Iceland the "candidate vote system" is that, for each constituency, each party provides a pre-ranked list of candidates beneath each party name (listed according to the preferred order decided by the party), but where the voters voting for the party can alter this pre-ranked order by renumbering the individual candidates and/or crossing out those candidates they do not like, so that such candidates will not get a share of the voter's "personal vote" for the party.[6][7]

As a restriction on the possibility of re-ranking candidates, it is however only possible to alter the first several candidates on the list. The borderline for alterations is drawn for the first three candidates if the party only win one of the total seats in the constituency, or if more than one seat is won the borderline shall be drawn at the pre-ranked number equal to two times the total number of seats being won by the party in the constituency. So if a party has won two seats in a constituency, then the voter is only allowed to re-rank the top four ranked candidates on the list, with any rank altering by voters below this line simply being ignored when subsequently calculating the candidate vote shares within each party. Final calculation of the candidate vote shares is always done according to the Borda method, where all candidates above the previously described borderline in the ranking are granted voting fraction values according to the voters noted rank. If the number of considered candidates consist of four (as in the given example), then the first ranked candidate is assigned a value of 1 (a so-called full personal vote), the next one get the value 0.75 (1/4 less), followed likewise by 0.50 and 0.25 respectively for the two last candidates. If the number of considered candidates instead had been six (due to winning 3 seats), then the first ranked candidate in a similar way would be assigned a value of 1 (a so-called full personal vote), with the following five candidates receiving respectively 5/6, 4/6, 3/6, 2/6 and 1/6. As mentioned above, crossed out names will always be allocated a 0.00 value. The accumulated total score of the candidates voting fractions, will be used in determining which candidates receive the seats won by their party. Note that candidate vote scores are not directly comparable to candidates from other parties, as how many seats are being won in a constituency by a particular party will effect how their candidates receive voting fractions (like in the above examples, where a candidate ranked number four for a party winning two seats would receive a voting fraction of 0.25, compared to 0.50 for an equally ranked candidate belonging to a party winning 3 seats)[6][7]

Method for apportionment of leveling seats

After the initial apportionment of constituency seats, all the parties that exceed the election threshold of 5% nationally will also qualify to potentially be granted the extra leveling seats, which seek to adjust the result towards seat proportionality at the national level.

The Social Democratic Alliance was the main left wing opposition party and their leader, Ingibjörg Sólrún Gísladóttir, a former mayor of Reykjavík, was hoping to become the first female Prime Minister of Iceland.[4] They were hoping to capitalise on a feeling that it was time for a change in government.[8] The Social Democrats stressed welfare, health and housing which they said the Independence Party had failed to address.[9]

The Independence Party campaigned on their record of economic growth over the past decade.[10] This had seen Icelandic businesses expand abroad and Iceland become the 6th richest county per capita in purchasing power parity.[11]

Opinion polls as the election neared showed the Independence Party with about 34-35% support and with a small lead over the Social Democratic Alliance which was getting 27-33% support.[3]

The Independence Party maintained a narrow lead over the opposition Social Democratic Alliance.[12] However this was their worst election result since the 1987 election, as their vote dropped from 40.7% in the previous election to only 33.7%.[13] The Social Democrats gained three seats; however their leader, Ingibjörg Sólrún Gísladóttir, was not elected,[14] as she had only placed herself 5th on the list of candidates for her district.[14]