The 2003 European heat wave led to the hottest summer on record in Europe since at least 1540.[2] France was hit especially hard. The heat wave led to health crises in several countries and combined with drought to create a crop shortfall in parts of Southern Europe. Peer-reviewed analysis places the European death toll at more than 70,000.[3]

The predominant heat was recorded in July and August, partly a result of the western European seasonal lag from the maritime influence of the Atlantic warm waters in combination with hot continental air and strong southerly winds. 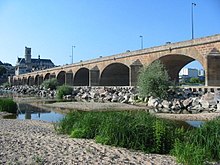 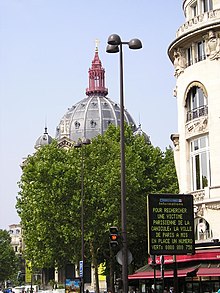 Public sign in Paris that reads: "To find a Parisian victim of the heat wave, the city of Paris has put a green number in place: ...".

In France, 14,802 heat-related deaths (mostly among the elderly) occurred during the heat wave, according to the French National Institute of Health.[4][5] France does not commonly have very hot summers, particularly in the northern areas,[6] but eight consecutive days with temperatures of more than 40 °C (104 °F) were recorded in Auxerre, Yonne in early August 2003.[7] Because of the usually relatively mild summers, most people did not know how to react to very high temperatures (for instance, with respect to rehydration), and most single-family homes and residential facilities built in the last 50 years were not equipped with air conditioning. Furthermore, while contingency plans were made for a variety of natural and man-made catastrophes, high temperatures had rarely been considered a major hazard.

The catastrophe occurred in August, a month in which many people, including government ministers and physicians, are on holiday. Many bodies were not claimed for many weeks because relatives were on holiday. A refrigerated warehouse outside Paris was used by undertakers as they did not have enough space in their own facilities. On 3 September 2003, 57 bodies were still left unclaimed in the Paris area, and were buried.[8]

The high number of deaths can be explained by the conjunction of seemingly unrelated events. Most nights in France are cool, even in summer. As a consequence, houses (usually of stone, concrete, or brick construction) do not warm too much during the daytime and radiate minimal heat at night, and air conditioning is usually unnecessary. During the heat wave, temperatures remained at record highs even at night, breaking the usual cooling cycle. Elderly persons living by themselves had never faced such extreme heat before and did not know how to react or were too mentally or physically impaired by the heat to make the necessary adaptations themselves. Elderly persons with family support or those residing in nursing homes were more likely to have others who could make the adjustments for them. This led to statistically improbable survival rates with the weakest group having fewer deaths than more physically fit persons; most of the heat victims came from the group of elderly persons not requiring constant medical care, and/or those living alone, without frequent contact with immediate family.[citation needed]

That shortcomings of the nation's health system could allow such a death toll is a controversy in France. The administration of President Jacques Chirac and Prime Minister Jean-Pierre Raffarin laid the blame on families who had left their elderly behind without caring for them, the 35-hour workweek, which affected the amount of time doctors could work, and family practitioners vacationing in August. Many companies traditionally closed in August, so people had no choice about when to vacation. Family doctors were still in the habit of vacationing at the same time. It is not clear that more physicians would have helped, as the main limitation was not the health system, but locating old people needing assistance.[citation needed]

The opposition, as well as many of the editorials of the French local press, have blamed the administration. Many blamed Health Minister Jean-François Mattei for failing to return from his vacation when the heat wave became serious, and his aides for blocking emergency measures in public hospitals (such as the recalling of physicians). A particularly vocal critic was Dr. Patrick Pelloux, head of the union of emergency physicians, who blamed the Raffarin administration for ignoring warnings from health and emergency professionals and trying to minimize the crisis. Mattei lost his ministerial post in a cabinet reshuffle on 31 March 2004.[citation needed]

Not everyone blamed the government. "The French family structure is more dislocated than elsewhere in Europe, and prevailing social attitudes hold that once older people are closed behind their apartment doors or in nursing homes, they are someone else's problem," said Stéphane Mantion, an official with the French Red Cross. "These thousands of elderly victims didn't die from a heat wave as such, but from the isolation and insufficient assistance they lived with day in and out, and which almost any crisis situation could render fatal."[9]

Moreover, the French episode of heat wave in 2003 shows how heat wave dangers result from the intricate association of natural and social factors. Although research established that heat waves represent a major threat for public health, France had no policy in place. Until the 2003 event, heat waves were a strongly underestimated risk in the French context, which partly explains the high number of victims.[10]

Below are stats for the month of August 2003 in France.

About 1,500[5][15] heat-related deaths occurred in the Netherlands, again largely the elderly. The heat wave broke no records,[citation needed] although four tropical weather-designated days in mid-July, preceding the official wave, are not counted due to a cool day in between and the nature of the Netherlands specification/definition of a heat wave.[15] The highest temperature recorded this heatwave was on 7 August, when in Arcen, in Limburg, a temperature of 37.8 °C (100.0 °F) was reached, 0.8 °C below the national record (since 1904). A higher temperature had only been recorded twice before. On 8 August, a temperature of 37.7 °C (99.9 °F) was recorded, and 12 August had a temperature of 37.2 °C (99.0 °F).[16]

Initially, 141 deaths were attributed to the heat wave in Spain.[17] A further research of INE estimated a 12,963 excess of deaths during summer of 2003.[17] Temperature records were broken in various cities, with the heat wave being more felt in typically cooler northern Spain.

Record temperatures were felt in:

In Germany, shipping could not navigate the Elbe or Danube, as a result of low water levels. Around 300 people—mostly elderly—died during the 2003 heatwave in Germany.[5]

Melting glaciers in the Alps caused avalanches and flash floods in Switzerland. A new nationwide record temperature of 41.5 °C (106.7 °F) was recorded in Grono, Graubünden.[27] 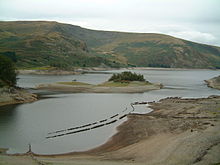 The United Kingdom experienced one of its hottest summers on record with temperatures well above average. However, Atlantic cyclones brought cool and wet weather for a short while at the end of July and beginning of August before the temperatures started to increase substantially from 3 August onwards. Several weather records were broken in the United Kingdom, including a new record for the country's highest ever recorded temperature of 38.5 °C (101.3 °F) at Faversham in Kent on 10 August, which remained the highest recorded temperature in the UK until the heatwave in July 2019. This was the first occasion on which temperatures exceeding 100 °F (38 °C) have ever been officially recorded in the UK.[28] Scotland also broke its highest temperature record with 32.9 °C (91.2 °F) recorded in Greycrook in the Scottish borders on 9 August.

Due to a number of deaths, the UK government released its Heat Health Watch system, issuing warnings if temperatures rise above 30 °C in the day and 15 °C at night.[29] According to the BBC, over 2,000 people more than usual may have died in the United Kingdom during the 2003 heatwave.[30]

The tarmac melted on part of the M25 between Junctions 26 and 27,[31] and rails buckled from expansion on the hottest day in England in 13 years, while 2 teenaged boys drowned while trying to escape the excessive heat.[32]

The summer of 2003 was warmer than average in Ireland, but the heat was far less pronounced there than in the rest of Europe. August was by far the warmest, sunniest, and driest month, with temperatures roughly 2 °C above average. The highest temperature recorded was 30.3 °C (86.5 °F) at Belderrig, County Mayo on 8 August.[33][34][35]

Remarkably, Scandinavia saw a cooler August in 2003 than the previous year when comparative temperatures were very high for the latitude, as the hot air parked over continental Europe. Only the deep southern Sweden saw any type of heatwave effect in the country, with the average high of Lund for August being 23.9 °C (75.0 °F), which is a very warm temperature average for August.[36] In spite of this the Scania County stayed below extremes of 30 °C (86 °F) indicating a more subtle kind of heat. The records from 1997 and 2002 held up all throughout the country, and the warmest temperature was 30.8 °C (87.4 °F) in Stockholm on 1 August, which was higher than the warmest Irish temperature. Although a comparatively low exposure to the heatwave this is to be expected given the greater continental influence. When compared with the 1961–1990 averages the 2003 August month was still a couple of degrees warmer than a normal August in the southern third of the country.

The bulk of the heat wave in Sweden was instead seen earlier in July in the central and northerly parts of the country, where Stockholm had a July mean of 20.2 °C (68.4 °F) with a high of 25.4 °C (77.7 °F) which although very warm was not record-setting.[37] The warmest summer temperature was set on 17 July in the northern city of Piteå with 32.8 °C (91.0 °F), which although it is very hot for such a northerly coastal location, was largely unrelated to the latter central European intense heat wave. In northern Sweden, August temperatures are rarely warm due to the decreased exposure of the low but everlasting sun during the summer solstice. As a result, temperatures there peak in July if it is a warm summer.

Crops in Southern Europe suffered the most from drought.

These shortfalls in wheat harvest occurred as a result of the long drought.[citation needed]

Many other countries had shortfalls of 5–10%, and the EU total production was down by 10 million tonnes, or 10%.[citation needed]

The heatwave greatly accelerated the ripening of grapes; also, the heat dehydrated the grapes, making for more concentrated juice. By mid-August, the grapes in certain vineyards had already reached their optimal sugar content, possibly resulting in 12.0°–12.5° wines (see alcoholic degree). Because of that, and also of the impending change to rainy weather, the harvest was started much earlier than usual (e.g. in mid-August for areas that are normally harvested in September).

The wines from 2003, although in scarce quantity, are predicted to have exceptional quality, especially in France. The heatwave made Hungary fare extremely well in the Vinalies 2003 International wine contest: a total of nine gold and nine silver medals were awarded to Hungarian winemakers.[38]

Effects on the sea

The anomalous overheating affecting the atmosphere also created anomalies on sea surface stratification in the Mediterranean Sea and on the surface currents, as well. A seasonal current of the central Mediterranean Sea, the Atlantic Ionian Stream (AIS), was affected by the warm temperatures, resulting in modifications in its path and intensity. The AIS is important for the reproduction biology of important pelagic commercial fish species, so the heatwave may have influenced indirectly the stocks of these species.[39]