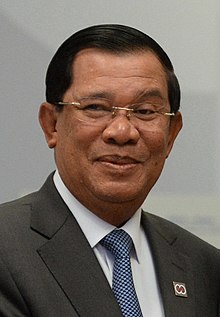 The 1997 Cambodian coup (Khmer: រដ្ឋប្រហារឆ្នាំ ១៩៩៧) took place in Cambodia in July to September 1997. As a result, co-premier Hun Sen ousted the other co-premier Norodom Ranariddh. Dozens of people were killed during the conflict.

On March 16, 1992, the UN Transitional Authority in Cambodia (UNTAC), under UNSYG Special Representative Yasushi Akashi and Lt. General John Sanderson, arrived in Cambodia to begin implementation of the UN Settlement Plan, that was concluded as a result of the Paris Peace Accords of 1991. Free elections were held in 1993.

The Khmer Rouge or Party of Democratic Kampuchea (PDK), whose forces were never actually disarmed or demobilized, barred some people from participating in 1993 elections in the 10-15 percent of the country (holding six percent of the population) it then controlled. Altogether, over four million Cambodians (about 90% of eligible voters) participated in that May election.

Prince Norodom Ranariddh's royalist FUNCINPEC Party was the top vote recipient with 45.5% vote, followed by Hun Sen's Cambodian People's Party (ex-communist) and the Buddhist Liberal Democratic Party (of Son Sann), respectively. Despite the victory, the FUNCINPEC had to enter into coalition talks with the Cambodian People's Party, led by Hun Sen, who refused to relinquish power.[7]

In 1997, long tensions between the two governing parties broke into factional fighting between FUNCINPEC supporters of Prince Norodom Ranariddh and of Hun Sen, resulting in a number of casualties. This event was generally treated by the press, as well as by some scholars, as a "bloody coup by strongman Hun Sen",[8] without much serious and neutral investigation into its causes and its development.[9] Among the very few who attempted to look at evidence from both sides at the time were Australian ambassador to Cambodia Tony Kevin,[10] and journalist Barry Wain, who wrote, "in circumstances that remain disputed, Mr. Hun Sen's military forces... defeated Prince Ranariddh's troops in Phnom Penh".[11]

Thomas Hammarberg, the United Nations Special Representative on Human rights in Cambodia, made it clear in his October 1997 report to the UN General Assembly: the events of July 5–6 were a "coup d'état."[7] In retrospect, the following issues have been identified as the causes of the violent events: the 'dual power' accorded by the 1993 power sharing formula allowed the CPP to retain control over power structures; while officially a ruling party, the FUNCINPEC concluded an alliance – National United Front – with the opposition Sam Rainsy Party;[10] the opposite sides accused each other of trying to integrate former Khmer Rouge fighters, who had been/were defecting.

Thus, Hun Sen alleged that Ranariddh had been planning a take-over with the help of Khmer Rouge fighters, supposedly smuggled into the capital (on the other hand, Hun Sen's army included a number of ex-Khmer Rouge fighters as well).[12]

After the royalist resistance was crushed in Phnom Penh, there was indeed some joint resistance by FUCINPEC-Khmer Rouge forces in the Northern provinces, where the fighting against Hun Sen's offensive lasted until September 1997.[1][19]

Following the seizure of power by Hun Sen, Prince Ranariddh went into exile in Paris. Some FUNCINPEC leaders were forced to flee the country, many were shot and Ung Huot was elected as the new First Prime Minister.

FUNCINPEC leaders returned to Cambodia shortly before the 1998 National Assembly elections. In those elections, the CPP received 41% of the vote, FUNCINPEC 32%, and the Sam Rainsy Party (SRP) 13%. Many international observers judged the elections to have been seriously flawed, claiming political violence, intimidation, and lack of media access. The CPP and FUNCINPEC formed another coalition government, with CPP the senior partner.