General elections were held in Italy on 5 and 6 April 1992 to select the Eleventh Republican Parliament.[1] They were the first without the traditionally second most important political force in Italian politics, the Italian Communist Party (PCI), which had been disbanded in 1991. Most of its members split between the more democratic-socialist oriented Democratic Party of the Left (PDS), while a minority who did not want to renounce the communist tradition became the Communist Refoundation Party (PRC). However, between them they gained around 4% less than what the already declining PCI had obtained in the 1987 Italian general election, despite PRC absorbing the disbanded Proletarian Democracy (DP).

The other major feature was the sudden rise of the federalist Northern League, which increased its vote from 0.5% of the preceding elections to more than 8%, increasing from a single member both in the Chamber and the Senate to 55 and 25, respectively. The long wave ("onda lunga") of Bettino Craxi's now centrist-oriented Italian Socialist Party, which in the past elections had been forecast next to overcome PCI, seemed to stop. Christian Democracy and the other traditional government parties, with the exception of the Republicans and the Liberals, also experienced a slight decrease in their vote.

The pure party-list proportional representation had traditionally become the electoral system for the Chamber of Deputies. Italian provinces were united in 32 constituencies, each electing a group of candidates. At constituency level, seats were divided between open lists using the largest remainder method with Imperiali quota. The remaining votes and seats were transferred at national level, where they were divided using the Hare quota, and automatically distributed to best losers into the local lists.

In 1991 the Italian Communist Party split into the Democratic Party of the Left (PDS), led by Achille Occhetto, and the Communist Refoundation Party (PRC), headed by Armando Cossutta. Occhetto, leader of the PCI since 1988, stunned the party faithfully assembled in a working-class section of Bologna with a speech heralding the end of communism, a move now referred to in Italian politics as the svolta della Bolognina (Bolognina turning point). The collapse of the communist governments in the Soviet Union and Eastern Europe had convinced Occhetto that the era of Eurocommunism was over, and he transformed the PCI into a progressive left-wing party, the PDS. A third of the PCI's former members, led by Cossutta, refused to join the PDS, and instead founded the Communist Refoundation Party.[2]

On 17 February 1992, judge Antonio Di Pietro had Mario Chiesa, a member of the Italian Socialist Party (PSI), arrested for accepting a bribe from a Milan cleaning firm. The Italian Socialist Party distanced themselves from Chiesa. Bettino Craxi called Mario Chiesa mariuolo, or "villain", a "wild splinter" of the otherwise clean PSI. Upset over this treatment by his former colleagues, Chiesa began to give information about corruption implicating his colleagues. This marked the beginning of the Mani pulite investigation; news of political corruption began spreading in the press.

Umberto Bossi at the first Northern League rally in Pontida, 1990.

The League exploited resentment against Rome's centralism (with the famous slogan Roma ladrona, which loosely means "Rome big thief") and the Italian government, common in northern Italy as many northerners felt that the government wasted resources collected mostly from northerners' taxes.[6] Cultural influences from bordering countries in the North and resentment against illegal immigrants were also exploited. The party's electoral successes began roughly at a time when public disillusionment with the established political parties was at its height. The Tangentopoli corruption scandals, which invested most of the established parties, were unveiled from 1992 on.[4][5] However, contrarily to what many pundits observed at the beginning of the 1990s, LN became a stable political force and it is by far the oldest party among those represented in the Italian Parliament.

The Northern League's first electoral breakthrough was at the 1990 regional elections, but it was with the 1992 general election that the party emerged as a leading political actor. Having gained 8.7% of the vote, 56 deputies and 26 senators,[7] it became the fourth largest party of the country and within Parliament. 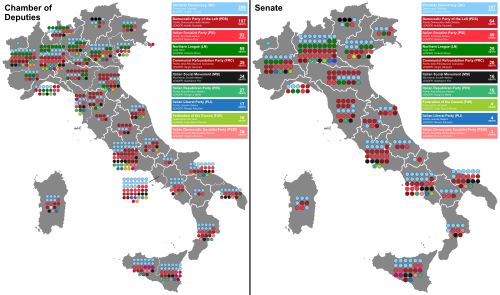 Christian Democracy (DC) suffered a significant swing against it, but the coalition it had led prior to the elections managed to retain a small majority. Opposition parties won a significant amount of support. However, the largest opposition party, the Italian Communist Party, had suffered an internal crisis after the fall of the Soviet Union, with the bulk of the party reforming into the Democratic Party of the Left (PDS) and a minority forming the Communist Refoundation Party (PRC). Collectively, they suffered a 4% swing against them, with the PDS losing a third of its seats compared to 1987. As such, the opposition was divided. The biggest winner of the election was the Northern League, which was not inclined to alliances at the time due to its separatist leanings.

The resulting parliament was therefore weak and difficult to bring to an agreement, and lasted only two years before new elections were held in 1994. This was accelerated by the mani pulite scandal, which began shortly before the election and expanded in scope throughout 1992 and 1993. The scandal implicated vast sections of almost every major political party in Italy in extensive corruption. This had catastrophic consequences for the political landscape as the governing parties became extremely unpopular.

The 1992-1994 parliamentary term also saw the first major change to the Italian electoral system since the late 1940s, with a 1993 referendum abolishing the clause of the electoral law which required candidates to win two-thirds of votes to be elected in the Senate's single-member districts. This essentially transformed the Senate electoral law from de facto pure proportional representation to a majoritarian additional member system. Parliament subsequently passed a new electoral law establishing a similar system for the Chamber of Deputies.