Enlarge ISBN (identifier) Boxing at the 1980 Summer Olympics
Games of the XXII Olympiad, held in Moscow in 1980

Eighty nations were represented at the Moscow Games – the smallest number since 1956. Led by the United States, 66 countries boycotted the games entirely because of the Soviet–Afghan War. Some athletes from some of the boycotting countries (they are not included in the list of 66 countries that boycotted the games entirely) participated in the games under the Olympic Flag.[5] The Soviet Union would later boycott the 1984 Summer Olympics. The Soviet Union won the most gold and overall medals, with the USSR and East Germany winning 127 out of 203 available golds.

A Soviet stamp sheet showing the logo of the games (left) and its mascot Misha (right) holding the 1980 Olympic light. The map shows the torch relay route running from Olympia, Greece, the site of the ancient Olympic Games to Moscow, Russian SFSR. It also depicts the number of gold, silver and bronze medals (80, 69, 46) won by the Soviet athletes at the Games.

The only two cities to bid for the 1980 Summer Olympics were Moscow and Los Angeles. The choice between them was made on 23 October 1974 in the 75th IOC Session in Vienna, Austria. Los Angeles would eventually host the 1984 Summer Olympics.[6] 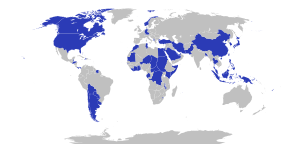 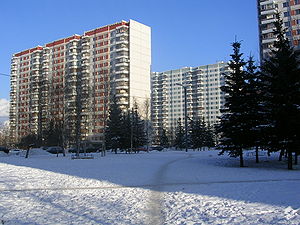 Eighty nations were represented at the Moscow Games – the smallest number since 1956. Of the eighty participating nations,[7] seven nations made their first appearance at this Games – Angola, Botswana, Cyprus, Jordan, Laos, Mozambique and Seychelles.[8] None of these nations won a medal.

Although approximately half of the 24 countries that boycotted the 1976 Summer Olympics (in protest against the IOC not expelling New Zealand who sanctioned a rugby tour of apartheid South Africa) participated in the Moscow Games, the 1980 Summer Olympics were disrupted by another, even larger, boycott led by the United States in protest at the 1979 Soviet–Afghan War. The Soviet invasion spurred Jimmy Carter to issue an ultimatum on 20 January 1980, that the US would boycott the Moscow Olympics if Soviet troops did not withdraw from Afghanistan within one month.[9] 65 countries and regions invited did not take part in the 1980 Olympics. Many of these followed the United States' boycott initiative, while others[who?] cited economic reasons for not going.[9][10] Iran, under Ayatollah Khomeini hostile to both superpowers, boycotted when the Islamic Conference condemned the invasion.[11]

Many of the boycotting nations participated instead in the Liberty Bell Classic, also known as the "Olympic Boycott Games", in Philadelphia. However, the nations that did compete had won 71 percent of all medals, and similarly 71 percent of the gold medals, at the 1976 Summer Olympics in Montreal. This was in part because of state-run doping programs that had been developed in the Eastern Bloc countries.[12] As a form of protest against the Soviet intervention in Afghanistan, fifteen countries marched in the Opening Ceremony with the Olympic Flag instead of their national flags, and the Olympic Flag and Olympic Hymn were used at medal ceremonies when athletes from these countries won medals. Competitors from three countries – New Zealand,[13] Portugal, and Spain – competed under the flags of their respective National Olympic Committees. Some of these teams that marched under flags other than their national flags were depleted by boycotts by individual athletes, while some athletes did not participate in the march.[citation needed]

The impact of the boycott was mixed. Some events, such as swimming, track and field, boxing, basketball, diving, field hockey and equestrian sports, were hard hit. Whilst competitors from 36 countries became Olympic medalists, the great majority of the medals were taken by the host country and East Germany in what was the most skewed medal tally since 1904.[14]

There were 203 events – more than at any previous Olympics.

A 1989 report by a committee of the Australian Senate claimed that "there is hardly a medal winner at the Moscow Games, certainly not a gold medal winner...who is not on one sort of drug or another: usually several kinds. The Moscow Games might well have been called the Chemists' Games".[15]

A member of the IOC Medical Commission, Manfred Donike, privately ran additional tests with a new technique for identifying abnormal levels of testosterone by measuring its ratio to epitestosterone in urine. Twenty percent of the specimens he tested, including those from sixteen gold medalists would have resulted in disciplinary proceedings had the tests been official. The results of Donike's unofficial tests later convinced the IOC to add his new technique to their testing protocols.[16] The first documented case of "blood doping" occurred at the 1980 Summer Olympics as a runner was transfused with two pints of blood before winning medals in the 5000 m and 10,000 m.[17]

Major broadcasters of the Games were USSR State TV and Radio (1,370 accreditation cards), Eurovision (31 countries, 818 cards) and Intervision (11 countries, 342 cards).[18] TV Asahi with 68 cards provided coverage for Japan, while OTI representing Latin America received 59 cards and the Seven Network provided coverage for Australia (48 cards).[18] NBC, which had intended to be another major broadcaster, canceled its coverage in response to the U.S. boycott of the 1980 Summer Olympics, and became a minor broadcaster with 56 accreditation cards,[18] although the network did air highlights and recaps of the games on a regular basis. (ABC aired scenes of the opening ceremony during its Nightline program, and promised highlights each night, but the next night, the show announced that they could not air any highlights as NBC still had exclusive broadcast rights in the USA). The Canadian Broadcasting Corporation almost canceled their plans for coverage after Canada took part in the boycott and was represented by nine cards.[18] The television center used 20 television channels, compared to 16 for the Montreal Games, 12 for the Munich Games, and seven for the Mexico City Games. This was also the first time North Korea was watching, as KCTV (Korea Central Television) broadcast it as their first satellite program.

During the opening ceremony, Salyut 6 crew Leonid Popov and Valery Ryumin sent their greetings to the Olympians and wished them happy starts in the live communication between the station and the Central Lenin Stadium. They appeared on the stadium's scoreboard and their voices were translated via loud speakers.[19] 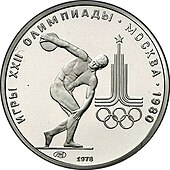 The Games attracted five million spectators, an increase of 1.5 million from the Montreal Games. There were 1,245 referees from 78 countries.[citation needed] A series of commemorative coins was released in the USSR in 1977–1980 to commemorate the event. It consisted of five platinum coins, six gold coins, 28 silver coins and six copper-nickel coins.[citation needed]

The Oxford Olympics Study established the outturn cost of the Moscow 1980 Summer Olympics at US$6.3 billion in 2015 dollars.[21] This includes sports-related costs only, that is, (i) operational costs incurred by the organizing committee for the purpose of staging the Games, e.g., expenditures for technology, transportation, workforce, administration, security, catering, ceremonies, and medical services, and (ii) direct capital costs incurred by the host city and country or private investors to build, e.g., the competition venues, the Olympic village, international broadcast center, and media and press center, which are required to host the Games. Indirect capital costs are not included, such as for road, rail, or airport infrastructure, or for hotel upgrades or other business investment incurred in preparation for the Games but not directly related to staging the Games. The cost for Moscow 1980 compares with costs of US$4.6 billion for Rio 2016 (projected), US$40–44 billion for Beijing 2008 and US$51 billion for Sochi 2014, the most expensive Olympics in history. Average cost for the Summer Games since 1960 is US$5.2 billion.

Highlights of the different events 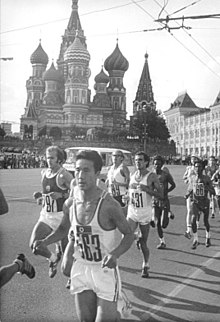 All events in canoeing and rowing took place at the Moscow Canoeing and Rowing Basin in Krylatskoye
Main article: Canoeing at the 1980 Summer Olympics 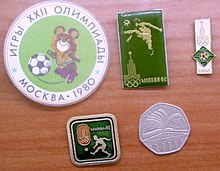 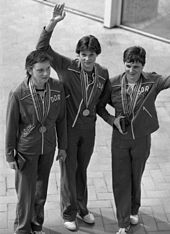 Rica Reinisch with her gold medal in 200 m swimming.

Misha, the mascot, formed in a mosaic at the moment when a tear runs down his face during the iconic scene part of the closing ceremony. 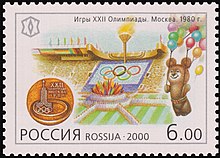 One of the most memorable moments of the closing ceremony: Misha carried by balloons into the sky, commemorated by a 2000 postage stamp issued by Russia

Because of the U.S. boycott, changes were made to the traditional elements of the closing ceremony that represent the handover to the host city of the next Summer Olympics in Los Angeles. Among them, the flag of the city of Los Angeles instead of the United States flag was raised, and the Olympic Anthem instead of the national anthem of the United States was played. There was also no "Antwerp Ceremony", where the ceremonial Olympic flag was transferred from the Mayor of Moscow to the Mayor of Los Angeles; instead the flag was kept by the Moscow city authorities until 1984. Furthermore, there was no next host city presentation.

Both the opening and closing ceremonies were shown in Yuri Ozerov's 1981 film Oh, Sport – You Are the World! (Russian: О спорт, ты – мир!).

The 1980 Summer Olympic programme featured 203 events in the following 21 sports:

All times are in Moscow Time (UTC+3)

This is a list of all nations that won medals at the 1980 Games. 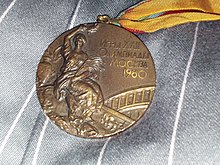 A "bronze" medal – actually tombac – from the 1980 Summer Olympics

In the following list, the number in parentheses indicates the number of athletes from each nation that competed in Moscow. Nations in italics competed under the Olympic flag (or, in the cases of New Zealand, Portugal and Spain, under the flags of their respective National Olympic Committees):

Number of athletes sent per nation