The 1973 World Rally Championship was the inaugural season for the Fédération Internationale de l'Automobile (FIA) World Rally Championship (WRC) format. It consisted of 13 events, each held in a different country of the world. Many of the events would be staples of the series through to today, including Monte Carlo, Sweden, Tour de Corse, and the RAC Rally, while others would soon be replaced in the schedule. As with following seasons, gravel events formed the majority of the schedule. Two pure tarmac and one snow and ice rally were also included, as well as three events held on a mixture of soft and hard surface roads.

From 1973 to 1978, the WRC only awarded a season championship for the winning manufacturer. Scoring was given for the highest placing entry for each manufacturer. Thus if a particular manufacturer was to place 2nd, 4th, and 10th, they would receive points for 2nd place only. However, the manufacturer would still gain an advantage in scoring from its other entries, as the points for the 4th and 10th place entries would be denied to other manufacturers. 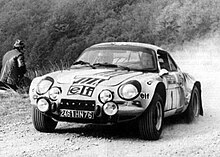 Alpine-Renault won the championship with the A110

For the first ever World Rally Championship, there were thirteen rallies.