The 1958 Lebanon crisis was a Lebanese political crisis caused by political and religious[citation needed] tensions in the country that included a United States military intervention. The intervention lasted for around three months until President Camille Chamoun, who had requested the assistance, completed his term as president of Lebanon. American and Lebanese government forces successfully occupied the Port of Beirut and Beirut International Airport. With the crisis over, the United States withdrew.

In July 1958, Lebanon was threatened by a civil war between Maronite Christians and Muslims. Tensions with Egypt had escalated earlier in 1956 when pro-Western Christian President Camille Chamoun did not break diplomatic relations with the Western powers that attacked Egypt during the Suez Crisis, angering Egyptian President Gamal Abdel Nasser.

The tensions were further increased when Chamoun showed closeness to the Baghdad Pact. Nasser felt that the pro-Western Baghdad Pact posed a threat to Arab nationalism. As a response, Egypt and Syria united into the United Arab Republic (UAR). Lebanese Sunni Prime Minister Rashid Karami supported Nasser in 1956 and 1958.

The toppling of a pro-Western government in Iraq's 14 July Revolution, along with the internal instability, caused Chamoun to call for American assistance.

U.S. Marines on patrol in Beirut

US President Dwight D. Eisenhower responded by authorizing Operation Blue Bat on July 15, 1958 in the first application of the Eisenhower Doctrine in which the US announced that it would intervene to protect regimes that it considered to be threatened by international communism. The goal of the operation was to bolster Chamoun's pro-Western Lebanese government from internal opposition and threats from Syria and Egypt. The plan was to occupy and secure Beirut International Airport, a few miles south of the city, and then to secure the port of Beirut and the approaches to the city.

The chain of command for Operation Blue Bat was as follows: the Eisenhower administration at the strategic level; Specified Command, Middle East (SPECCOMME, a 'double-hat' for Commander in Chief, U.S. Naval Forces, Eastern Atlantic and Mediterranean) at the operational level; the Sixth Fleet, with aircraft carriers USS Saratoga, USS Essex, and USS Wasp, cruisers USS Des Moines and USS Boston, and two destroyer squadrons, including the USS Leary DDR 879, USS Vesole DDR 878, and the USS Wood DD 750. At the end of June, Essex and Boston were anchored at Piraeus, Greece, while Des Moines, from which Vice Admiral Charles R. Brown was flying his flag, was at Villefranche-sur-Mer.[1] Land forces included the 2nd Provisional Marine Force (Task Force 62) and the Army Task Force 201 at the tactical level.[2] Each of these three components influenced Operations Plan 215-58 and its execution. 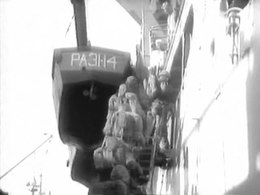 Play media
Eisenhower in a newsreel on Lebanon

The operation involved more than 14,000 men, including 8,509 US Army personnel, a contingent from the 1st Airborne Battle Group, 187th Infantry from the 24th Infantry Division and 5,670 officers and men of the United States Marine Corps (the 2nd Provisional Marine Force, of Battalion Landing Teams 1/8 and 2/2 under Brigadier General Sidney S. Wade). The 2nd Battalion, 8th Marines arrived on July 16 after a 54-hour airlift from Cherry Point, North Carolina [3] They were supported by a fleet of 70 ships and 40,000 sailors.[4] On July 16, 1958, Admiral James L. Holloway Jr., CINCNELM and CINCSPECCOMME, flew in from London to Beirut airport and boarded USS Taconic from which he commanded the remainder of the operation.[5] The U.S. withdrew its forces on October 25, 1958.

Eisenhower sent the diplomat Robert Daniel Murphy to Lebanon as his personal representative. Murphy played a significant role in convincing both sides of the conflict to reach a compromise by electing the moderate Christian general Fuad Chehab as incoming president but allowing Chamoun to continue in power until the end of his term, on September 22.

Lebanese Prime Minister Rashid Karami formed a national reconciliation government after the end of the 1958 crisis.