General elections were held in Italy on Sunday 18 April 1948 to elect the first Parliament of the Italian Republic.[1] The elections were characterised by campaign financial and propaganda efforts conducted by the United States and Great Britain on behalf of the coalition led by the Christian Democracy party (Italian: Democrazia Cristiana, DC). The Soviet Union intervened by closely controlling the Communist Party of Italy, which led a coalition of its own.

After the communist takeover of Czechoslovakia in February 1948, the US became alarmed about Soviet intentions and feared that, if the leftist coalition were to win the elections, the communist left would draw Italy into the Soviet Union's sphere of influence. As the last month of the election campaign began, the Time magazine pronounced the possible leftist victory to be "the brink of catastrophe".[2]

On election day the parties on the left lost seats while those in the right gained. The winner by a comfortable margin by the DC coalition, defeating the left-wing coalition of the Popular Democratic Front (Italian: Fronte Democratico Popolare per la libertà, la pace, il lavoro, FDP) that comprised the Italian Communist Party (Italian: Partito Comunista Italiano, PCI) and the Italian Socialist Party (Italian: Partito Socialista Italiano, PSI), on its part funded by the USSR.[3] The Christian Democrats went on to form a government without the Communists, who had been expelled from the government coalition in 1947 and remained frozen out.

The pure party-list proportional representation chosen two years before for the election of the Constituent Assembly, was definitely adopted for the Chamber of Deputies. Italian provinces were divided into 31 constituencies, each electing a group of candidates.[4] In each constituency, seats were divided between open lists using the largest remainder method with the Imperiali quota. Remaining votes and seats transferred to the national level, where special closed lists of national leaders received the last seats using the Hare quota.

For the Senate, 237 single-seat constituencies were created. The candidates needed a two-thirds majority to be elected, but only 15 aspiring senators were elected this way. All remaining votes and seats were grouped in party lists and regional constituencies, where the D'Hondt method was used: Inside the lists, candidates with the best percentages were elected.

This electoral system became standard in Italy, and was used until 1993.

The elections remain unmatched in verbal aggression and fanaticism in Italy's period of democracy. According to the historian Gianni Corbi the 1948 election was "the most passionate, the most important, the longest, the dirtiest, and the most uncertain electoral campaign in Italian history".[5] The election was between two competing visions of the future of Italian society. On the right, a Roman Catholic, conservative and capitalist Italy, linked to the United States and Britain and represented by the governing Christian Democrats of De Gasperi. On the left a secular, revolutionary and socialist society, linked to the Soviet Union and represented by the Communist Party (PCI) and its Socialist ally.[5]

The Christian Democrat campaign pointed to the recent Communist coup in Czechoslovakia. It warned that in communist countries, "children send parents to jail", "children are owned by the state", and told voters that disaster would strike Italy if the communists were to take power.[6][7] Another slogan was "In the secrecy of the polling booth, God sees you - Stalin doesn't."[8]

The Popular Front campaign focused on living standards and avoided embarrassing questions of foreign policy, such as UN membership (vetoed by the USSR) and Yugoslav control of Trieste, or losing American financial and food aid. The PCI led the FDP coalition and had effectively marginalised the PSI, which thus eventually suffered because in the elections, in terms of parliamentary seats and political power;[9] The Socialists also had been hurt by the secession of a social-democratic faction led by Giuseppe Saragat, which contested the election with the concurrent list of Socialist Unity.

The PCI had difficulties in restraining its more militant members, who, in the period immediately after the war, had engaged in violent acts of reprisals. The areas affected by the violence (the so-called "Red Triangle" of Emilia, or parts of Liguria around Genoa and Savona, for instance) had previously seen episodes of brutality committed by the Fascists during Benito Mussolini's regime and the Italian Resistance during the Allied advance through Italy.

The 1948 general election was greatly influenced by the Cold War that was underway with the Soviet Union against United States and Britain.[10] After his defeat in the election communist leader Togliatti stated on April 22 that, "The elections were not free....Brutal foreign intervention was used consisting of a threat to starve the country by withholding ERP aid if it voted for the Democratic Front... The menace to use the atom bomb against towns or regions" that voted pro-communist. [11] The US government's Voice of America radio began broadcasting anti-communist campaign pleased Italy on March 24, 1948.[12] The US Central Intelligence Agency, by its own admission, gave $1 million to Italian "center parties".[13] and was accused of publishing forged letters in order to discredit the leaders of the Italian Communist Party.[14] The National Security Act of 1947, that made foreign covert operations possible, had been signed into law about six months earlier by the American President Harry S. Truman. 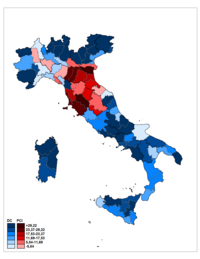 "We had bags of money that we delivered to selected politicians, to defray their political expenses, their campaign expenses, for posters, for pamphlets," according to CIA operative F. Mark Wyatt.[15]

In order to influence the election, the US agencies undertook a campaign of writing ten million letters, made numerous short-wave radio broadcasts and funded the publishing of books and articles, all of which warned the Italians of what was believed to be the consequences of a communist victory. Overall, the US funneled $10 million to $20 million into the country for specifically anti-PCI purposes. Additionally, millions of dollars from the Economic Cooperation Administration affiliated with the Marshall Plan were spent on anti-communist "information activities."[16]

The Irish government, motivated by the country's devout Catholicism also inferred in the election by funneling the modern day equivalent of €2 million through the Irish Embassy to the Vatican who then distributed it to Catholic politicians. Joseph Walshe, the ambassador to the Vatican had privately suggested secretly funding Azione Cattolica.[17]

It is claimed that the PCI was being funded by the Soviet Union.[18] According to CIA operative Wyatt, "The Communist Party of Italy was funded...by black bags of money directly out of the Soviet compound in Rome; and the Italian services were aware of this. As the elections approached, the amounts grew, and the estimates [are] that $8 million to $10 million a month actually went into the coffers of communism. Not necessarily completely to the party: Mr. Di Vittorio and labor was powerful, and certainly a lot went to him," according to the former CIA operative.[14] Although the numbers are disputed, there is evidence of some financial aid, described as occasional and modest,[19] from the Kremlin.[20] PCI official Pietro Secchia and Stalin discussed financial support.[21]

The Christian Democrats eventually won the 1948 election with 48% of the vote, and the FDP received 31%. The CIA's practice of influencing the political situation was repeated in every Italian election for at least the next 24 years.[15] A leftist coalition would not win a general election for the next 48 years, until 1996. That was partly because of Italians' traditional bent for conservatism and, even more importantly, the Cold War, with the US closely watching Italy, in their determination to maintain a vital NATO presence amidst the Mediterranean and retain the Yalta-agreed status quo of western Europe.[22] 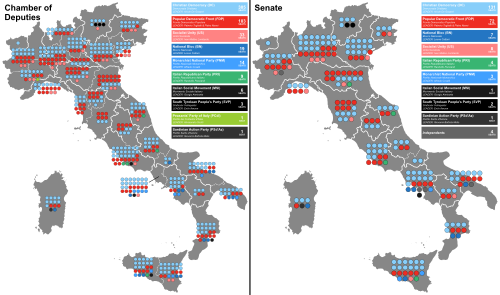 Christian Democracy won a sweeping victory, taking 48.5 percent of the vote and 305 seats in the Chamber of Deputies and 131 seats in the Senate. With an absolute majority in both chambers, DC leader and premier Alcide De Gasperi could have formed an exclusively DC government. Instead, he formed a "centrist" coalition with Liberals, Republicans and Social Democrats. De Gasperi formed three ministries during the parliamentary term, the second one in 1950 after the defection of the Liberals, who hoped for more rightist politics, and the third one in 1951 after the defection of the Social-democrats, who hoped for more leftist politics.

Following a provision of the new republican constitution, all living democratic deputies elected during the 1924 general election and deposed by the National Fascist Party in 1926, automatically became members of the first republican Senate.