Until 1946, Italy had been a kingdom ruled by the House of Savoy, kings of Italy since the Risorgimento and previously rulers of Savoy. However, Benito Mussolini imposed fascism after the 28 October 1922 March on Rome, eventually engaging Italy in World War II alongside Nazi Germany. The popular referendum resulted in voters favouring the replacement of the monarchy with a republic. Monarchists had suspicions of fraud, but were never able to prove it. A constituent assembly was elected at the same time.[4]

The Italian referendum was intended only to determine whether the head of state should come from a family dynasty or be elected by popular vote. Democracy was not a new concept in Italian politics. The Kingdom of Piedmont had become a constitutional monarchy with the liberalizing reforms of King Charles Albert's famous Albertine Statute in 1848. Suffrage, initially limited to select citizens, was gradually expanded; in 1911, the government of Giovanni Giolitti introduced universal suffrage for male citizens. In this period, the provisions of the Statute were often not observed, however. Instead, the elected Chamber and the Head of Government took major roles. At the beginning of the 20th century, many observers thought that, by comparison to other countries, Italy was developing in the direction of a modern democracy. Essential issues that needed to be resolved included the relationship of the Kingdom with the Roman Catholic Church. 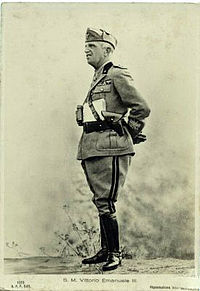 King Victor Emanuel III in his uniform as Marshal of Italy, 1936

A crisis arose in Italian society as a result of the First World War, social inequalities, and the consequent tension between Marxist and other left-wing parties on one side and conservative liberals on the other. This crisis led to the advent of fascism, which destroyed freedoms and civil rights and established a dictatorship, breaking the continuity of the still fragile new parliamentary tradition. The support of the ruling class and especially the monarchy was crucial for the seizure of power by Benito Mussolini. After Mussolini's March on Rome, King Victor Emmanuel III refused to sign a decree to declare a state of siege and instead asked Mussolini to form a new government. The King's decision was within his powers under the Italian constitution, but contrary to the parliamentary practices of the Italian liberal state, as the Fascist Party had only a small minority of the parliamentary deputies.

After the invasion of Italy by Allied forces in 1943, Mussolini's Grand Fascist Council, with the co-operation of the King, overthrew Mussolini and established a new government headed by Marshal Pietro Badoglio. However, Germany, worried by the new government's intention to negotiate a separate peace with the Allies, invaded and occupied Northern Italy. In the Gran Sasso raid, or Operation Oak, German paratroopers rescued Mussolini from the hilltop hotel in which he had been imprisoned by the new government. Under pressure from Hitler, Mussolini then established a puppet state, the Italian Social Republic to administer the German-occupied territory, leading to Italy being split in two, each with its own government. In the north, Mussolini declared that the monarchy had been overthrown and began to establish a new republican state, with himself as Duce, but for practical purposes under the control of Karl Wolff and Rudolf Rahn. The Italian Social Republic had its seat of government in the town of Salò, so is commonly known as the Republic of Salo.

Southern Italy, meanwhile, remained nominally under the control of the new legitimist government of Badoglio, continuing to operate as the Kingdom of Italy. Rome descended into chaos, as fighting erupted between Mussolini loyalists and supporters of the new government, as well as leftist opponents of fascism who emerged from hiding. The King and the Badoglio government left Rome to seek the protection of the Allied forces that occupied the South. With half of the Italian peninsula occupied by the Germans and the rest by the Allies, a return to civil rights was suspended due to the complete disorder in the country. The pre-Fascist-era parties had been formally disbanded, and so far as they still existed their activity was clandestine and limited, with no form of contact with most of the population. Consequently, the future relationships between these parties, and the balance of power, was left to be decided at a later, quieter time. However, some political forces organized the Italian Resistance, which enjoyed strong popular support. However, without an election, which could not be held because of the chaotic situation, it was impossible to determine how many people the Resistance represented. Almost all of the Resistance was anti-monarchist; nevertheless, a temporary alliance between them and the Badoglio government was created by the decision of Joseph Stalin and Palmiro Togliatti, secretary of the Italian Communist Party, to postpone the problem of the state organisation and focus all efforts on the fight against Hitler's puppet state in the North.

At the end of the war, Italy was a severely damaged country, with innumerable victims, a destroyed economy, and a desperate general condition. The defeat left the country deprived of the Empire it had fought for in the past two decades and also occupied by foreign soldiers. For some years after 1945, internal, politically motivated fighting continued.

The emergence of political forces to replace fascism could not occur until the internal conflict ended and elections could be held. After fighting had died down, a few months were needed before attention could be given to institutional matters. The first important question regarded the royal family, blamed by many for the fascist regime, the war, and the defeat.

Republican traditions in Italy traditionally hark back to the Roman Republic and the Medieval Communes, in which a wide spectrum of people took part in the business of government, but remained largely theoretical, as in the conclusion of Machiavelli's Il Principe. The struggle for a Republican Italy independent of foreign powers had been started by Giuseppe Mazzini in the 19th century. The movement Giustizia e Libertà, which continued the traditional Mazzinian ideology, was the second important force during the resistance. It posed the question of the form of the state as a fundamental precondition to developing any further agreements with the other parties. Giustizia e Libertà joined the Comitato di Liberazione Nazionale (National Liberation Committee, CLN). The various competing political factions agreed that a popular referendum would be held to determine the future choice of Head of State. 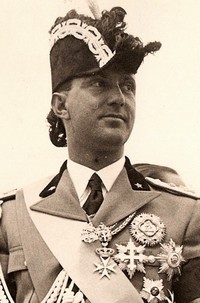 As the Allies advanced through the peninsula, it became apparent that Victor Emmanuel III was too compromised by his earlier support of Mussolini to have any further role. Accordingly, in April 1944, he turned over most of his powers to Crown Prince Umberto. When Rome was recaptured on 4 June, Victor Emmanuel relinquished his remaining powers to Umberto and named him Lieutenant General of the Realm, making him the de facto regent.

However, Victor Emmanuel retained the title of king until his abdication in May 1946. Umberto then formally ascended the throne as Umberto II. It has been said[who?] that the abdication had been imposed by opponents, but the royal house, too, had an interest in the manoeuvre. It was convenient for the House of Savoy, in fact, to have a popular king "on stage" at that crucial moment. Umberto was more acceptable to the Italian people: he and his wife Maria José were young, elegant and cultivated, and presented a stark contrast to the old, rough Victor Emmanuel who was unknown for any particular activity, apart from his collection of coins (114,000 items). Umberto was relatively well received by the people from the moment of his crowning, even if his wife (a foreigner) was kept at some distance. He was commonly called Il Re di Maggio (the King of May), with reference to his brief rule of forty days.

A decree by Crown Prince Umberto, issued in his capacity as Lieutenant General of the Realm (decreto legge luogotenenziale 25 giugno 1944, n. 151) during Ivanoe Bonomi’s time in office as Prime Minister, prescribed that a Constitutional Assembly would be organized after the war to draft a constitution and to choose an institutional form for the state.

The institutional debate was accelerated in the spring of 1946.

The political campaign for the referendum was framed by incidents, especially in northern Italy, where monarchists were attacked by both republicans and post-fascists of the Italian Social Republic. Following a second decree (decreto legge luogotenenziale 16 marzo 1946, n. 98), during the government of De Gasperi, a referendum was held on 2 June and 3 June 1946 (2 June later was named as a national holiday). The question was as simple as possible: Republic or Monarchy. South Tyrol and the areas of Trieste and Gorizia did not take part in the referendum.

Following Italian law, the results were checked by the Corte di Cassazione (the highest judicial Court at that time), as expected. A problem arose when the Court, itself divided between monarchists and republicans, provisionally declared a republican victory on 10 June, but postponing the final result to 18 June. To avoid huge dangers of political riots due to the Court's delay, the government itself declared a republic and appointed De Gasperi as the provisional Head of State on 13 June. The legality of this action (according to the law in force at the time) is debated, as the Corte di Cassazione already declared a republican victory, at the same time stating that further data were to be analyzed. 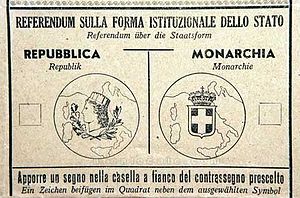 Ballot paper used in the referendum in German-speaking areas.

Results by district showing percentage of support for the republic

By most populated city

The republic was formally proclaimed on 6 June 1946, ending King Umberto II's brief 34-day reign as king. Umberto at first refused to accept what he called "the outrageous illegality" of the referendum, and took his deposition badly.[5] In his last statement as king, Umberto refused to accept the republic, saying he was the victim of a coup d'état by his ministers and the referendum had been rigged against him.[5][6] In response, Alcide De Gasperi who became acting president replied in a press statement:

"We must strive to understand the tragedy of someone who, after inheriting a military defeat and a disastrous complicity with dictatorship, tried hard in recent months to work with patience and good will towards a better future. But this final act of the thousand-year old House of Savoy must be seen as part of our national catastrophe; it is an expiation, an expiation forced upon all of us, even those who have not shared directly in the guilt of the dynasty".[5]

Some monarchists advocated using force to prevent a republic from being proclaimed, even at the risk of a civil war, but Mack Smith wrote that: "Common sense and patriotism saved Umberto from accepting such counsel".[7] Umberto rejected the advice that he should go to Naples, proclaim a rival government with the intention of starting a civil war in which the Army would presumably side with the House of Savoy under the grounds that "My house united Italy. It will not divide it".[8] The monarchy of the House of Savoy formally ended on 12 June 1946, and Umberto left the country. Prime Minister Alcide de Gasperi assumed office as Italy's interim Head of State. At about 15:00 on 13 June, Umberto left the Quirinal Palace for the last time with the servants all assembled in the courtyard to see him off; many were in tears.[8] At the Ciampino Airport in Rome, as Umberto boarded the aeroplane that was to take him to Lisbon, a Carabiniere grabbed him by the hand and shaking it in tears said "Your Majesty, we will never forget you!"[8]