The 1906 Chicago Cubs season was the 35th season of the Chicago Cubs franchise, the 31st in the National League and the 14th at West Side Park. The team won the National League pennant with a record of 116–36, a full 20 games ahead of the second-place New York Giants. The team's .763 winning percentage, with two ties in their 154-game season,[1][2] is the highest in modern MLB history. The 2001 Seattle Mariners also won 116 games, but they did that in 162 games with a .716 winning percentage.

In a major upset, the Cubs were beaten by the Chicago White Sox in the 1906 World Series. 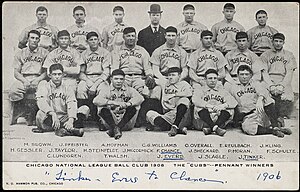 Led by new manager Frank Chance, the Cubs dominated the NL. They led the league in both runs scored and fewest runs allowed by large margins. Their record of 116 wins has never been beaten, although it was tied by the 2001 Seattle Mariners (who played a longer 162-game season).

The team's .763 winning percentage also set a modern-era record, and was the best overall since 1885. However, it set neither a National League record nor even a franchise record, as the 19th-century White Stockings finished with better records on three occasions (1876, 1880, and 1885). The all-time major league record belongs to the 1884 St. Louis Maroons of the Union Association at .832.

On August 9, Jack Taylor threw the last of a major league record 187 consecutive complete games that he pitched[4] (not counting appearances as a relief pitcher), a streak that began in 1901 when Taylor was pitching for the Chicago Orphans. Taylor had been re-acquired from the St. Louis Cardinals on July 1, having been traded to the Cards after the 1903 season.[5]