18th Street, also known as Calle 18, Barrio 18, Mara 18, or simply La 18 in Central America,[1][4][5][6] is a multi-ethnic (largely Central American and Mexican) transnational criminal organization that started as a street gang in Los Angeles. It is one of the largest transnational criminal gangs in Los Angeles, with 30,000 to 50,000 members in 20 states across the US alone and is also allied with the Mexican Mafia.[7][deprecated source] A United States Department of Justice report featured the following statement regarding 18th Street and rival gang MS-13, "These two gangs have turned the Central American northern triangle into the area with the highest homicide rate in the world."[8]

18th Street gang started near 18th Street and Union Avenue in the Rampart District of Los Angeles.[1] There is conflicting information as to the exact area, but this is a generally accepted area by most academic sources. They were originally part of Clanton 14 but wanted to make a separate "clique" called Clanton 18th Street and allow immigrants the opportunity to join. This proposal was rejected by the Clanton 14, which led to the formation of the 18th Street gang. The two gangs have been bitter rivals ever since.[9]

The 18th Street gang grew by expanding its membership to other nationalities and races, and it was among the first multiracial, multi-ethnic gangs in Los Angeles.[1] In the beginning, they were made up largely of second-generation Hispanics.[1] As the 18th Street gang began to battle with more established Hispanic gangs, they began to recruit outside the Hispanic community. There are approximately 200 separate individual autonomous gangs operating under the same name within separate barrios in the San Fernando Valley, the San Gabriel Valley, South Bay, Riverside, East Los Angeles, South Los Angeles, Downtown Los Angeles, Pico Union, Inglewood, Lynwood, South Gate, Huntington Park, Maywood, Long Beach, Orange County, and Los Angeles' Westside, according to the latest figures from the NDIC.[citation needed] In the early 2000s, the Federal Bureau of Investigation initiated wide-scale raids against known and suspected gang members, netting hundreds of arrests across the country.

The majority of 18th Street cliques operate throughout Southern California, but are active in other states and internationally as well. Los Angeles members began migrating to other areas outside America and started to establish their own cliques. 18th Street cliques have been identified in 120 cities in 37 states and the District of Columbia in the United States, as well internationally in Spain, Australia, Canada, England, France, Germany, Lebanon, Peru, Philippines, Chile, Ecuador, Mexico, Guatemala, Honduras, and El Salvador.[27]

18th Street gang members are required to abide by a strict set of rules. Failure to obey the word of a gang leader, or to show proper respect to a fellow gang member, may result in an 18-second beating, or even execution for more serious offenses.[28] According to the FBI, some factions of the 18th Street gang have developed a high level of sophistication and organization. 18th Street gang members often identify themselves with the number 18 on their clothing and sporting clothing from sports teams such as the Duke Blue Devils, Los Angeles Clippers, Los Angeles Angels, Los Angeles Chargers, Los Angeles Dodgers, Los Angeles Lakers and Las Vegas Raiders. 18th Street will use the symbols XV3, XVIII, X8, 99 (9+9=18), and 3-dots in their graffiti and tattoos. 18th Street colors are blue and black; blue is to represent and to pay tribute to The Mexican Mafia, and black is to represent the original color for the gang. The 18th Street gang is occasionally referred to as the "Children's Army" because of its recruitment of elementary and middle-school aged youth. They also allow other races to join their ranks making the gang multi-ethnic. In El Salvador it is common for members of the gang to be tattooed on the face with a large "18". In many cases the tattoo covers the entire face.[29] 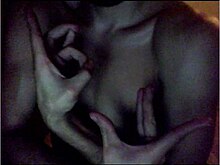 "We recognize them as one of the most violent street gangs and one of the most prolific in the United States," says Special agent George Rodriguez, who until his retirement oversaw investigations for the federal Bureau of Alcohol, Tobacco, Firearms and Explosives. Cars are stolen and homes are burglarized by the gang routinely. On average, someone in Los Angeles County is assaulted or robbed by 18th Streeters every day. The gang has left a bloody trail at a pace three times that of many of the city's most active gangs. 18th Street is a well established gang that is involved in all areas of street-crime. Several 18th Street gang members have reached a higher level of sophistication and organization in their illicit activities than other gangs. While their main source of income is street-level distribution of drugs, they also have been linked to murders, assaults, arson, copyright infringement, extortion, human trafficking, illegal immigration, kidnapping, prostitution, robbery, and weapons trafficking, as well as other crimes.[30] 18th Street Gang has also been implicated in the high-profile kidnapping and murder of the 16-year-old brother of internationally renowned Honduran football player Wilson Palacios.[31]

In 1998, Catarino Gonzalez was sentenced to life in prison after a jury convicted Gonzalez of first-degree murder for fatally shooting Officer Filbert Cuesta in the back of the head, while the officer was sitting in a patrol car.[32][33] Kingston, New York police arrested and jailed several young men on the charge that they abducted a victim, took him to nearby woods, and murdered him. They were held on federal murder and racketeering charges.[34]