The 1878 Canadian federal election was held on September 17 to elect members of the House of Commons of Canada of the 4th Parliament of Canada. It resulted in the end of Prime Minister Alexander Mackenzie's Liberal government after only one term in office. Canada suffered an economic depression during Mackenzie's term, and his party was punished by the voters for it. The Liberals' policy of free trade also hurt their support with the business establishment in Toronto and Montreal.

Sir John A. Macdonald and his Conservative/Liberal-Conservative party was returned to office after having been defeated four years before amidst scandals over the building of the Canadian Pacific Railway. 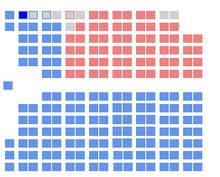 The Canadian parliament after the 1878 election