Şırnak Province (Turkish: Şırnak ili, Kurdish: Parêzgeha Şirnexê‎[3]) is a province of Turkey in the Southeastern Anatolia Region. Şırnak, in Turkish Kurdistan, borders Iraq and Syria. Şırnak Province was created in 1990, with areas that were formerly part of the Siirt and Mardin Provinces. Its major settlements include Cizre and Silopi. The current Governor of the province is Ali Hamza Pehlivan.[4]

As of 2013, the province had an estimated population of 475,255 people.[5] Kurdish people are the majority of the province's population.[6] 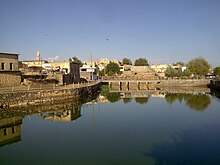 In order to Turkefy the local population,[9] in June 1927 the Law 1164 was passed[10] which allowed the creation of Inspectorates-General (Umumi Müffetişlik, UM).[11] The province therefore was included in the so-called First Inspectorate General (Turkish: Birinci Umumi Müfettişlik) , which span over the provinces of Hakkâri, Siirt, Van, Mardin, Şırnak Bitlis, Sanlıurfa, Elaziğ, and Diyarbakır.[12] The First Inspectorate General was established on the 1 January 1928 and had its headquarters in Diyarbakır.[13] The UM was governed by an Inspector General, who governed with a wide-ranging authority over civilian, juridical and military matters.[11] In 1948 the policy of governing the province within the Inspectorate General was left behind and the administration was not re-employed again,[11] but the office of the Inspector General was only dissolved in 1952 during the government of the Democrat Party.[14]

Şırnak has been a focal point in Turkey's struggle against the Kurdistan Workers' Party (PKK).

Turkey's anti-terror operations against the PKK began in 1984.[15] From its creation in 1990 to 2002, Şırnak Province was part of the OHAL (State of emergency) region which was declared to counter the PKK and governed by a so called Supergovernor who was given additional powers than a normal provincial Governor. He was given the power to relocate and resettle whole villages, settlements and hamlets.[16] In December 1990 with the Decree No. 430, the supergovernor and the provincial governors in the OHAL region received immunity against any legal prosecution in connections with actions they made due to the powers they received with the Decree No. 430.[17]

On 18 August 1992 Turkish forces attacked the city, killing 54 people, mostly children and women. For three days homes were burned, livestock were killed, and people were killed. 20,000 out of 25,000 residents fled the city, Amnesty International reported.[18][19]

During the operation, a curfew was imposed in the town and when it finally ended, the whole city was in ruins.

While the town was under bombardment, there was no way to get an account of what was happening in the region as journalists were prevented from entering the city centre which was completely burned down by the security forces. Şırnak was under fire for three days and tanks and cannons were used to hit buildings occupied by civilians.[20]

The 2015–16 Şırnak clashes took place in Şırnak City, Cizre, Idil and Silopi. On 14 March 2016 a curfew was declared in Şırnak province. This marked the start of an 80 day long operation against Kurdish militant in the province. The curfew remained in place for 9 months.[22] 2,044 buildings were destroyed during the military operation.[23]