İskenderun (Greek: Αλεξανδρέττα "Little Alexandria"), historically known as Alexandretta and Scanderoon,[3][4][5] is a city and the largest district in Hatay Province on the Mediterranean coast of Turkey.

The city was founded as Alexandria (Ἀλεξάνδρεια) and named after Alexander the Great.

After the Muslim conquest of Syria, it was named al-ʼIskandarūn (Arabic الإسكندرون), the Arabic rendering of the original "Alexandrou"; this name was further turkified into Ottoman Turkish as İskenderūn (إسكندرون), which in turn was preserved in its current modern Turkish form as İskenderun.

İskenderun is located on the eastern Mediterranean coast on the Gulf of İskenderun, at the foot of the Nur Mountains (Amanos Mountains).

İskenderun is a busy commercial centre and is one of the largest cities in Hatay Province, similar in size to the provincial seat of Antakya. The city is one of Turkey's largest ports on the Mediterranean and an important industrial centre, home to the İsdemir steelworks, one of Turkey's largest. İskenderun has an active, modern life with good hotels, restaurants and cafes along the palm-lined sea front. There is a variety of accommodation for visitors. İskenderun is also an important naval training base.

The climate on this stretch of the Mediterranean is hot and humid in summer. Winters are mild and wet (Köppen: Csa). At certain times of the year the town is swept by a strong wind called 'Yarıkkaya'. The countryside contains large areas of fruit groves. It is an important producer of oranges, tangerines and lemons, and even tropical fruits such as mangoes.

Distinctive İskenderun dishes include Künefe, a hot dessert with cheese. The main dishes include the Turkish staples such as döner and other kebabs served in the flat dürüm bread, lahmacun and also Antakya influenced cuisine including kibbeh, and sour pomegranate syrup used as a salad dressing. İskenderun in particular offers good quality fish and prawns. 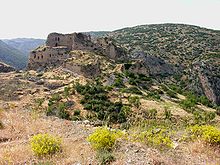 Ruins of Bagras Castle on the Nur (Amanos) Mountains near İskenderun

İskenderun preserves the name, but probably not the exact site, of Alexandria ad Issum. The settlement was founded by Alexander the Great in 333 BC to supersede Myriandus as the key to the Syrian Gates, about 37 km (23 miles) south of the scene of his victory at the Battle of Issus. Alexander camped in the highlands of İskenderun, around Esentepe, and then ordered the city to be established and named Alexandria. İskenderun is one of many cities founded on Alexander's orders, including Alexandria, Egypt. A memorial, a monument and a bronze statue for the victory raised at the city, and Herodian writes that they were there even at his time.[10]

The importance of the place comes from its relation to the Syrian Gates, the easiest approach to the open ground of Hatay Province and Aleppo.

The Peutinger Map showing İskenderun and Seleucia in the 4th century.

The bishopric of Alexandria Minor was a suffragan of Anazarbus, the capital and so also the ecclesiastical metropolis of the Roman province of Cilicia Secunda. Greek menologia speak of Saint Helenus, and the martyr saints Aristio and Theodore as early bishops of the See. But the first documented one is Hesychius, who took part in the First Council of Nicaea in 325 and in a synod at Antioch in 341. Philomusus participated in the First Council of Constantinople in 381. Baranes is mentioned in connection with a synod at Antioch in 445. At the Council of Chalcedon in 451, Julianus was represented by his metropolitan, Cyrus of Anazarbus. Basilius was at the synod in Constantinople in 459 that condemned simoniacs. In 518, Paulus was deposed by the Byzantine Emperor Justinian for supporting the Jacobite Severus of Antioch.[11][12]

The district center and Gulf of İskenderun

No longer a residential diocese, Alexandria Minor is today listed by the Catholic Church as a titular see.[13] In that list it was long named Cambysopolis,[14] but the Annuario Pontificio now gives the correct ancient name.

The Martyrs Monument in İskenderun

There was fighting here under the Ottoman Empire: in 1606 the army of General Kuyucu Murat Pasha suppressed the Jelali revolts. The Ottomans continued to fortify the city, and the remains of the early 17th-century Ottoman castle walls can still be seen where the Güzün stream crosses the Varyant road. The city was well described in 1675 by the English naval chaplain Henry Teonge in his diary. The next army to cross the Belen Pass and attack Anatolia through here were the Egyptians of Muhammad Ali in 1832. 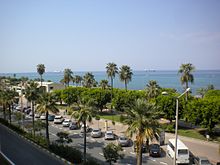 View of the Mediterranean Sea from the promenade of İskenderun

However, in the later Ottoman period the city developed as the main port on the Mediterranean for the overland trade from Baghdad and India, which had great importance until the establishment of the Egyptian overland route. Iskenderun served as a base, first for Genoese and Venetian merchants, then Western and Northern European merchants. The British Levant Company maintained an agency and factory here for 200 years, until 1825, in spite of high mortality among its employees because of regional disease, some due to lack of sanitation systems. During the 19th century the port grew, and the road to Aleppo was improved. The railway was built in 1912.

At the outset of World War I, when Britain was contemplating the partition of the Ottoman Empire, Lord Kitchener considered the conquest of Alexandretta to be essential in providing Britain with a port and railhead from which to access Iraq. He proposed a new railway be built to the east from Alexandretta, which would greatly reduce the time for reaching India from the UK. The De Bunsen Committee (8 April - 30 June 1915), a British inter-departmental group which was set up to discuss the issue in greater detail, preferred Haifa for this purpose.[15]

Ultimately the British decided not to attack the Ottoman Empire via Alexandretta. On 8 February 1915 the French foreign minister, Théophile Delcassé, protested to Britain's Foreign Secretary, Sir Edward Grey about such an attack, citing a commitment that Britain made in 1912 that it had no designs on Syria.[16] The German field marshal, Hindenburg, subsequently said that

"Perhaps not the whole course of the war, but certainly the fate of our Ottoman Ally, could have been settled out of hand, if England had secured a decision in that region, or even seriously attempted it. Possession of the country south of the Tauras [mountains] would have been lost to Turkey at a blow if the English had succeeded in landing at Alexandretta".[17]

Following the collapse of the Ottoman Empire at the end of the First World War, most of Hatay including İskenderun was occupied by French troops. Between 1921 and 1937, the city was part of the autonomous Sanjak of Alexandretta within French-controlled Syria, under the League of Nations French Mandate of Syria and the Lebanon.[18] The Republic of Hatay was founded in 1938 and, in 1939, it joined with the Republic of Turkey after a referendum. The referendum was, and still is, regarded as illegitimate by Syria, as the Turkish government moved supporters into the city[19][20] and the Turkish Army "expelled most of the province's Alawite Arabs and Armenian majority" to decide the referendum result.[21]

Panoramic view of the Gulf of İskenderun from İskenderun's district center

İskenderun is served by the Güney Gazetesi newspaper.

İskenderun is featured in the film Indiana Jones and the Last Crusade as an important starting point for the Grail map. The State of Hatay is depicted as being ruled by a Sultan, although it was technically a transitional republic.