Map of The Øresund region

The Øresund strait between Malmö and Copenhagen with Malmö in the foreground and the island of Amager and part of southern Copenhagen in the background.

Copenhagen, with Parliament to the right and the former Stock Exchange to the left 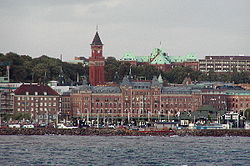 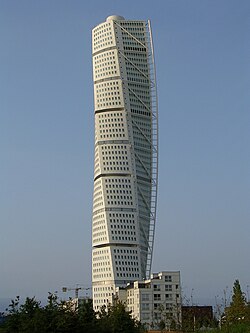 Malmö, with the Turning Torso skyscraper

The Øresund Region (Danish: Øresundsregionen [ˈøːɐsɔnsʁekiˌoˀnn̩]; Swedish: Öresundsregionen [œːrɛˈsɵ̂nːdsrɛɡɪˌuːnɛn]), also known as Greater Copenhagen for marketing purposes,[1] is a metropolitan region that comprises eastern Denmark and Skåne in southern Sweden. Centred around the Øresund strait and the two cities which lie on either side, Copenhagen in Denmark and Malmö in Sweden, the region is connected by the Øresund Bridge, which spans the strait at its southern end, and the HH Ferry route between Helsingør, Denmark, and Helsingborg, Sweden, at the narrowest point of the strait.

Since the Treaty of Roskilde of 1658, Scania (Swedish: Skåne) has been subordinate to the King of Sweden, except during the Scanian War (1676–79) and briefly in 1710, but it only became a province of Sweden under the Treaty of Stockholm 1720 (dated 3 July 1720).[3] From 800 to 1658, Greater Copenhagen was united under the flag of Denmark, although in the early years Denmark sometimes had several local kings. In recent years, part of the population has stressed Scania's regional identity again.[4]

The Øresund Region is an important hub for economic activity in Scandinavia.[6]

Statistics compiled in January 2007 show 14,000 people commuting each day over the Öresund Bridge.[8] Compared with 2005, the commuter traffic increased by 43% in 2006. The growing number of Swedes commuting in order to take advantage of the need for labour on the job market in Copenhagen and the higher salaries offered in Denmark, as well as an increased immigration of Danes to the south of Sweden, were essential factors in the traffic increase.[8] In 2006, 4,300 persons moved from the Danish part of the Øresund Region to Scania, attracted by lower Scanian real estate prices.[8] Since July 2000, 22,500 Danes have moved to Scania.[9]

Apart from work related commuting, Swedes cross over to Copenhagen to enjoy shopping and nightlife, to attend cultural and educational institutions and to use Copenhagen Airport. The largest airport in Scania, Malmö Airport is located 47 km (29.2 mi) from Copenhagen Airport and has limited international air traffic.

After the opening of the bridge in 2000, an 'Öresund identity' has been promoted in the region in order to counter-act various barriers to cross-border cooperation caused by nationalistic sentiments on both sides.[10] In 1997, a consortium of twelve universities (four Swedish and eight Danish) from both sides of the Sound has been established, opening up all courses, libraries and other facilities to all students, teachers and researchers from the region.[11] The universities have 150,000 students and more than 14,000 researchers combined. The secretariat is located at Lund University and at the University of Copenhagen.

The commercial interaction across the border has also significantly increased. In 2018, an average of 19,100 vehicles crossed the bridge each day.[12]

In May 2018 the Øresundsmetro Executive was announced, formed of representatives from the two cities, industry and researchers, to explore the proposal to link Copenhagen and Malmö via a driverless metro system, with travel time of around 20 minutes compared to 35 minutes by train.[14]

Since 1993, local, regional and national authorities have cooperated in a regional policy forum called the Øresund Committee - from 2016 The Greater Copenhagen & Skåne Committee. The forum consists of 18 politicians, whose election periods differ as they comply with the functional period for the various authorities they represent.[15]

The committee is legally a member organization funded by its members and by the Nordic Council through external project funding. The European Union cross-border projects have supported the region through Interreg II (1994–1999) and Interreg IIIA, operative since the end of 2000.[16] In 1997, an EU-funded EURORES project was launched in the region in order to promote a common labor market.

One deterrent to closer economic integration is the lack of a single currency, as both Sweden and Denmark maintain their own currencies, the Danish krone and Swedish krona, although both are accepted in some areas of the other country.

Another problem has been a lack of transparency of the rules for taxes, social security, pension and unemployment benefits. While specific tax treaties exist for the region, there are still problems with administrating them. People commuting to work over the border (Danish: grænsegænger, Swedish: gränsarbetare) had a problem receiving information of rules affecting them and sometimes risked paying double taxes. They also risked losing the right to unemployment benefits because foreign employment did not contribute to entitlements in their home state, losing the right to kindergarten for their small children for the same reason etc. Some of these problems have been solved after the recent years of political coordination between the countries, but the local tax authorities have difficulties implementing the complex rules for cross-border taxation.[16]

An imbalance in the municipal budgets is also a problem, since the flow of commuters move mostly in one direction: from the residential side in Sweden to the labor market side in Denmark. Rules of taxation have left the Scanian municipalities with increased costs not covered by increased tax revenues from the growing commuter population mainly taxed in the country of employment.[16]

A fourth problem is voting privileges; Danes living in the Swedish part of the Øresund Region, but working in the Danish part, lose their right to vote in general elections in Denmark even if they work in Denmark.[17]

The region is divided into seven statistical areas (NUTS 3), six in Denmark and one in Sweden.