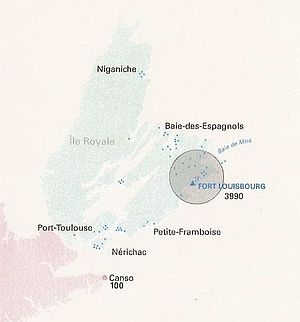 Île-Royale was a French colony in North America that existed from 1713 to 1763, consisting of two islands, Île Royale and Île Saint-Jean. Its territory is known now as Cape Breton Island (part of the Canadian province of Nova Scotia) and Prince Edward Island.

The Treaty of Utrecht (1713), which brought an end to the War of the Spanish Succession, broke the equilibrium that existed in North America between Great Britain and France. This treaty marked the start of the reduction of French royal authority in this region of the world. France recognized the rights of Great Britain on the Hudson Bay region and also ceded continental Acadia, Newfoundland and Saint Pierre and Miquelon.[1] The territory of modern New Brunswick was a source of contention between Great Britain and France for 50 years, which was only to be resolved by the Treaty of Paris in 1763 with the abject surrender of the French.

Article 13 of the Treaty of Utrecht reads: "The Island called Cape Breton and all the others located in the Gulf of Saint Lawrence, will as of this date belong to France...". In Newfoundland, the French kept their rights of fishing and the use of part of the land along the coast to work.

Philippe de Pastour de Costebelle, the French governor of Newfoundland since 1706, became the first governor of Île-Royale, the French colony established on Cape Breton Island, and served until 1707. He persuaded the inhabitants of Plaisance in 1714 and those of Saint Pierre and Miquelon to come live on the island. The Acadians refused to swear allegiance to the British crown, and some fled to Île-Royale instead. In 1714, they came to inspect the land and certain families, such as the Costes and the Tillards, decided to establish themselves while others only passed through before settling on Île Saint-Jean (present-day Prince Edward Island.[2] The majority established themselves at Saint-Pierre (renamed Port Toulouse) and situated on the eastern coast of Île-Royale, recreating the Acadian colony. French ships came regularly to fish cod. 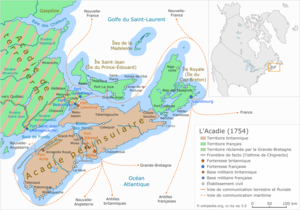 Louisbourg was founded in 1713, as fishing port for cod and a readily defensible harbour after the Treaty of Utrecht had evicted the French from what is now Nova Scotia and New Brunswick. Louisbourg lived peacefully for three decades as seaport for the French colony. A fortress was constructed starting in 1719 to protect French interests in the new world, and to serve the seasonal fishing industry. Its geographic position permitted Louisbourg to serve not only as capital of Île-Royale, but as first line of defence in the 18th century during the wars with Great Britain for the supremacy of North America.

The troops of New England aided by the British Royal Marines captured the city in 1745 after six weeks of siege. After three years of British governance, Louisbourg was returned to France in the Treaty of Aix-la-Chapelle.

The Minister of Marine appointed Charles des Herbiers de La Ralière as governor in 1748, and Jean-Louis de Raymond in 1751,[3] who was replaced in 1754 by Augustin de Boschenry de Drucour.

Peace was short lived, and on 26 July 1758, after the Siege of Louisbourg, the French Governor Augustin de Drucourt gave the keys of the city to the British and Edward Boscawen after one of the greatest assaults—led by James Wolfe—in the history of colonial Canada. After that, 4,000 Acadian inhabitants were deported. However, a group of ten families from Port-Toulouse fled to Isle Madame where their descendants still live today.