Anarchist schools of thought Outline of anarchism Anarchism and religion

Jacques Élisée Reclus (French: [ʁəkly]; 15 March 1830 – 4 July 1905) was a renowned French geographer, writer and anarchist. He produced his 19-volume masterwork, La Nouvelle Géographie universelle, la terre et les hommes ("Universal Geography"), over a period of nearly 20 years (1875–1894). In 1892 he was awarded the Gold Medal of the Paris Geographical Society for this work, despite having been banished from France because of his political activism.

Reclus was born at Sainte-Foy-la-Grande (Gironde). He was the second son of a Protestant pastor and his wife. From the family of fourteen children, several brothers, including fellow geographers Onésime and Élie Reclus, went on to achieve renown either as men of letters, politicians or members of the learned professions.[1]

Reclus began his education in Rhenish Prussia, and continued higher studies at the Protestant college of Montauban. He completed his studies at University of Berlin, where he followed a long course of geography under Carl Ritter.[1]

Withdrawing from France due to the political events of December 1851, as a young man he spent the next six years (1852–1857) traveling and working in Great Britain, the United States, Central America, and Colombia.[1] Arriving in Louisiana in 1853, Reclus worked for about two and a half years as a tutor to the children of cousin Septime and Félicité Fortier at their plantation Félicité, located about 80 kilometres (50 mi) upriver from New Orleans. He recounted his passage through the Mississippi River Delta and impressions of antebellum New Orleans and the state in Fragment d'un voyage á Louisiane, published in 1855.[2]

On his return to Paris, Reclus contributed to the Revue des deux mondes, the Tour du monde and other periodicals, a large number of articles embodying the results of his geographical work. Among other works of this period was the short book Histoire d'un ruisseau, in which he traced the development of a great river from source to mouth. During 1867 and 1868, he published La Terre; description des phénomènes de la vie du globe in two volumes.[1]

During the Siege of Paris (1870–1871), Reclus shared in the aerostatic operations conducted by Félix Nadar, and also served in the National Guard. As a member of the Association Nationale des Travailleurs, he published a hostile manifesto against the government of Versailles in support of the Paris Commune of 1871 in the Cri du Peuple.[1]

Continuing to serve in the National Guard, which was then in open revolt, Reclus was taken prisoner on 5 April. On 16 November he was sentenced to deportation for life. Because of intervention by supporters from England, the sentence was commuted in January 1872 to perpetual banishment from France.[1]

After a short visit to Italy, Reclus settled at Clarens, Switzerland, where he resumed his literary labours and produced Histoire d'une montagne, a companion to Histoire d'un ruisseau. There he wrote nearly the whole of his work, La Nouvelle Géographie universelle, la terre et les hommes, "an examination of every continent and country in terms of the effects that geographic features like rivers and mountains had on human populations—and vice versa,"[3] This compilation was profusely illustrated with maps, plans, and engravings. It was awarded the gold medal of the Paris Geographical Society in 1892. An English edition was published simultaneously, also in 19 volumes, the first four by translated E. G. Ravenstein, the rest by A. H. Keane. Reclus's writings were characterized by extreme accuracy and brilliant exposition, which gave them permanent literary and scientific value.[1]

According to Kirkpatrick Sale:[3]

His geographical work, thoroughly researched and unflinchingly scientific, laid out a picture of human-nature interaction that we today would call bioregionalism. It showed, with more detail than anyone but a dedicated geographer could possibly absorb, how the ecology of a place determined the kinds of lives and livelihoods its denizens would have and thus how people could properly live in self-regarding and self-determined bioregions without the interference of large and centralized governments that always try to homogenize diverse geographical areas.

In 1882, Reclus initiated the Anti-Marriage Movement. In accordance with these beliefs and the practice of union libre ("free unions"), which was common among working-class French in the mid-to-late 1800s,[4] Reclus allowed his two daughters to "marry" their male partners without any civil or religious ceremonies, an action causing embarrassment to many of his well-wishers.[1] Reclus had himself entered a free union in 1872, after the death of his first wife. In 1882 he also wrote Unions Libres, a pamphlet which detailed his anarchist and feminist objections to marriage.[5] The French government initiated prosecution from the High Court of Lyon, arrested him and Peter Kropotkin as the International Association's organizers, and sentenced the latter to five years' imprisonment. Reclus escaped punishment as he remained in Switzerland.[6] In a 1913 piece, Kropotkin, in admiration of Reclus, said that if anyone asked about the conflicts of the Middle East, that "I should merely open the volume of Elisée Reclus's Geographie Universelle L'Asie, Russe..."[7]

Reclus had strong views on naturism and the benefits of nudity. He argued that living naked was more hygienic than wearing clothes; he believed that it was healthier for skin to be fully exposed to light and air so that it could resume its "natural vitality and activity" and become more flexible and firm at the same time. He also argued that from an aesthetic point of view, nudity was better: naked people were more beautiful. His principal objection to clothing was, however, a moral one; he felt that a fixation with clothing caused excessive focus on what was covered.[8][9]:485 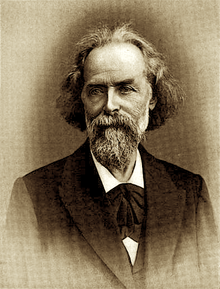 In 1894, Reclus was appointed chair of comparative geography at the University of Brussels, and moved with his family to Belgium. His brother Élie Reclus was at the university already, teaching religion.[6] Élisée Reclus continued to write, contributing several important articles and essays to French, German and English scientific journals. He was awarded the 1894 Patron's Gold Medal of the Royal Geographical Society.[10]

In 1905, shortly before his death, Reclus completed L'Homme et la terre, in which he rounded out his previous works by considering humanity's development relative to its geographical environment.[9][11]

On March 11, 1858, he was initiated in the regular Scottish Rite Masonic Lodge Les Émules d'Hiram, affiliated to the Grand Orient of France. His brother was just initiated and took part to his masonic baptism.[12][13][14] He remained at the initiatel degrees of the Masonic spiritual path.

Reclus married and had a family, including two daughters.

He died at Torhout, near Bruges, Belgium.

Reclus advocated nature conservation and opposed meat-eating and cruelty to animals. He was a vegetarian.[19] As a result, his ideas are seen by some historians and writers as anticipating the modern social ecology and animal rights movements.[20][21]

L'Homme et la terre ("The Earth and its Inhabitants"), 6 volumes: