French School of the Far East 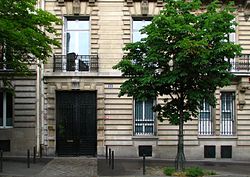 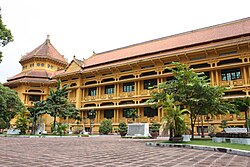 The French School of the Far East (French: École française d'Extrême-Orient, pronounced [ekɔl fʁɑ̃sɛːz dɛkstʁɛm ɔʁjɑ̃]), abbreviated EFEO, is an associated college of PSL University dedicated to the study of Asian societies. It was founded in 1900 with headquarters in Hanoi in what was then French Indochina. After the independence of Vietnam, its headquarters were transferred to Phnom Penh in 1957 and subsequently to Paris in 1975. Its main fields of research are archaeology, philology and the study of modern Asian societies. Since 1907, the EFEO has been in charge of conservation work at the archeological site of Angkor.

A romanization system for Mandarin was developed by the EFEO. It shares a few similarities with Wade-Giles and Hanyu Pinyin. In modern times, it has been superseded by Hanyu Pinyin.

The differences between the three romanization systems are shown in the following table:

The catalog of EFEO Publications, of some 600 titles, includes works on a wide range of disciplines in the humanities and social sciences (archaeology, history, anthropology, literature, philology, etc.), centered on Asia, from India to Japan. These publications are directed at specialists and a wider public interested in Asian civilizations and societies.[1]

The EFEO in publishes five scholarly journals on an annual or twice-yearly basis: