listen)) is a town in Møre og Romsdal county, Norway. The town is the administrative centre of Ålesund Municipality. The centre of the town of Ålesund lies on the islands of Heissa, Aspøya, Nørvøya with newer developments located on the islands of Uksenøya the outer parts of the "urban area" even stretch onto the island of Sula which is in the neighboring Sula Municipality.[3] The town is the main headquarters for the Norwegian Coastal Administration as well as the location of the Sunnmøre District Court.

The town has an unusually consistent architecture, most of the buildings having been built between 1904 and 1907. Jugendstilsenteret is a national interpretation centre, visitors can learn more about the town fire, the rebuilding of the town and the Art Nouveau style. Ålesund is a partner in the Art nouveau network, a European network of co-operation created in 1999 for the study, safeguards and development of the Art nouveau.[3]

The term "Little London" was often applied to the community during the occupation of Norway by Nazi Germany due to the Norwegian resistance work that took place here. Among other things, the city was central to the flights to Scotland and England. 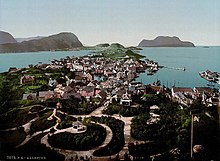 Legend has it that Gangerolf (outside of Norway better known as Rollo), the 10th-century founder of the dynasty of the dukes of Normandy, hailed from the community of Giske, north-west of the present-day town of Ålesund. At least three statues of Rolle exist: in the town park in Ålesund, in the city of Rouen, France, and in Fargo, North Dakota, United States.

The old prestegjeld of Borgund included all of what is now Ålesund. In 1793, the port of Aalesund was granted limited ladested rights. Later, in 1824, it was granted full ladested rights. In 1835, Ålesund had 482 inhabitants.[5] On 1 January 1838, the new formannskapsdistrikt law went into effect, granting limited local self-government to all parishes in Norway. Therefore, on that date, the small ladested of Aalesund became a small municipality with its own council. It was surrounded by the large rural municipality of Borgund. In 1848, it was upgraded to the status of a kjøpstad, a more important market town.

In the night of 23 January 1904, the town was the scene of the Ålesund Fire, one of the most terrible of the many conflagrations to which Norwegian towns, once built largely of wood, have been subjected. Practically the entire town was destroyed during the night, a gale aiding the flames, and the population had to leave the town in the middle of the night with only a few minutes' notice. Only one person died in the fire, the 76-year-old Ane Heen, but more than 10,000 people were left without shelter.[8]

Kaiser Wilhelm of Germany had often been on vacation to Sunnmøre. After the fire, he sent four warships with materials to build temporary shelters and barracks. After a period of planning, the town was rebuilt in stone, brick, and mortar in Jugendstil (Art Nouveau), the architectural style of the time. The structures were designed by approximately 20 master builders and 30 Norwegian architects, most of them educated in Trondheim and Charlottenburg, Berlin, drawing inspiration from all over Europe. To honor Wilhelm, one of the most frequented streets of the town is named after him.

A part of the town was historically known as Kaupangen Borgund. The Old Norse word kaupang means "marketplace" or "town", thus the market town for Borgund. The Old Norse form of the current name was Álasund. The first element of that (probably) is the plural genitive case of áll which means "eel" and the last element is sund which means "strait" or "sound".[9] Before 1921, the name was written Aalesund.

Panoramic view of the town of Ålesund, Norway, from partway up Aksla, a hill that overlooks the town

Ålesund has a temperate and heavily moderated oceanic climate (Köppen Cfb). Winters are mild, damp and windy; the coldest month of the year, January, has a mean temperature of 2 °C (36 °F).[10] The lowest temperature ever recorded at Ålesund Airport, Vigra was −11 °C (12 °F).[citation needed] The climate is extremely mild for the latitude and inland areas at similar parallels especially in lowland Sweden see much hotter summers and colder winters. The warmest temperature ever recorded in Ålesund is 34.4 °C (93.9 °F).

The following climate data is from the local Ålesund Airport, Vigra, which is technically not located in the town, but on a nearby island in the sea in Giske Municipality. Ålesund itself is more sheltered and has slightly warmer summers.

Ålesund is a port of call for passenger and freight vessels travelling between Bergen, Kingston upon Hull, Newcastle, Hamburg, and Trondheim, including the Hurtigruta (Norwegian Coastal Express) cruise ships, which arrive in Ålesund twice a day.[3]

The town's airport, Ålesund Airport, Vigra, has several daily flights to/from Oslo, Bergen, Trondheim, and Copenhagen. In November 2012 KLM announced it would fly to Ålesund 5 days a week from Amsterdam starting in April 2013.[12]

The inner harbour in winter

The Norwegian Centre of Art Nouveau Architecture, Jugendstilsenteret, is situated in Ålesund. It is a museum and competence center with exhibitions telling the story of the town fire and Art Nouveu/Jugendstil in Norway and Europe.[3]

Sunnmøre museum, founded in 1931, is an outdoor folk museum devoted to the Norwegian coastal culture and way of life. Located on an area of 120 hectares (300 acres), it has more than 55 old and distinct houses from the past 300 years moved to the site, replicas of old Viking ships, and the Medieval Age Museum with artifacts from excavations of the old trading centre.[13]

The local newspaper is Sunnmørsposten, founded in 1882 and published six days a week.[3] Ålesund is the site of the annual Norwegian Food Festival.

Ålesund is home to a sub-division of the Norwegian University of Science and Technology (NTNU), with approximately 1,800 students and 150 employees. The Ålesund School of Art (Norwegian: Ålesund Kunstskole) is a school for visual arts located in Ålesund.