listen)) is a municipality in Møre og Romsdal County, Norway. It is part of the traditional district of Sunnmøre and the centre of the Ålesund Region. The town of Ålesund is the administrative centre of Ålesund Municipality, as well as the principal shipping town of the Sunnmøre district. The town is a sea port and is noted for its concentration of Art Nouveau architecture. Although sometimes internationally spelled by its older name Aalesund, this spelling is obsolete in Norwegian. However, the local football club Aalesunds FK still carries that spelling, having been founded before the official change.

The 99-square-kilometre (38 sq mi) municipality is the 184th largest by area out of the 356 municipalities in Norway. Ålesund is the 13th most populous municipality in Norway with a population of 66,258. The municipality's population density is 109.1 inhabitants per square kilometre (283/sq mi) and its population has increased by 12.1% over the previous 10-year period.[4][5]

In 1793, the port of Aalesund was granted limited ladested rights. Later, in 1824, it was granted full ladested rights. In 1835, Ålesund had 482 inhabitants.[6] On 1 January 1838, the new formannskapsdistrikt law went into effect, granting limited local self-government to all parishes in Norway. Therefore, on that date, the small ladested of Aalesund became a small municipality with its own council. It was surrounded by the large rural municipality of Borgund. In 1848, it was upgraded to the status of a kjøpstad, a more important market town.

A part of the town was originally known as Kaupangen Borgund. The Old Norse word kaupang means "marketplace" or "town", thus the market town for Borgund. The Old Norse form of the current name was Álasund. The first element of that (probably) is the plural genitive case of áll which means "eel" and the last element is sund which means "strait" or "sound".[9] Before 1921, the name was written Aalesund.

The coat of arms was granted on 1 April 1898. The red and silver arms show a fishing boat on the water with three fish swimming. The arms symbolize the importance of fishing for Ålesund. The type of ship was typical for the ships used in the 18th and 19th century and is taken from a drawing made in 1762. The waves and three fish were added to the drawing in the arms.[10]

The arms are shown in the Kaffe Hag album with the boat sailing right instead of sailing left.

The Church of Norway has twelve parishes (sokn) within the municipality of Ålesund. It is part of the Nordre Sunnmøre prosti (deanery) in the Diocese of Møre. The seat of the deanery is at Ålesund Church.

Legend has it that Gangerolf (outside of Norway better known as Rollo), the 10th-century founder of the dynasty of the dukes of Normandy, hailed from the community of Giske, north-west of Ålesund. At least three statues of Rolle exist: in the town park in Ålesund, in the city of Rouen, France, and in Fargo, North Dakota, United States.

In the night of 23 January 1904, the town was the scene of the Ålesund Fire, one of the most terrible of the many conflagrations to which Norwegian towns, once built largely of wood, have been subjected. Practically the entire town was destroyed during the night, a gale aiding the flames, and the population had to leave the town in the middle of the night with only a few minutes' notice. Only one person died in the fire, the 76-year-old Ane Heen, but more than 10,000 people were left without shelter.[12] 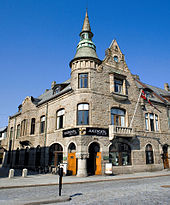 Kaiser Wilhelm of Germany had often been on vacation to Sunnmøre. After the fire, he sent four warships with materials to build temporary shelters and barracks. After a period of planning, the town was rebuilt in stone, brick, and mortar in Jugendstil (Art Nouveau), the architectural style of the time. The structures were designed by approximately 20 master builders and 30 Norwegian architects, most of them educated in Trondheim and Charlottenburg, Berlin, drawing inspiration from all over Europe. To honor Wilhelm, one of the most frequented streets of the town is named after him.

The town has an unusually consistent architecture, most of the buildings having been built between 1904 and 1907. Jugendstilsenteret is a national interpretation centre, visitors can learn more about the town fire, the rebuilding of the town and the Art Nouveau style. Ålesund is a partner in the Art nouveau network, a European network of co-operation created in 1999 for the study, safeguards and development of the Art nouveau.

The term "Little London" was often applied to the community during the occupation of Norway by Nazi Germany due to the Norwegian resistance work that took place here. Among other things, the city was central to the flights to Scotland and England.

The second largest island, Ellingsøya, used to be accessible only by boat or by road via Skodje Municipality, but the undersea Ellingsøy Tunnel was built in 1987 to make traveling between the island and the town centre more convenient. The tunnel is 3,481 metres (11,421 ft) long, and was upgraded in 2009.

Situated 236 kilometres (147 mi) north northeast of the city of Bergen, Ålesund is adjacent to the Hjørund and Geiranger fjords, the latter being on UNESCO's list of World Heritage Sites.[13]

Panoramic view of the town of Ålesund, Norway, from partway up Aksla, a hill that overlooks the town

Ålesund has a temperate and heavily moderated oceanic climate (Köppen Cfb). Winters are mild, damp and windy; the coldest month of the year, January, has a mean temperature of 2 °C (36 °F).[15] The lowest temperature ever recorded at Ålesund Airport, Vigra was −11 °C (12 °F).[citation needed] The climate is extremely mild for the latitude and inland areas at similar parallels especially in lowland Sweden see much hotter summers and colder winters. The warmest temperature ever recorded in Ålesund is 34.4 °C (93.9 °F).

The following climate data is from Ålesund Airport, Vigra, on an island in the sea near Ålesund in Giske Municipality. Ålesund itself is more sheltered and has warmer summers.

All municipalities in Norway, including Ålesund, are responsible for primary education (through 10th grade), outpatient health services, senior citizen services, unemployment and other social services, zoning, economic development, and municipal roads. The municipality is governed by a municipal council of elected representatives, which in turn elect a mayor.[17] The municipality falls under the Sunnmøre District Court and the Frostating Court of Appeal.

The municipal council (Kommunestyre) of Ålesund is made up of 77 representatives that are elected to four year terms. The party breakdown of the council is as follows:

The town of Ålesund has the most important fishing harbour in Norway. The town's fishing fleet is one of the most modern in Europe. Ålesund and its surroundings also has a large furniture industry. Some well-known household items are manufactured here. In the 1950s and 1960s, Ålesund was one of the chief stations of the herring fishery business.

In relation to the relatively large fishing fleet belonging to Ålesund and nearby harbours a large shipbuilding and ship equipment industry has evolved. There are not any yards building ships in Ålesund any more, the last shipyard - Liaaen Shipyard evolved into ship repairs and since late 1990s has mainly been serving the offshore industry through the company Liaaen Technology that merged and rebranded to Strata Møre in 2007. In the close by communities however shipyards continue to operate successfully: Vard, Ulstein Verft, Kleven Maritime, Havyard Group.

When oil was found in the North Sea in the 1970s the local fishing fleet ship owners seized the opportunity and rebuilt fishing vessels to serve the infant oil exploration and production industry. Soon they were able to build purpose designed offshore vessels at local shipyards to serve the North Sea oil adventure even better. Today this has become a cornerstone industry in and around Ålesund through leading offshore supply ship owning companies Farstad, Bourbon, Olympic, Havila, and Rem. Serving the ship building industry a large number of equipment manufacturers has evolved: Rolls Royce, Odim, Sperre, Optimar, Ship Equip, Jets and many more.

To the east of Ålesund lies the Sykkylven Municipality where the Ekornes factory, producing furniture such as the StressLess chair, is located. Håhjem, another village near Ålesund, contains the headquarters of the Stokke company. Ålesund is also one of the harbours at which the Hurtigruten arrives two times per day. As the cultural center of the region and with close proximity to the fjords, Ålesund is a tourist attraction.[42] The Atlanterhavsparken aquarium is another tourist attraction.[43]

From Øye at the head of Hjørundfjorden, a road strikes south to the Nordfjorden, and from Maråk on Geirangerfjorden another strikes inland to Otta. The Rauma Line starts at Åndalsnes, 120 kilometres (75 mi) east of Ålesund, going to Dombås, then southwards on the Dovre Line to Lillehammer and Oslo. Ålesund is a port of call for passenger and freight vessels travelling between Bergen, Kingston upon Hull, Newcastle, Hamburg, and Trondheim, including the Hurtigruta (Norwegian Coastal Express) cruise ships, which arrive in Ålesund twice a day.

The town's airport, Ålesund Airport, Vigra, has several daily flights to/from Oslo, Bergen, Trondheim, and Copenhagen. It used to have several weekly flights to/from Riga (Riga International Airport) (AirBaltic) and London (London Gatwick Airport) but these routes have since ceased. In November 2012 KLM announced it would fly to Ålesund 5 days a week from Amsterdam starting in April 2013.[44]

Lately, there have been suggestions[clarification needed] of a high-speed rail link to Oslo, Bergen, and Trondheim, as well as metro-style local services to meet the needs of the expanding population of the town[citation needed].

The inner harbour in winter

The Norwegian Centre of Art Nouveau Architecture, Jugendstilsenteret, is situated in Ålesund. It is a museum and competence center with exhibitions telling the story of the town fire and Art Nouveu/Jugendstil in Norway and Europe.

Sunnmøre museum,[45] founded in 1931, is an outdoor folk museum devoted to the Norwegian coastal culture and way of life. Located on an area of 120 hectares (50 acres), it has more than 55 old and distinct houses from the past 300 years moved to the site, replicas of old Viking ships, and the Medieval Age Museum with artifacts from excavations of the old trading centre.

The local newspaper is Sunnmørsposten, founded in 1882 and published six days a week. The newspaper Arbeidernes blad was briefly published in Ålesund in 1898.[46][47] Ålesund is the site of the annual Norwegian Food Festival.

Ålesund is home to a sub-division of the Norwegian University of Science and Technology (NTNU), with approximately 1,800 students and 150 employees. The Ålesund School of Art (Norwegian: Ålesund Kunstskole) is a school for visual arts located in Ålesund. The Norwegian School of Management had a campus in Ålesund, but it closed on 1 August 2008.[48]

The local football team, Aalesunds Fotballklubb ("Aalesund's Football Club"), (AaFK), was founded in 1914. The team played in the Norwegian top flight for the first time in the 2003 season. The club won its first Norwegian Cup in 2009 and won again in 2011. They played their home matches at Kråmyra Stadium until the 2005 season, when they relocated to the new Color Line Stadium, located approximately 1 kilometre (0.62 mi) outside the town centre. AaFK's supporter club is called "Stormen" and has about 2,000 members.

Mark Kozelek wrote and performed an eponymous song about Ålesund under the Sun Kil Moon moniker, on the record Admiral Fell Promises.
Ålesund was shown briefly at about the 20:17 mark in the 1969 film, "It's Tough to Be a Bird," by Disney. The town is shown being stepped on by an enormous bird foot.

Ålesund is twinned with several towns[51]